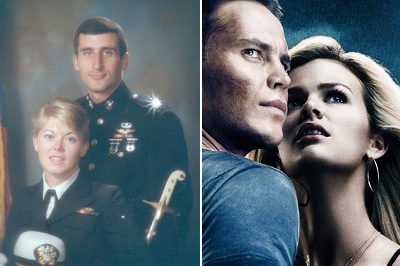 Dennis: The only person who didn't comply with military demeanor was the admiral, Liam Neeson. He had a borderline haircut violation. He needed a trim. Everyone else looked ship-shape and squared away.

A.B.: And he would tell him so. I almost wish they could go back and touch that up. I'm sure it didn't bother anyone else watching the film, but they went to such a great effort to make sure everyone else was regulation with the proper trim and sideburns, and then you have the admiral up there with the little curlicues in the back of his collar. Sorry, the Fleet Admiral of the Pacific Fleet would never be caught in public looking like he just woke up.

D: The ribbons are a good tip-off about a movie's accuracy. Usually, the ribbons are out of order-they're put together by someone in costuming who doesn't know about the military-so if a character is wearing a lower-precedent ribbon above a higher-precedent ribbon, that would be a critical error that no one would make in the military. It would show a callous disrespect for order and conduct. But all the ribbons in Battleship were appropriate and worn correctly.

AB: I think the chief (John Tui) did the best job in terms of coming across as a real Navy chief. In the Navy, they're called the backbone because they aren't officers, but they know how everything works and they're in charge of the enlisted. The way he went and spoke to Taylor Kitsch sbout how he needed to get his head out of his ass and lead the ship was what a chief would do. And he was a little heavy, which most chiefs are.

D: And Rihanna, that cute little pixie that she was, the only thing we take exception to was that she never lost her cap. She could be doing cartwheels across the deck or go underwater and she always had her cap on.

AB: And you don't wear a hat inside the ship.

D: I assume she's a crossover entertainer of some sort because anyone with one name is usually a diva in the industry. A singer or a dancer?

AB: She was very believable as military because of all the muttering under her breath. All the "Shut up and eat your fried chicken" banter is very common. She had one earring violation, though. In the beginning, she had regulation earrings on-you're supposed to have quarter-inch round silver balls for enlisted. But at the end when she was in her whites, it looked like she had diamond studs in.

D: And no one is running around during training excerpts with that many live rounds. You may have some in the magazines, but you're not running around RIMPAC with fully loaded cannons and missile launchers. So if you were in RIMPAC and you did see a strange alien ship land, you wouldn't have those weapons at your disposal.

AB: Also, you wouldn't send your tactical officer and your chief and your weapons person on a raft out to check out a mysterious ship. They're the ones directing the action, so you wouldn't put them on an exploratory boarding party.

D: And when all three ships were approaching the alien craft, you'd never be in close proximity like that. That's a photo-taking formation-you get all the ships within a couple thousand yards of each other and take photographs. If you're in battle, everything is separated by miles. In a situation like that, if you've got no contact with the outside world and there's a perceived threat, you would not come to a dead stop in a water-that's heresy in the Naval service. You'd be steaming around and flanking them at top speed, trying to confuse their targeting information.

AB: One thing that threw me completely in the beginning is that the main guy, Taylor Kitsch, is a loser in life. And then his brother convinces him to join the Navy, but to get to where he was on the ship, that would have been like eight years later minimum-probably 10. But nobody's aged a bit, everyone is still stationed in Hawaii. I'm looking around going, "Everything stood still while he got commissioned, got his Navy training, got his surface warfare commission, and became a tactical officer on a ship?" That'd be a decade.

D: It's also totally unrealistic that Taylor Kitsch didn't know he was next in line to lead the ship. For him to walk onboard and go, "Who's in charge here?" c'mon, if you're third in command, you know that. People know the chain six-deep-it's part of your training. It's like the English monarchy-everyone knows the line of succession.

AB: But even though they were trying to kick him out, there are guys like that in the military. The Navy is just like everywhere else in life: you have people who are brilliant, stupid, hot-headed, bullsh--ters. It's just a cross-section of life. At some level, especially during wartime, they want you to be a little crazy to do what you do. But then there's a point where that's no longer tolerable. I don't know that fighting with another officer would you get kicked out. You'd probably get reprimanded and you'd probably never get promoted. Nobody would respect you. And the Japanese guy was a captain, which is three ranks above Taylor Kitsch. Junior officers might have gotten in a scuffle and tried to cover it up, but these guys were a little old for that. It's like being 35 years old and short-sheeting someone's bed.

D: In movies, combat gets reduced to an athletic contest. Thousands of people have been wiped out in the last 48 hours, and then they sink one of the alien vessels and the soldiers break out in euphoric fist-pumps. In real life, if that much damage was done to Honolulu, people wouldn't right away go and give everyone an award. Everyone's walking out hand-in-hand all idyllic and smiling, wearing their aloha shirts like it's a beautiful day in Hawaii even though there's been mass casualties around the globe.

AB: The end was too trivial. People don't usually stand in formation and hoot, hug and clap in uniform. But I suppose if you've just saved the planet, you can throw caution to the wind.

D: I flew in one of the scenes at the beginning of Top Gun-you can see my name in the credits-and I was thoroughly disgusted by the end of the filming process and debrief. At one point, I went to the operations officer-the guy who schedules-and told him, "Don't ever put me with these bozos again." I'm a hot-blooded Marine aviator so the furthest thing I wanted to do was sit with a bunch of film people who had no idea what our profession was. The brief prior to the flight is sacrosanct. You don't talk, you don't screw around, but halfway through the brief, the doors flung open and these minions-the assistants to the assistants to the assistants-came running in with food and turned it into a big breakfast party.

AB: At one point in time with the draft, although your experience could have been shorted or very bad and you didn't want to be there, at least you or someone close to you had military experience. Now, maybe one percent of Americans may know something about the military. It has to be portrayed as a sporting event to get the audience to understand. I'm sure it would be the same way if you tried to film a board meeting at a Fortune 500 company-people don't know the world, so movies just have to make it entertaining.

D: At least Top Gun was highly successful for Tom Cruise and the military. It was a recruiting bonanza. I thought Top Gun was going to be a dismal failure. It was a cliche-filled, sophomoric movie. It was frivolity. But that's how they make it entertaining. Take a PBS tape of the Iraq War and people are going to get bored. They're not going to appreciate the carnage and the tension and the stress and the intensity. The language we know as military professionals isn't the language of the movies. Movies want those high-five, pump-them-up lines, and in the theater we saw Battleship, the people there loved those cliché one liners. But those make it less believable.

AB: Like when Rhianna initiates the firing sequence, she says, "Mahalo, motherf--kers!" Mahalo is Hawaiian for "thank you", which had me scratching my head-maybe it ought to have been, "Aloha" which in the military is often substituted for the likes of "Sayonara" or "Hasta la vista, baby." Aloha is a more universal word-it can be used for hello, good-bye, love, welcome, caring.

D: They fed a couple of the good lines to the old geezers. Didn't one of them say something about someone's going to "kiss the donkey"?

AB: We didn't realize it was based on the game Battleship until they flashed Hasbro on the screen. We're a little out of it-we didn't watch Transformers. But when I saw them tracking the ships with the tsunami buoys, I thought, "Oh, this is like the game." But I could have gone through the whole movie without thinking that if I hadn't seen the Hasbro logo. People wouldn't play Battleship on an actual ship-that's like a 1960s game. They play all the new electronic stuff-nobody plays with plastic pegs. If they play Battleship in any form, it's probably on their iPhones.

D: The Navy must have cooperated with the film. Either they lend their support or they don't, and it looked like they allowed them a lot of access. Not like that Charlie Sheen Navy movie they refused to approve.

AB: Last year, we went about the USS Missouri when we were in Hawaii and it's a beautifully restored vessel. In the movie, it looked like you were no kidding inside the ship.

D: A military ship has a certain smell. You take it with you. There's fuel in the recycled water and everything is washed in that: your utensils, your clothes, your body. It smells industrial-paint, metal, plastic.

AB: But the whole thing with the Missouri was just hilarious. When you turn a ship into a museum, you pull everything. There's no engine, there's no weapons. Even if it still had it's navigational equipment, most of it wouldn't work. It'd take you two or three years to do that ship what they got it to do. But is that any weirder than having aliens? No.

D: But even though they get a lot wrong, these movies are worth it. Battleship overall presents the military is a positive light, even if it's in a make-believe fantasy world that the public chooses to accept.

Dennis DiLucente, a Naval Academy graduate, currently works at the National Steel and Shipbuilding Company (NASSCO) shipyard in San Diego. Formerly an aviator in his Marine Corps' career, Dennis' only brush with Hollywood fame was flying fighter aircraft scenes in the film Top Gun, which he predicted would be a box office failure. His wife and co-reviewer, A.B., served 28 years in the Navy and was among the first group of women assigned aboard an aircraft carrier.