Man in the Mirror: What goes wrong when a celebrity plays themself 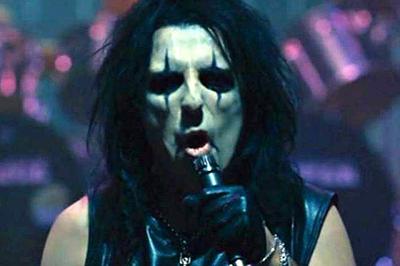 In Tim Burton's Dark Shadows, there's a rock concert by Alice Cooper. Played by Alice Cooper. This wouldn't necessarily be a bad thing, except that Dark Shadows takes place in 1972. Which means 64-year-old Alice Cooper is portraying himself at age 24. Face it people: the creaky, golf-playing Republican Alice Cooper of 2012 doesn't even remotely look like the proto-goth/glam rock/metal rocker of the Nixon years, no matter how much pancake makeup he's slapped on. And Tim Burton's biggest feat of imagination is expecting audiences to sit through an entire song pretending otherwise.

Now, Cooper's cameo in Dark Shadows is different from celebs who play a caricature of themselves, like say, when Tim Burton had Tom Jones play an alien-fighting Tom Jones in Mars Attacks! While Dark Shadows is firmly tongue in cheek, Cooper's performance is played entirely straight—right down to an exact recreation of his act. He's playing his younger self without a hint of irony.

Of course, given the rampant egos of the entertainment world, playing yourself has a long Hollywood pedigree. Not all of them fail badly, but they're all rife with unintentional comic potential. So instead of weeping to School's Out for Summer, let's look back at movies where otherwise awesome performers should have just gone with a stand-in.

Billy Idol as Billy Idol in The Wedding Singer (1998)

In the Reagan Era-set comedy's climactic scene, Adam Sandler gets help courting Drew Barrymore from none other than Billy Idol himself. Played by: Billy Idol. Now, his Rebel Yellness is actually not that bad of an actor. He delivers his lines credibly and seems to have a decent sense of humor about himself. But one thing he couldn't do in 1998 was look remotely like his younger, early MTV studliness. It's partly not his fault: Idol was involved in a terrible motorcycle accident in 1990 which almost cost him his leg, and he also suffered some light damage to his face. But that triggered an indulgence in light cosmetic surgery, and while he's enough of a fitness junkie to keep up his abs, by the late '90s, he looked more like jerky than melt-in-your-mouth steak. To ask 43-year-old Billy to play his 29-year-old self makes The Wedding Singer's affectionate '80s parody veer into full-on mockery.

Annette Funicello is a beloved icon of the Baby Boom. The most popular member of the Mickey Mouse Club went on to star in wacky beach comedies with Frankie Avalon before becoming a staple of Saturday morning television as the face of Skippy peanut butter. Unfortunately for Annette, her campy '80s comeback was interrupted by Multiple Sclerosis. And so Annette decided to write her memoir, A Dream Is a Wish Your Heart Makes: My Story, which sold well enough that a TV movie was produced. Don't worry: 52-year-old Annette doesn't try to play a 12-year-old Mouseketeer. But in the final moments of the movie, the actual actress playing the now wheelchair-bound Annette turns away from the camera and turns back replaced by the actual Annette. Intended to be a touching moment in which the real Annette motivates young children, it instead serves as an unintentionally funny reminder—and I mean this with all possible respect—that Annette Funicello just wasn't a very good actress. MS is tough, and Annette's battle with it is an inspiration to everyone. But when you're not as good an actress as the person portraying you, it's probably best to remain behind the scenes.

Michael Mann's limp 2001 Will Smith vehicle, Ali, wasn't the first time the life of The Champ was brought to the big screen. That honor goes to 1977's so-bad-it's-good The Greatest, notable for having had the amazing chutzpah to cast Muhammed Ali himself as, um, himself. If you've ever wondered whether Ali's legendary charisma translated to the silver screen, rest assured: it doesn't. He plays himself like someone who needs cue cards for his own wedding. The Greatest covers Ali's incredible career from the 1960 Olympics through his conversion to Islam, his legal troubles, eventually making it all the way to 1974's Rumble in the Jungle. Alas, this is also a 14-year timespan during which Ali was hit many times in the face, bulked up, and changed his fighting style away from his former fleet-footedness to one that emphasized his Rocky-like ability to take a beating. No wonder Will Smith's Ali decided to ended in 1974, before it'd have to admit this movie exists.