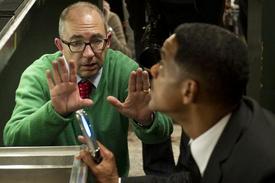 Barry Sonnenfeld is famous for his ticks. He loves fast talk, cowboy boots, and rapid-fire jokes. And those loves made him one of the kings of big budget comedy starting with a decade-long string of hits that kicked off with The Addams Family and solidified with the one-two punch of the first Men in Blacks. (Though the one film that was the most him—1999's Wild Wild West—was also his biggest disappointment.) It's taken him 11 years to return to his biggest franchise, and Men in Black III is his trickiest script to date: in it, Agent J (Will Smith) must time travel back to 1969 to rescue the younger version of Agent K (Josh Brolin) before a vengeful alien (Jemaine Clement) prevents his partner from growing up to be Tommy Lee Jones' infamous grump. Sounds complicated? It was. Sonnenfeld tells Boxoffice about literally retro-fitting Men in Black headquarters, how he's the only one who can tell Brolin's near-perfect mimicry of Jones from the real thing, and whether the fourth film should jump even further back in time or finally catch up to the liberated present by renaming itself People in Black.

Josh Brolin and Tommy Lee Jones sound so much alike. Do you think if you had your eyes closed, you could tell them apart?

I could, but most couldn't. In fact, before you finish a movie, sometimes you have temp mixes and temp screenings. Tommy was in Japan and I needed a few lines of dialogue, so I called Josh and had him do Tommy's lines just temporarily. And what's funny is, all the sound crew didn't know. I was the only one who could tell that it wasn't Tommy speaking. But I would say it's amazingly uncanny.

Were you tempted to just keep the Josh Brolin take and not even re-record Tommy?

No—I had to. But no one else would have known. In fact, several people have accused me of looping Tommy's voice into Josh Brolin's face-they think that it's Tommy doing the entire movie. Not true.

You pull off an amazing set change when you take Men in Black headquarters back to the '60s. What were your design inspirations? Were you watching Mad Men?

I haven't watched Mad Men because they talk too slow. I tried to watch the very first episode and I couldn't get through it. I'm sure it's a very good show. The design of Men in Black headquarters was hard for us because I've always felt that the Men in Black are above style and culture. That's why their suits haven't changed since the '60s and they're still wearing a white shirt and a black tie. Yet, we wanted to have fun with the era. So we wanted to make Men in Black headquarters similar but different. 2012 is different than our previous movies in that there's more three-axis curves and computers in the design. When we went back to 1969, our inspiration was simply the Johnson Wax building, which was designed by Frank Lloyd Wright in the '40s or '50s. Those things that look like golf tees that hold up the Men in Black headquarters are very similar to the Johnson & Johnson Wax building. And then, as it related to the rest of the '60s, one thing that Bo Welch, the production designer, and I don't like is chaos or too much color. We kept a very narrow palette—we didn't want a lot of drugs and hippies and tie-dyed shirts.

The public perception of Tommy Lee Jones is that he doesn't have to do much acting to play Agent K, that he truly is a man of few words. Is that true?

I find that not true at all. Will Smith and I both think that Tommy is one of the funniest people we've ever met. He's funny, talkative, erudite—at least with us. And also, people in their heads think of Tommy as being very flat and sort of monochromatic in his vocal movement, but if you listen closely, his voice has a beautiful lilt. Brolin was always on the set when we were shooting, and he had an MP3 player and headset and he would just sit there and listen to Tommy's performance from the first Men in Black. That rhythm, the vocal ups and downs are just beautiful. My wife is actually from a small town outside of Fort Worth.

Is that the story behind your boots? [They're blue, green and black eel skin cowboy boots, and they're amazing]

No. In fact, I've embraced all things cowboy since 1982 when I shot Blood Simple in Austin, Texas. My wife moved to New York to give up all things Texas and found the one urban Jew in Manhattan with a custom hat-maker in Dolores, Colorado. I wear chaps on New Years Eve.

How far back do you think the Men in Black history goes? Could there be a sequel set in the 1860s?

I think that we establish that it started in 1962. If you go back and look at the first movie, when Tommy Lee Jones is recruiting Will Smith, they're walking down a long corridor and Tommy is showing Will pictures of cranes moving flying saucers from on top of a structure where the World's Fair took place in Queens in 1962. Will says, "Oh, so the World's Fair was a cover-up?" and Tommy Lee Jones says, "Why else would we have it in Queens?" So I think it was early '60s, but having said that, I think we could get away with a whole other era. I think it means a total reboot and would mean not using Will or Tommy, but I always used to joke with Will whenever he was misbehaving on the set of Men in Black III that the next one should star Jaden Smith instead of him.

I'm picturing an 1860's one with cowboy boots and anti-alien vigilantism.

Cowboys versus Aliens—which I didn't see—may do away with any thought of going back to that era.

It wasn't until I saw Emma Thompson ascend to power here that I realized that the name "Men in Black" for an organization is kind of sexist.

You know what, another woman has pointed that out to me as well and asked if Emma is running Men in Black, isn't it old-fashioned to call it that. So maybe the fourth one, if there is a fourth one, should be called People in Black. Doesn't have quite the same ring, but I think you're right that it's an issue we'll have to deal with.

Was there any talk of having Will Smith do a song for this one?

There was talk but the problem was that Will went from finishing Men in Black III right into pre-production in a film that he's producing and costarring in with his son Jaden for M. Night Shyamalan, so he literally didn't have time. We thought about it near the end of our mix, but by the time he felt like he had enough time for him, there wasn't enough time for us. But the Pitbull song is pretty cool, so we're okay.

I've heard Jemaine Clement was in makeup for over four hours to play the villain, Boris. I'm sure a lot of him on screen is also practical effect, but what did he look like in person on the set?

He was entirely practical 95% of the time. Until the very, very end of the movie where his face opens up a little big when he gets angry. Everything else is 100% Rick Baker. Jemaine looked amazing. The funny thing about him—have you seen his work on Flight of the Conchords?—is that he's the funniest, nicest, kindest guy who you would never imagine as a villain. In fact, Danny Elfman who did the score of all three movies, is a huge Flight of the Conchords fan. I showed him the movie so he could write the score and he said, "That villain is fantastic—who is it?" I said Jemaine Clement, and he said, "No it isn't—I know Jemaine's work really well." That's how transformed he was with make-up and also attitude and acting.

Do you think that serious art fans will take issue with your portrayal of Andy Warhol as a guy who hated his own art?

I hope that serious art fans will love the portrayal of Andy Warhol because I hope that they have a sense of humor. For me, that sequence at the Factory is some of my favorite seven or eight minutes of the movie. I thought Bill Hader was incredibly great as Warhol, and Michael Stuhlbarg's performance, which you meet there.

It was great to see Michael Stuhlbarg in something not done by the Coen brothers.

I loved him in A Serious Man—I thought he was fantastic—but this is a very different role. In fact, it wasn't my idea. The casting woman, Ellen Chenoweth, brought him in to read and I thought he was great. But A Serious Man is my favorite Coen brothers movie since the one that I shot, which was Millers Crossing.

Yeah, it's a big gap. They've done a lot of good work, but as I pointed out to them, they started to pan too much. I was at the premiere of Serious Man and I told them how much I loved it, how it was the best movie since Millers Crossing, and they said, "Really, what did you like about it so much?" I said, "You stopped panning." Which is an unusual critique, but it was very tableaux and controlled and beautiful visually.

Do you believe in aliens?

I believe that we don't have a clue what's really going on. I don't know if I believe in aliens or ghosts or supernatural things. But I do know, whatever we think is true, we're going to find out ain't.