Salute Your Sacha: What's Next For Hollywood's Wildest Comedian? 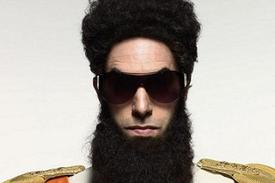 In the nine years since Da Ali G Show debuted on HBO, Sacha Baron Cohen has become one of the wittiest, ballsiest, most versatile performers in Hollywood. A ruthless mockumentarian, Cohen honed his guerrilla interview techniques on Ali G and perfected them in Borat. But the British comedian's latest film, The Dictator, finds him at a career crossroads. To avoid looking like a one-trick pony (even if that one trick is pretty brilliant), Cohen made The Dictator a scripted comedy—a wise choice, given the box office disappointment of Bruno, another mock-doc. The Dictator follows its dethroned title character, Admirable General Aladeen of Wadiya—a loose caricature of Colonel Gaddafi of Libya—on his journey to reclaim the title of "Beloved Oppressor" of his country. Have audiences tired of Cohen's mockumentary format (likely) or his flamboyantly offensive characters (also likely)? Where does Cohen stand now—and where should he go from here?

Cohen got his start as a political comedian, and that's the label that best fits him still. Like Stephen Colbert, he interviewed political and media figures under the guise of a character, though he had Ali G, Borat and Bruno to pick from. Except Colbert would never go so far as to initiate gay sex with Ron Paul in a hotel room—a stunt Cohen pulled in Bruno. He explains his use of characters this way: "Borat essentially works as a tool. By himself being antisemitic, he lets people lower their guard and expose their own prejudice." Using Borat, Cohen was particularly adept at rooting out "normal" Americans' complacency with racism, antisemitism and misogyny.

Of course, the pitfall of Cohen's tactic of embodying characters is the tendency to reinforce stereotypes about Others, such as lower-class Britons, Eastern Europeans, effeminate gays and Arabs. The Kazakh government is still miffed about Borat, and some gay rights groups criticized Cohen of doing the homosexual equivalent of "blackface" in Bruno. Likewise, some Arab American groups have accused The Dictator of trafficking in anti-Arab stereotypes, and worst, failing to even cast Arab-American actors and comedians in the film. (Besides Cohen's Aladeen, the two biggest "Wadiyan" roles are played by the British-Indian Ben Kingsley and Greek-American Jason Mantzoukas.) It's worth noting that the film targets the grandiosity and greed of Wadiya's rulers, not the Wadiyan populace as a whole. In fact, like their real-life counterparts, the people of Wadiya rush to oust their "Beloved Oppressor" as soon as they catch their first whiff of the Arab Spring. On the other hand, Arab American groups have a legitimate complaint about racial double standards in Hollywood. Imagine reversing the stereotypes: can you imagine audiences giving the same pass to an actor of Arab descent playing a Jewish villain with a hooked nose, yarmulke and gobs of money in his fists?

However audiences feel about Cohen's movies, the public has gotten increasingly tired of his off-screen stunts. In 2009, the MTV Movie Awards orchestrated Cohen's descent in full Bruno drag onto Eminem's lap. And earlier this year at the Oscars, General Aladeen "accidentally" spilled Kim Jong-Il's ashes (actually pancake mix) on Ryan Seacrest, explaining that it was the late North Korean despot's wish to attend the Academy Awards. These publicity stunts brought on Cohen exhaustion, and fast. They felt like the advertisements that they were, and the cheap shot at Seacrest was completely gratuitous. Someone with Cohen's genius at satire—and the nads of steel to suggest (or acknowledge?) the existence of a prostitution ring between Hollywood's B-list and the world's oligarchy—should be less obvious.

Interestingly, the path Cohen is most reluctant to follow is mainstream Hollywood comedy. He's teetered on its edges, starring opposite Will Ferrell in Talladega Nights as Jean Girard, a French poodle of a Formula One driver, and taking on a small voice role in the Madagascar franchise. But Cohen hasn't (yet) delved into the money pit of family-friendly entertainmen—you know, where innovative comedy goes to die, and where you'll find the bones of once-promising talents like Jack Black and Russell Brand. Unfortunately for Cohen, the common theme in today's R-rated comedies is an obsession with American masculinity, and Cohen—who's never played an American and has spoken in his native accent only once on screen (in Sweeney Todd)—comes across as too "foreign" or "European" to play a regular Joe.

Instead, Cohen's swerved left and found a series of small dramatic roles in prestige projects with big-name directors. He made his dramatic debut as a flashy huckster in Tim Burton's Sweeney Todd, and followed up as a sneering station inspector in Martin Scorsese's Hugo. Granted, in both he was comic relief, but Cohen played both roles with a gravitas that suggested untapped depths. His upcoming projects-the highly anticipated adaptation of Les Misérables and the long-gestating Freddy Mercury biopic-will lead Cohen further away from his comedic roots.

Cohen could stand at the crossroads of political comedy and drama forever, but we're curious to see what he can do without hiding behind five pounds of hair. And no matter how played out Cohen's shtick may feel, he's still the most deliriously transgressive comedian we have. And he's got the freedom to carve out his own comedy niche without being co-opted into the Judd Apatow/Todd Philips/Will Ferrell world of manchildren. So in that sense—and only that sense—Viva Aladeen!