Sugar Coating and Purpose: Nadine Labaki on her Lebanese tragicomedy 'Where Do We Go Now?' 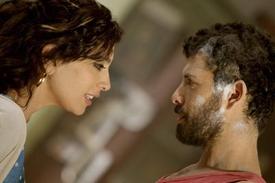 Filmmaker Nadine Labaki knows she can catch more flies with honey. Her last film, Caramel, was a gender study located in a cosmopolitan beauty shop in Beirut. Named for the melted sugar the salon used as depilatory, the title, characters and location all repeated a dichotomy: caramel helped sour women look sweet, and reminded their hardened men how to be tender. Lure, my dear, is the key.

In the case of her newest, Labaki didn't put the lure in the film: the film is the lure. After decades of civil war, her native Lebanon faced what they thought could be another prolonged conflict and her response, which she wrote after she discovered she was pregnant, was Where Do We Go Now?, a comedy about a village of war widows and bereaved mothers who connive to keep their town at peace. It's a bitter pill, particularly as the conflicts are religious, but Labaki's candy-stamp creates lightness without betraying the stakes. How does a woman get away with that without nagging, badgering, mama-bearing, or just outright ball busting? Why do the widows dance? And how can an entire war-tired nation turn this possibly inflammatory anti-war effort into the biggest box office earner their country ever had? I didn't mean to compare her to Pam Grier, but at one point....I do.

The isolated Lebanese town in your film bears no resemblance to your urbane upbringing, yet it's very convincing.

I wish my life had been that way but...you know. I don't know if you know much about war history in Lebanon but we've been living through ongoing wars for a long time and we had succeeded in living in at least 20 years of peace after the civil war, but some events in 2008, by people belonging to two opposing political parties inspired people to take arms and start killing each other again. Having succeeded in living in peace, and after being faced with such absurdity, you want to make a statement-express yourself. At that time, I learned I was pregnant with my first child, which changes your perspective. What is this world that is capable of exploding over hours? It [the conflict] lasted only a few weeks, but when that kind of thing happens you think we could be on the verge of the next civil war. I wondered: what if my son was an 18 or 19-year-old boy, temped to take guns and go to the street and do what others are doing because he wants to defend his building or family. How far would I go? What sacrifices would I make to keep him from doing it? It started with mothers, then became the story of a whole village of women trying to build peace.

Your last film, Caramel, was also about the sacrifices of women but I think the grey area between these two stories is whether women make those sacrifices for themselves of for their men.

I think it is a culture of sacrifice. We are educated that we have to sacrifice our lives for our kids and husbands. It's changing, and not only in the Middle East. Women have to make a lot of sacrifices in their lives and maybe there is something in me that is saying, "I want to share this, to talk about it" especially now in the case of this film. I come from a place that has been going through ongoing and never ending wars. I've seen so many women around me in my family that have lost children in war in such absurd ways, and wear black even until today. We see these wars have solved nothing and we've lost these souls for what? You see the suffering and want to shout it out loud. Maybe someone else might have made a painting or written an article; I made a film.

This is about religious conflict—you must have expected some challenges.

I knew there could be trouble because religion is a delicate subject, but when it came out and it was successful all over the world-it's the biggest box office in the history of Lebanon—overall, the reactions have been very positive. Of course, we do have some negative reactions from people who are a little bit conservative and shocked when you talk about religion, break the statue of Mary or see animals in the mosque, but when you get to the end of the film and see why we're doing what we're doing, people calm down and relax. Of course I knew there might be trouble but the fact we tackle this in a soft way and because I'm a woman...I'm saying it a different way. I'm saying it out loud onscreen: "We've had enough."

So the fact you're a woman changed reception?

Maybe. At the end they understand. You can't be closed to a mother's suffering. Everyone is sensitive to that. We can't help but sympathize with these women trying to avoid bloodshed, saying nothing is a good enough reason to lose a child. The women in the film say, indirectly, "we want peace."

Indirectly? You make it sound quiet but you manage power like Pam Grier. Your way with men is impressive; it doesn't emasculate, even when you read them the riot act. The power is demure but potent.

(Laughs.) Oh, I'm very instinctive, and obsessed with human behavior. I observe how people react and have a feeling I know people and know how to adapt to different personalities. It's something you also learn when you direct. I use nonprofessional actors and that teaches me how to find the keys to each person to make them be at their best—especially when they're acting. I try to make it as natural as possible. You have to know who people are, what triggers certain emotions and how to adapt to their personalities.

You just talked about your path but instead of being individualistic, it was all about the people around you. The women in your film band together—it's not about individuality and that may be anthropological for a lot of Americans.

Oh, we could achieve so much if more people came together to create movements. That's how you create change. We should be aware of how powerful each of us can be and really achieve change. Unfortunately, most of us think, "oh, what can I do?" We have an attitude that if we're working alone we can't do anything and I truly don't believe in that. I believe in the power. If we all know how powerful we are, things can change. This is how I became aware of the power of filmmaking and of cinema. I see how it has an influence on people. It has an impact on me personally. When I take two hours off and escape my world and life and responsibilities, I'm waiting for those two hours to be worth it. I want to feel emotions, laugh, cry, understand things about the world, make a change in my life. I'm waiting for so much from these two hours and I think they do have an impact. How many times have you changed your perspective or something you do because of a film or a sentences in a movie? I'm aware of how powerful it can be and I want to profit from this. I say: "I have a film." It has to be entertaining, but let's take entertainment and turn it into something bigger than entertainment. That's what I'm trying to do in my own field but if someone else figures out how they can make change in their own fields we could make some real change.

A death threatens to throw the village into conflict-was the religion of that character chosen to reach the broadest audience possible?

No. There was one thing I needed to tackle: sometimes we misinterpret events and that misinterpretation leads to conflicts. The first death was an accident, but the mother knows how her other son will interpret it—he'll see a death caused by the other party because they have a history of blood. There's a saying in Arabic: "blood doesn't turn into water." What that means is if there's been blood between two parties and there's been no forgiveness, the blood will always bring revenge. I wanted to talk about how sometimes, unfortunately, we want to believe things because it's what we're accustomed to believing. But the religion of the first death was random.

How many other women filmmakers are there in Lebanon.

A few. There are not many filmmakers in general. I couldn't say percentage, but we're maybe three or four women.

Is it a phenomenon or a non-issue that you're...

Well, it's a different context, yes? I'm wondering what your experiences are there. Your gender may have helped reception, but what about production?

Does this minimum of crew and resources fuel the family environment you have in your features?

(Laughs.) I tend to work with family not because they're family but because they're talented. My sister (Carloline Labaki) was my costumer-she's also a filmmaker but I needed a costumer and we're close so she helped me. My husband (composer Khaled Mouzanar) is very talented. I'm very lucky to be married to him, not only because he's talented, he's a good man, but he's also very talented and it was only natural to work with him. He was there all the time. We write from home and he listens to conversations and our debates, sometimes interferes or gives ideas. He's there when the film is warm and the music comes very naturally for him. Even with the rest of the crew, it's important to have a human connection. For me it's not a job, it's a human adventure, and it has to be. You should see how it is on the sets! It's fun and it's warm and it's such good positive energy because it's very rare to make a film in Lebanon and so you have an army of people helping and participating. You should see the people in Lebanon praying for an Oscar, lighting candles and telling you they're proud in the streets. The crew is family too.

The dance cycle in the beginning—

You want to know what inspired it. I don't know if you've seen these images on TV of these women that mourn their children—sometimes the suffering is so big they hit themselves, tear their clothes, pull hair, hit their heads on the wall and it's a very aggressive way to express their anger and sadness and I've seen this image since I was a child. I've always been fascinated with this image and by all these women in my family that are still wearing black today. They've lost children in the war in very absurd and violent ways. How do they do it? How do they keep living? The dance is inspired by these women. I wanted to create a dance that would be a ritual of mourning. The movements demonstrate these women are broken from the weight of their suffering and this is how I started the film-instinctively. It came very naturally to me and it's a tribute to these women.

Tags: Where Do We Go Now?, Nadinke Labaki
Print