Too Preoccupied for Ps and Qs: Maïwenn on directorial debut 'Polisse' and what pisses her off 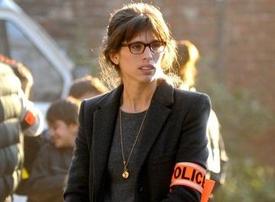 French multi-hyphenate Maïwenn (previously Maïwenn LeBesco) has produced a number of stage productions, including a one-woman show, and has a name in France as an actor, but Polisse, a cop drama about the perilous job of working in the Child Protection Unit in France, is the project that's won her extensive acclaim. Splitting screen time between the victims of domestic crimes (mostly sex offenses) and the police officers that intervene, the film avoids both hero—making and moralizing—even if sex crimes against children are the single clearest case of victim and victimizer law enforcement ever sees. Maïwenn seems particularly interested in preventing the infiltration of opinions of any kind and doesn't represent her film so much as defend it. (Her methods in this are less than conventional.) When she spoke to Boxoffice she has lots to say about topics she doesn't want to discuss and (sort-of) addresses directorial perspective and what she and her translator refer to as "emotional points of view." Also, in the context of this interview she calls me sneaky, asks me why I don't do the interview myself and uses a distribution representative as a human shield—like my questions were ninja stars. Read on...

This is your directorial debut* and those are usually personal or sensitive. Why did you choose this subject?

I fell in love with the subject and decided to make a movie about it.

I've heard that involving kids in films makes an audience immediately vulnerable. Do you think that's true? Was this a consideration?

No, I didn't calculate how to push the audiences into vulnerability. Right now the movie has been such a big success in France and I had so many prizes but I haven't forgotten how hard it was to build this movie—to write it or make it happen. People didn't initially believe in it.

No. When I went to my producer and he said he'd start looking for money to make this, it wasn't easy. Right now you can say "oh, this is glamorous and kids" but no, it's not the truth.

That makes it sound like the people behind the scenes were surprised by the film's overwhelming success.

Obviously there's a difference between the people who believed in the film and those who didn't.

Of course. So are you saying the detractors couldn't see the potential success of the film?

The people that were not interested said ‘what's the point in making a movie about this problem, it's too dark, too dramatic, there are so many movies about the police already' they were condescending and said it wouldn't make money.

That's interesting. As if police procedurals aren't popular because they're lucrative.

I'd rather talk about the people who believed in the movie, the people that didn't make the film don't deserve the talk. I respect them.

Ok, did you have any public service or activist goal for this picture?

I did not do this from a point of view. If I wanted to push a point of view I would have made a documentary. I promise you if Michael Moore had made a movie about this subject he would have given a point of view and I could have done that but I thought that was a narrow way to do it. I am not that well-read in the political side of the subject, I am interested in the emotion. My cops here are not heroes or villains, they are flawed. In France, if you have money, you're bound not to like the cops. I didn't want to belong to any side of opinion. I have my own ways and I don't give a damn. In show biz they have their own view, too.

Polisse doesn't take one case to trial, or treat cases in the manner of a procedural, instead you have a lot of different cases and show them quickly, so we see a broader view of the work at the Child Protection Unit.

What was your question?

Why do you do it that way? I asked why you chose this subject and I want to know if it was the police or the kids that compelled your interest.

I'm not trying to be sneaky.

But you ask something political then something about my movie. That's sneaky.

I'm just trying to figure out your objective.

There is no objective.

You didn't make a film, and apparently a challenging one, for no reason.

But I wasn't making a film to push an emotion or a point of view.

But if you're telling a story you are a point of view, no?

No. I said NO. Do you want to do this interview instead of me? You can be sensitive to a subject without having a point of view.

To Interpreter: Am I using the wrong word? Maybe she thinks I mean "agenda?"
Interpreter: No. When you tell a story it doesn't have only one interpretation.

Who's interpreting? Are you talking about the audience?

So, Maïwenn, because you have an ensemble instead of a protagonist you have more than one point of view?

Interpreter: I get this a lot with French and English speakers. When you're French, you produce a piece of art and you don't believe that it's—
Maïwenn: Artists have a point of view and they will say "yes, I think this way" but in my movie I didn't want to push that on the camera. And I'm not aware enough and read enough to have a political point of view. I have an emotional point of view.

I was using the word "sympathetic" before—
Interpreter: it has a different meaning in French. Emotions aren't just sympathy they're rage and fear, emotions is not just liking. The emotions make you think of something. Her job as a filmmaker is to make you feel and then your job, as a viewer, is to think.

As opposed to acting? You're interest is observation?

I'm fed up of your question. It's not focused on the movie. These are not questions on the movie. You're asking nothing about my characters.

Your movie can have an effect because people will see it—

I know. I've been talking about this movie for 2 years now you can't tell me what effect the film will have.

I don't know what effect the film will have. I'm just trying to figure out why it matters to you or audiences
.
Your questions are not focused on the movie. This is the first time I've received this kind of questions. I'm not a psychologist or a social person. I'm just a director.

At this point, Maïwenn asks the interpreter: "What do you think?" The Interpreter says to me, "You believe art is for a purpose, to make people act."

Actually, I don't believe that. If I'm redundant it's because I want to understand and I don't yet.

Come out here, Lauren (Lauren's an IFC rep traveling with Maïwenn). Come out and listen to her question. Can you believe it? Here—she's here. Ask her your question.

I asked if her film was interested in inciting involvement or action.

Distributor rep to Maïwenn: Some films are interested in telling a story to provoke-

LOOK AT THE TIME! It looks like our time is up thank you so much have a great day good luck.

*Note: Polise is actually not Maïwenn's directorial debut. She directed Actress, Ball (2009) and Pardon Me (2006) prior. The writer apologizes for that error.