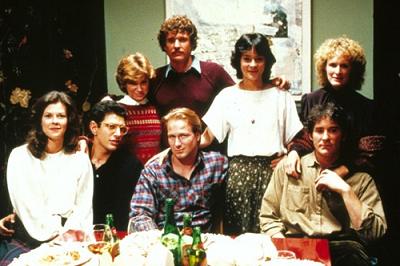 If you're like most moviegoers in America, you'll see The Avengers this weekend. And in addition to the gigantic action scenes and expensive special effects—and of course, Robert Downey Jr's almost superhuman charisma—you'll notice that The Avengers is at its core, an A-list ensemble drama. (Albeit one with cosmic villains and Scarlett Johansson's distracting hotness.) That's thanks to director Joss Whedon who on TV shows like Buffy the Vampire Slayer pioneered using action-packed fantasy to tell complex stories starring multiple, equally important characters.

Even by its singular titles (Spider-Man, Iron Man, Batman) it's clear that the superhero genre has long meant a single star with perhaps one or two famous costars. But now that Whedon has turned the superhero flick into an ensemble drama, it got us thinking: Could the reverse be possible? Can a sprawling dramedy become a superhero flick? Answer: yes. And to prove it, we've re-imagined how these three famous ensemble films—The Breakfast Club, The Big Chill and Stand by Me—and re-imagined as blockbuster action movies.

The Ensemble Picture: The Breakfast Club

John Hughes' teen drama legitimized teenage characters as thinking beings with complex feelings. Even more, it managed to wrangle a collection of famous kids into working together to bring out the best performances of their careers. The result was the gold standard of teen ensemble flicks. But wouldn't The Breakfast Club be even better with super powers? You already have a group of misfit teenagers forced to work together to defeat a stern overseerer who uses his powers for evil. And there's even an action scene midway though! All you need is the right premise. I think we might be able to genetically alter one for you.

Their Superheroic Counterparts: The X-Men

The maladjusted Gen Xers of The Breakfast Club are just a couple of plot points away from membership in Professor Xavier's School For Gifted Youngsters. Judd Nelson's mean spirited and dad-abused Bender might be a dick's dick, but yet he also has a heart of gold (kind of). He's obviously to fill the role once occupied by Wolverine—just make sure no one mentions how his dad gave him adamantium claws for Christmas. Anthony Michael Hall's ubernerd Brian used to lie about having a Canadian girlfriend. Now, he's capable of experiencing Canada's wild cold for himself, thanks to becoming the new Iceman. Ally Sheedy's Allison has a dandruff and creepy tendency to fake having to be in detention—she's perfect for the life force-draining Rogue. And Emilio Estevez's popular Jock Andy and Molly Ringwald's rich bitch Claire? There's no question they're Cyclops and Jean Grey. It's the only sensible reason Claire would ever hook up with Bender—sorry, with Benderine—at the end of the movie.

With the help of the Marvel universe's tendency to subject random people to dangerous chemicals, we can easily fit in a hastily written back story in which a radioactive meteor strikes a Chicago suburb. Suddenly our band of juvenile delinquents are a band of "gifted" youngsters in need of training to handle their new-found mutant powers. But be careful: they still have to deal with Principal Verner, and his mutant power. Just remember not to mess with the bull: you get the horns.

The Ensemble Picture: The Big Chill

Picture this: a group of aging, adrift friends reunite after the death of one of their own. Inadequacies are explored, infidelities flirted with, political changes over their lifetimes examined, and a whole giant bunch old nostalgic music is played. That's the premise behind Lawrence Kasdan's seminal Baby Boomer navel gaze, The Big Chill. After Alex (an ended-up-on-the-cutting-room-floor Kevin Costner) commits suicide, all of his college friends gather at the home of Harold and Sarah to mourn him, and kick off the most annoying part of the Baby Boomers' endless self-celebration, the "everything-was-better-when-we-were-kids-maaaaan" part. That remember—when stuff is tedious, but it could become a hell of a lot more enjoyable if it had copious amounts of destruction.

Like The Big Chill, Watchmen is also a rather clever take on Baby Boomers as it looks at the '60s and '70s as if the postwar generation never relinquished their cultural dominance. That's largely thanks to the existence of super heroes, who function as extranormal police state cops during the Vietnam War era. And like the tortured fascists-in-tights of Watchmen, the aging Boomers of The Big Chill have secrets, dysfunctions and deep regrets of their own. Watchmen even takes place two years after The Big Chill in an alternate universe version of 1985. Why not make the ties official by bringing the two franchises together?

Kevin Costner's early death makes him appear to be a lock for the sociopathic government assassin The Comedian, but he lacks one thing The Comedian needs: the ability to look good with a mustache. Fortunately, The Big Chill already has Kevin Kline, who looks just dandy with every variety of 'stache. Meanwhile, William Hurt's Nick has been suffering from impotence, just like Watchmen's Nite Owl, and like Nite Owl, he rediscovers his sexy mojo in the arms of a much younger woman, which makes Meg Tilly the only possible choice for the new Silk Spectre. Unfortunately, there's no big bad in The Big Chill, unless you count suicide (don't do it!), but that's fine, because Kevin Costner would make a fine Ozymandias, even if we'd have trouble believing his laid back Midwestern charm could possibly engineer the destruction of New York City. As for the only Watchmen with real superpowers, Dr. Manhattan? Cast Jeff Goldblum, the only member of the cast with a proven super power: the ability to save the world with product placements in Independence Day. Plus, who doesn't want to see Jeff Goldblum totally blue and naked? Ahem.

The Ensemble Picture: Stand By Me

The greatest movie to ever hinge on the performances of four preteen boys, Stand By Me has remained essential viewing for nearly 30 years, and not just because it's the only time Corey Feldman managed to evoke an emotional response from an audience. Director Rob Reiner wrung amazing performances out of his four leads—Wil Wheaton, Corey Feldman, River Phoenix and Jerry O'Connell—but everyone involved was great, even Kiefer Sutherland as cartoonish bully, and John Cusack in a five-second cameo as The Tragically Dead Brother. And to think, it all hinges around the quest to find a dead body in the middle of the woods.

Their Superheroic Counterparts: He-Man and the Masters of the Universe

Speaking of dead bodies, the villain of the He-Man franchise is a thing calling itself Skeletor, whose face is an exposed skull. And he lives in a creepy castle in the woods. He also surrounds himself with a cohort of ridiculous, very cartoonish thugs with names like Beast-Man, Mer-Man, and Evil-Lynn. And He-Man? He's actually the alter ego of a mild-mannered, pink shirt-wearing prince named Adam, who transforms into He-Man whenever he raises his magic sword into the sky and says some magic words. His best friends include a mustached soldier named Man-At-Arms, a steel-encased bruiser named Ram-Man, and a slick-talking actor named Man-E-Faces. Obviously, this is almost exactly the same as Stand By Me.

Kiefer Sutherland is the obvious choice for playing Skeletor. He's already proven he's willing to do anything to get the job done over eight seasons of 24, including, presumably, take over the world. Former fat kid Jerry O'Connell is obvious as some kind of He-Man ally who has the super ability to grow up to be known as the The Fat Kid From Stand By Me even after he buffs up and becomes catnip for the ladies. Cory Feldman is perfect to play grizzled soldier Man-At-Arms, so long as the character's back story is changed to include references to World War II. And Prince Adam is obviously meant to be played by Wil Wheaton, who's not only known for being mild-mannered, but in Stand By Me plays Gordie, an aspiring writer who has mastered the only weapon mightier than a magic sword: the pen. Plus, he has the power to change into the most beloved geek on the Internet.

But what about poor John Cusack? Easy: He's He-Man's long lost twin sister, She-Ra. Give or take 20 years, and a Y-chromosome.

Tags: The Big Chill, Stand By Me, The Breakfast Club
Print