We Ask 'Avengers' Co-Star Tom Hiddleston: Is He Evil Or Just Misunderstood? 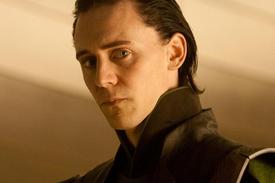 What's a Cambridge grad doing in May's biggest blockbuster? Having the time of his life. Last year, pedigreed actor Tom Hiddleston watched his career explode after playing Loki, the brilliant, elegant and deeply bitter younger brother of Thor. Savvily, Woody Allen and Steven Spielberg had already given him high-profile roles in their films Midnight in Paris and War Horse just for being cast in Thor—they knew that between Hiddleston's brains, talent and blockbuster breakout role, he'd be transformed into Hollywood's next hot property. Now for The Avengers, Hiddleston returns to the part that made him a burgeoning star with a script that puts him center stage. How's the charismatic Brit handling the pressure? With humor.

It's got to be a compliment that it takes seven superheroes to defeat...just you.

I think it's a compliment to Loki, not me. But it was a huge challenge because I thought to myself, "I've got to really bring it here." It was my privilege to work with all of these amazing actors—so yeah, I guess it was a compliment.

In Thor, the power dynamic was really clear: Loki was the brains and Thor was the brawn. But now you're facing down rivals—Tony Stark, Black Widow—who are as clever as you.

I still think that Loki runs rings around them for the first two-thirds of the film. And really, he's undone by his hate. If the film teaches anything, it teaches that hate is ultimately misguided and will get you nowhere, because that's your flaw. Anyone who hates that hard is incapable of self-sacrifice, and is therefore destined to lose. So he's not outwitted, he's out-felt by the Avengers. The Avengers have the capacity to overcome their differences and reduce their egos for the greater good. Loki has no interest in the greater good.

Thor seems to think there's still some good in Loki somewhere. Do you think that's true?

For sure. I think the opposite of love, as someone said, is not hate but indifference. And Loki hates Thor. Which means somewhere underneath all that, he still loves him, because love and hate are united by passion. The big question for me now is: can Loki be forgiven by Thor? And can Loki forgive himself?

And: can Loki accept forgiveness?

Yup—he's really fallen into the dark side. He's let go of so much and he's yielded to a kind of pathology. He's a full-blown malevolent psychopath.

Even knowing that, to play Loki, you must have sympathy for him. So what was it like at the premiere hearing people cheer when you get punched in the face?

I know I've done my job! [Laughs] The heroes have to win. But acting, for me, is an extension of compassion. My job is to find sympathy where society refuses to. People like Loki are often locked up and judged and reviled—and rightfully, kind of, chastised and castigated and lionized. My job is to find the humanity in him. Ultimately, underneath all of Loki's hatefulness and spite is a lost child. I have to get underneath the skin of that. He's just someone who is so lacking in self-esteem, all he needs is true affection, I guess. It was weird—it was weird to hear the cheering—but it was satisfying because in order for the film to work, the audience has to hate me in some way.

Loki uses this magic staff to control what people say and do. If you could use that on a person in real life—for good or evil—who would you pick?

I don't know if I could do it—it's just so manipulative! But who would I choose...? All the most powerful political leaders, all the people with the loudest voices? I think if I had anything that I would like to leave behind as sort of a message, I'd want people to understand the primacy of kindness. The power of it to change the world. Maybe it would be someone like Obama—but he's doing pretty well. He's already a good guy. He doesn't need the staff. So somebody with a loud voice, and I would change them for good, not for evil.

On Twitter, you've been rallying a #LokisArmy. What would you say if a fan took you seriously and said, "I'll do whatever you want"?

My god! I'd tell him it's all pretend—not for real. Go home and get some sleep.