'What to Expect When You're Expecting' Co-Star Wendi McLendon-Covey Talks 'Bridesmaids 2,' 'Magic Mike' 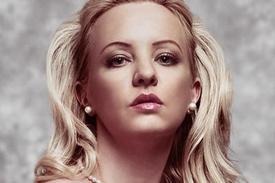 People have laughed at Wendi McLendon-Covey for years, and she loves it. The Groundlings comedian springboarded from the stage to Reno 911! and then watched her career skyrocket after she was cast as a crass housewife with two icky teenage boys in Bridesmaids. In her next big role in What to Expect When You're Expecting, McLendon-Covey plays an aquarium manager and mom who teaches her employee Jennifer Lopez about parenting while her own onscreen husband (former Reno 911! castmate Thomas Lennon) gripes about the fancy foreign name she gave their baby. (C'mon, Henri is cute.) Though McLendon-Covey has become the face of modern motherhood, she'd rather have kittens than kids. She tells Boxoffice how grumpy moms taught her about parenting, opens up about sexy dancing with Channing Tatum and then getting cut from Magic Mike, and argues why the sequel to Bridesmaids should take place at a funeral.

This might surprise people who know you as a comedian: You wept the first time you read the script for What to Expect When You're Expecting.

I did—I did! I read it and I was like, "Wait a minute, this script is good." Because, you know, it's a how—to book so how do you write a script out of that? But some of the storylines put a lump in my throat and I really was moved. I was like, "Oh god-this is really good."

Were you also crying with excitement that you'd get to hang out with a bunch of giant sea creatures?

Yeah, maybe that's what it was. I kept trying to slip and fall into the aquarium, but it didn't happen.

Although, dolphins are dangerous.

I hear that. I was going for the whale shark because it's the size of a bus. It was swimming very close to the surface and I thought if I could just slip in there and ride on its back, that would be fun for everybody.

This seems like the kind of movie where after it comes out, you're going to get a lot of women coming up to you and sharing their own experiences.

That's happening already. You know, there is something about pregnancy that makes women want to tell you every gory detail. I've lived through that with all of my friends—I'm the only one that doesn't have kids—and boy, they sure want to tell you everything. "Here's what I ate today, here's what I threw up today. Wanna look at my boobs? "Look at what my skin is doing—I'm getting horrible stretch marks." I don't really want to know any of these things, but I guess I don't have a choice.

After Bridesmaids, did you have women telling you you made them decide not to have kids?

Not that, but I did have a lot of people say [voice drops to a whisper] "I do feel that way about my kids sometimes—you said things that I wanted to say." And I'd think, "You're not a very nice person, are you?" But, look, a lot of what I said in Bridesmaids, I picked up from other places. I'm a decent improviser, but I'm not that good. It is amazing what some people will say about their kids to a stranger.

I have no kids. Nor any plans to get that going. I might have a litter of kittens. I could handle that.

You could dress them in pants.

Here, it's Elizabeth Banks who stands up and says that having kids isn't all sunshine and rainbows. But being open about the bad times is still weirdly taboo.

In this day and age, knowing what we know and having all the reality television, you still have to put on that veil of, "Oh, I love this! I've got it all under control!" Is it a coping mechanism? I don't know, but it sure is daunting. And when you do run across the rare person that had zero problems, I want to say, "Bitch, keep your mouth shut!"

My mom is one of those. She says after having me, she lost weight.

And you have every supermarket tabloid saying, "So and so just had a baby at 65 years old and she's already back down to her high school weight!" But my mom was the same way. She told me she never had to wear maternity clothes. Keep that to yourself, mom—you're not making any friends.

In the last year, you and the rest of the Bridesmaids ensemble have become the face of the future of female-driven comedies. That's awesome to be the figurehead of something great, but it also seems like a lot of pressure.

Yeah, how did it all happen? None of us even thought that far ahead. We just thought, "I hope we make our money back." But to have people use you as examples for things, to hear stories from people where they've been told, "We want your character to be like Wendi McLendon-Covey's character in Bridesmaids," or "A young Wendi McLendon-Covey," it's like-wait a minute, I'm still here! You can call me. It's interesting. I try not to think about it and I just want to be as funny in the next thing and not start relying on tricks. I feel like that happens where so and so has a big hit doing one movie and then they never stop playing the same character over and over. I don't want to do that.

Success is when you get to control your options. What's a comedy that you would love to put together?

I've been trying to figure out a way to bring to life my experience in junior high. Getting my first french kiss when I thought that was the Holy Grail. I lived in a very strict household—I went to private school until sixth grade—and then I was put into a very rough junior high school where I did not know how to cope. Seventh through ninth grade, you're at your ugliest. You're gangly, you're just all limbs, crazy teeth and braces and zits. Your hair is a disaster. You're at your most vulnerable and then you have to go switch schools to one where people are more than willing to beat your butt every day because you're weak. But you're starting to get boy crazy and people are going to parties—and your parents won't let you. I had such a rough time with it, but looking back now, it was hilarious. In a tragic way.

Today, people only think of the middle school experience as bullying. But the psychodrama goes much deeper than that.

Yeah! And you're your own biggest bully. In the wee small hours of the morning, what a middle school brain can do to a person is absolutely brutal.

My theory is that we're all still recovering from middle school.

High school gets all the attention, but it's a comparative breeze.

High school was nothing. But middle school was just rife with emotional turmoil.

By the way, I heard you shot a couple scenes for Steven Soderbergh's Magic Mike. My mental image is you surrounded by man meat.

[Sighs] I was cut out of Magic Mike. It was a little cameo thing and I was only with Channing Tatum.

It seems so hard to be an actor—especially as a woman and a comedian—to keep putting yourself out there.

I'll tell you, the thing that turned the thought process around for me was I used to go to every audition thinking they were going to pick me apart. I would second-guess myself and try to figure out what they'd want me to be. And then I figured out: they don't know what they want until you show it to them. That turned my game around. You don't know you want dessert until someone pushes the dessert cart in front of you. So I'm going to go in and do it my way, and if they like me, they'll give me the adjustment. There is no such thing as rejection, when you really think about it. It's walking through the maze: you either hit a wall and stay there, or you go find another way out.

Is there a lot of mentoring among female comedians?

I think there is, or at leas that's the way it was for me. There were a lot of nice women at the Groundlings who were like, "This is the process, and it's going to get better. But there will be a lot of ups and downs and you have to do this because you love it." For everything people say about women being catty, I haven't really encountered some bitchy ladies. I've met nice, funny ladies. Of course, if you go looking for it, you can find it. But then, you're just hanging out with the wrong women.

Is Bridesmaids 2 something you'd want to do, or would you rather push forward and make something new?

We all had so much fun doing that movie, and I think any of us would repeat the experience if someone had time to write something really good and unexpected. But everybody's so busy now. And I think it's too soon. I don't know if the studio feels that way, but I think Bridesmaids is something that should be revisited down the line. Maybe at a funeral: Pallbearesses.

Tags: Wendi McLendon-Covey, What to Expect When You're Expecting
Print