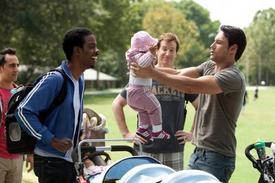 Kirk Jones isn't a woman. But the British director has fathered three kids with his wife and calculates he's spent 27 months becoming an expert on all things reproductive. We ask Jones about casting superstar actress used to tabloid attention on their wombs, if he learned anything new about women on the set, and why he revealed a truth about dads' attitudes toward pregnancy that most movies don't dare admit.

How does someone with a y-chromosome end up directing a movie about pregnancy?

I've had three children, so I kind of feel like I'm qualified enough to say what happens in pregnancy. Looking in on my wife's pregnancy from the outside, I remember thinking when we went through the whole process of labor and then having the baby, that dramatically, it was a really interesting point in our lives. It was like a story: you have a nine-month timescale, you know the baby's going to come at the end, and you work toward it. And it was genuinely some of the funniest, dramatic, scary, worrying times of my life. I recognized that pregnancy had the kind of qualities that you would hope to see in a movie.

Which is why What to Expect spends a lot of time on the dad's point of view, which is uncommon in movies?

I've seen a lot of movies where the tension is placed on the mom, which is understandable because she's the one who's pregnant. I'm a guy and I didn't physically go through pregnancy, but I do know that it affected me a lot as it was happening to my wife. What interested me about the project is that the writer Shauna Cross was able to get into the guys' heads using the dudes' group. But what she didn't do was the obvious thing, showing guys who were very caring and going to prenatal classes with their wives. She went for the comedy and the absurd, and I think it's a more honest representation of how guys feel about pregnancy. It's scary. When my wife was pregnant—especially with the first child-people would come up to me and say, "You have no idea how much your life is going to change." I'd say, "What do you mean?" and they'd say, "You don't know until it happens to you, but it's going to completely change your life."

It's a club that you can't even imagine until you're in it.

Yeah—and you have to have the baby to join. And then you find yourself saying to other people that their lives are going to change.

But even having gone through pregnancy yourself with your wife, while making the film, did you learn anything new about women?

This might sound arrogant, but I'm not sure I've learned anything doing the movie that I hadn't already learned firsthand with my wife. As we've got three children, that's 27 months of my life I've experienced pregnancy and labor. I think as a guy, you instinctively feel the need to protect your wife more during pregnancy, and I think it brings a couple closer together. These sound like really obvious things to say, but the intimacy you experience is so much more intense—it's something that I remember very clearly.

And the process of making a movie is so long, it's almost like giving birth to something yourself.

Yeah, it is—most films are about a year for me.

You cast several actresses who've had a lot of tabloid attention paid to their wombs. How did you decide who should play who, especially given their public personas about motherhood?

I didn't really pay too much attention to what had been written about their own pregnancies and relationships. I looked at the character of Jules Baxter and thought it needed to be someone who's really fit and strong, and I thought of Cameron Diaz. Fitness is very important to her. I thought Jennifer Lopez would be interested in her role as a woman who adopts because it's so different from her own life experiences. She's been fortunate enough to be able to have children, and when I first spoke to her, she said she'd never thought about what it would be like to not be able to have children and have to go through the adoption process. I think she really enjoyed finding out more about that. Elizabeth Banks was because I considered Wendy to be the strongest character in the movie, especially because her pregnancy was such a nightmare, and I knew Elizabeth could handle that comedically.

I thought it was brave you included miscarriage in the film.

I was keen to do that. I saw an original draft of the script, and as far as I can remember, miscarriage wasn't featured in it. One of my notes was that I thought it should be featured because that is a part of pregnancy, and it's one I've experienced. So many people I know have experienced it, and it's one of those things no one talks about, but as soon as it happens to you, you talk to other people and find out it's happened to them, their friends—it's very common. I felt we needed to tell the whole story of pregnancy, not just the funny bits. It was an important thing to me.

Tags: Kirk Jones, What to Expect When You're Expecting
Print