What to Expect When You're Expecting Something Sinister 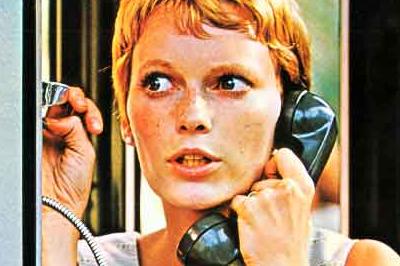 For all its millions of copies sold and mommies and daddies helped, What to Expect When You're Expecting avoids questions some extraordinarily unlucky new parents need answered. Worse things can happen to expectant parents than running out of prenatal vitamins or having to skip Lamaze class. Aw, gee—the toy store is all sold out of that hypoallergenic giraffe chew toy? At least you're not, say, giving birth to a child who will later be abducted by your murderous professional assassin baby daddy after he tries to have you killed. Here are four films which offer nuggets of pregnancy wisdom that the classic manual missed.

What to Expect When You're Expecting a Demon Child, According to Rosemary's Baby

Pregnancy is a literal hell for Rosemary (Mia Farrow) when she finds out that her shifty, failed actor husband has secretly made a deal with a Satanic cult in exchange for a movie career. Her unborn child is the Anti-Christ, which adds even more trauma to this inexperienced mom on the eve of her first baby.

Every mother can tell you that your body goes through some rather profound changes during pregnancy. But Rosemary learns that in addition to the body adapting to provide food for the newborn, it also does double duty as a place of worship for any group willing to take the time to register. It's true!

The deal her husband made offered up her womb as a vessel for the spawn of Mephistopheles. And that's not illegal—it's protected under the First Amendment, which guarantees religious freedom. Sure, Rosemary might have the unfortunate distinction of being the mom of Satan, but she's also a brave pioneer in expanding first Amendment freedoms.

The Lesson: Women's wombs aren't just sacred, they're sanctified. Every expectant mother should prepare to be approached by local spiritual leaders and carefully consider what kind of constitutionally protected house of worship their body will become. Sure, that's a lot of people in the delivery room, but think of the financial benefits: college is a whole lot easier to save for when you're not just a mommy, you're tax-exempt.

What to Expect When You're Expecting Extraterrestrial Warfare, According to Aliens

James Cameron's first film about parenting was The Terminator. We all cried at that universally applicable story of how when a mommy and a daddy love each other, the daddy will travel back in time and give mommy a special hug, then get killed by a robot. His second outing, Aliens, took Ridley Scott's tale of alien face-hugging parasite molestation and reimagined it as a tale of dueling parenting techniques.

Take Ellen Ripley (Sigorney Weaver). In Aliens, it's revealed that she's left a daughter behind on earth. Talk about free range children! A cryogenic nap robbed her of 52 years, making her daughter now a middle aged woman. Then Ripley gets a second chance at motherhood when she meets a little girl named Newt, the lone survivor of a human colony. In the middle of a horrifying alien onslaught, Ripley has to figure out what kind of mom she'll be.

Parenting the Colonial Marines way means giving Newt a gun and tell her to mow down aliens for her allowance. But Ripley turned to a surprising new role model: The Alien Queen. The Alien Queen might have been a horrendous avatar of destruction, but she was also the most devoted of helicopter parent, living literally in the middle of all her eggs as she nurtured her babies and taught them the ins and outs of murdering humans. Ripley followed that example, not only keeping Newt as close as possible, but also realizing the only way to defeat the Alien Queen was by killing all her hatchlings.

The lesson: Every parent has to decide their own parenting style for themselves. Also, emulate your rivals, and kill them.

What to Expect When You're Expecting to Murder Your Baby Mama, According to Kill Bill Vol. 1 and 2.

Quentin Tarantino's Kill Bill films put parenthood at the center of the story. The Bride (Uma Thurman) is a former member of a highly skilled team of assassins. But when she found herself preggo by her boss, the Bill of the title, she realized that a life of constant killing isn't the best environment for an impressionable baby. Of course, she forgot to tell her former employer, who comes looking to gun her down for skipping her exit interview. Oops.

If we've learned anything from movies about expectant parents, it's that mommies are always, "ZOMG BABIES CUTE!" while daddies are, "NOOO! NOW MY PRECIOUS MAN PARTS WILL NO LONGER BE ABLE TO PLAY VIDEO GAMES AND MAKE OUT WITH MODELS!!111!!" I've met plenty of happy dads, so what's with Hollywood's negativity?

Fortunately, there's Bill. Sure, he's so devoid of compassion that he ordered a hit on the mother of his child. But when he kidnapped his infant daughter, he revealed himself as a real daddy. For five years, he lavished affection and riches on his child and never once spoke ill of the mommy he wanted to assassinate. And when justice—make that, a pissed-off Uma Thurman—finally arrived? Bill did the responsible daddy thing and made sure the final battle happened after his little darling's bed time.

The lesson: Fathers can be good parents, too. And when you fight, do it out of earshot of the kids.

What to Expect When You're Expecting to Drown Giving Birth, According to Apocalypto

It's hard enough being an expectant parent in our modern world of balancing work, family and coffee breaks. But imagine being an expectant parent on the eve of the Spanish Conquest of Central America. In Mel Gibson's surprisingly not-very-racist thriller Apocalypto, a small-fry Mayan warrior Jaguar Paw is kidnapped from his village to become a human sacrifice. The film focuses on his quest to escape captivity and make it home to his pregnant wife Seven, whose baby bump is like 9.5 months along.

The hallmark of pregnancy movies is the big screaming birth scene where the mom is like, "No pain medicine for me, thanks," and then minutes later is all, "Give me the shot or I'll rip your face off!" Apocalypto raises the stakes. While Jaguar Paw is evading bloodthirsty Mayans, Seven is hiding out in an flooding underground cave during a rainstorm. Just after the water breaks past her ability to stay above it, so does hers—she goes into labor.

This is where things get magical. Seven manages a feat that 30 years of natural birth training hasn't yet given American moms: she wills herself to give birth. No, really. As the rising water brings her just inches from drowning, Seven puts on a determined grimace and concentrates really, really, really hard, at which point the new baby pops out like it wasn't even a thang. Now that's girl power.

The lesson: Pregnant women have super powers when exposed to water. To ease the pain of labor, forget natural childbirth or even drugs—build all maternity wards in exposed underground lairs and make them mandatory during hurricane season.