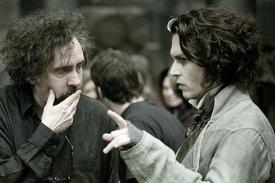 Director Tim Burton and megastar Johnny Depp's collaborations will go down in Hollywood history as a reliably bankable—if not always creatively fruitful—partnership. Their latest film, Dark Shadows, a redo of the 1960s vampire soap, is their eighth collaboration in 22 years—and one that indulges the duo's worst tendencies.

At first, Burton and Depp's partnership was a charmed meeting of kindred souls. Burton's first personal film, Edward Scissorhands, was also his first collaboration with Depp. The director found a lifelong muse, and Depp eagerly shed his teen heartthrob image by playing the sensitive, naïve Edward with heartbreaking delicacy.

In the last decade, however, many of their projects are caricatures of their earlier work. Burton's choice in scripts favors nostalgia over storytelling while Depp plays the noble kook with escalating affectation. Outfitted in increasingly bizarre costumes, his major dramatic struggle is simply to stand out from the lavish production design. Does the 48-year-old actor—still gorgeous but certainly aging—purposefully seek roles that allow him to hide behind circus wigs and clown make-up? Let's revisit the highs and lows of Burton and Depp's insular partnership and rank their movies by collaboration, character development and quality:

Edward Scissorhands
Depp and Burton's first picture remains their most enduring. More human than the petty, pastel suburbanites he wants as neighbors, Edward Scissorhands is a man-made man in need of a family. Depp perfectly captures Edward's mix of otherworldliness and childlike sweetness, and makes the most of his make-up (and those scissors!) with strange and funny poses. And Burton and Depp needed each other. Edward Scissorhands would be a very different—much worse—film if Burton had caved and gone with the studios' first choice: Tom Cruise.

Ed Wood
Burton's sweet biopic of schlock director Ed Wood is his most character-driven movie, and in it, Depp gives one of the best performances of his career. (No small feat.) Ed Wood is an ambitious, optimistic crackpot who thinks he's making Citizen Kane when he's really making, well, the worst movies ever made. Depp gives Wood a faint lisp ("I lost my pearlies in the war") and a hypnotic sexual allure in spite of—or because of—his penchant for dressing up like Faye Dunaway in Bonnie and Clyde. Burton's admiration for his subject and Depp's playful performance create a creature as strange as any from Ed Wood's films—but one that feels familiarly, gloriously human.

Sleepy Hollow
After Ed Wood, the priggish, ‘fraidy-cat amateur detective Ichabod Crane is the funniest Burton character Depp has ever tackled. Crane investigates a string of mysterious beheadings, passionately insisting on "detecting" with the latest scientific methods. Depp embodies Crane as an insecure newbie hiding behind Monty Python-esque bravado, while Burton succeeds in making Crane both the film's debonair hero and its bumbling clown—a tricky balancing act he also achieved in Ed Wood, and never again.

Sweeney Todd: The Demon Barber of Fleet Street
Ridiculous hair is the only thing that gentle weirdo Edward Scissorhands and misanthropic barber/serial killer Sweeney Todd have in common. Todd patiently waits to wreak vengeance against the corrupt judge who framed him and raped his wife. When he isn't singing about being dead inside, Todd stares out of a window, all cheekbones and rage. As all that staring suggests, Todd is an underwritten character. But Depp does as much as anyone could probably do with the role, and sings (rather well) to boot. For his efforts, he earned his third—and only Burton-assisted—Oscar nomination.

Corpse Bride
This stunning stop-motion animated film casts Johnny Depp as the voice of Victor Van Dort, a timid, gawky Victorian who stumbles into marriage with a beautiful murdered girl. Victor isn't an especially interesting character, so Depp has nothing more to do than stammer and stutter in his lullaby voice. But Burton made full use of his collaboration with Depp by modeling Victor after him: the puppet shares Depp's floppy hair, hand movements and expressive eyebrows.

Alice in Wonderland
Burton's revisionist Alice imagines Lewis Carroll's meandering tale as a dragon-slaying quest and leads Depp down the director's rabbit hole. The Mad Hatter is another one of Burton's noble kooks, an insane, impotent would-be revolutionary fighting against Wonderland's Marie Antoinette. Depp's silent-movie acting and glow-in-the-dark Chucky eyes succeed in supplanting all other Mad Hatters, but the role feels fundamentally miscast—Joel Grey would have been much more convincing as an eye-batting, hat-loving eccentric than the ultra-hunky Depp. For a director so fastidious about his visuals, Burton can be disappointingly dull in his casting, to the detriment of his films.

Dark Shadows
Even for a remake of a soap opera, Dark Shadows is overstuffed with plots that go nowhere. All the characters are broadly sketched or ill defined—none more than Depp's Barnabus Collins, an 18th-century vampire and goofy paterfamilias who comes to live with his descendants during the Groovy Seventies. Juggling at least ten storylines, Depp is committed to every scene, but never has the chance to actually create a cohesive character. Worst of all, Burton has the 48-year-old actor chasing after 24-year-old Bella Heathcote, yet another doll-eyed ingénue half his age.

Charlie and the Chocolate Factory
It's not hard to put Charlie last. It's harder to tell whether to blame the actor or director for this disaster? The film is marred by Depp's Willy Wonka, a creepy collection of artificial mannerisms channeled from a bad Michael Jackson jokebook. Earlier this week, Depp said his inspiration for Willy Wonka was imagining "what George Bush would be like incredibly stoned," a curiousity that suggests Depp was incredibly stoned at the time. To add insult to injury, Burton gives Wonka a tedious, simpering back story that somehow dehumanizes him all the more. Let's hope the pair does better on the rumored Beetlejuice sequel.