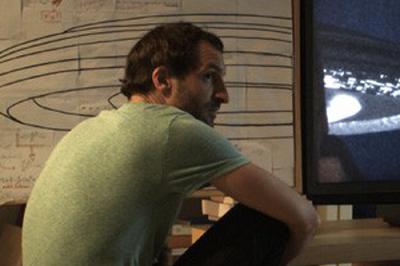 Post-one night stand, Julio and Julia are already having an awkward day. They've slept through the entire morning and can't even remember each other's names. But it gets worse when Julio tries to leave and finds the streets evacuated and a giant space ship hovering over the city. Alone in this alien apocalypse, they band together. Only they aren't alone for long—here comes Julia's stalker neighbor and also the boyfriend she forgot to mention the night of their drunken hook-up. When you're the last people in Madrid, you've got to band together—even when the social web is this sticky. With Extraterrestrial, Academy Award-nominated Nacho Vigalondo, director of the tricky thriller Timecrimes, wanted to make a movie about what would really happen if a spaceship landed on earth. Hint: no one would step up to play hero...especially not Julio, who's most interested in keeping the creep next door from telling Julia's boyfriend all about the loud, sexy noises he heard the night before the UFO invasion. Vigalondo explains why he made an alien movie where the real enemy is other people.

Why make a UFO movie that isn't really interested in the UFOs?

We like to think that most people are heroes when they're called upon to be one. Do you think that's true?

In an alien invasion situation like this, heroes will be only the 1%. The rest will be us: non-useful people. It's like in Spain now, we are having this big economic crisis. Most of the people just complain on Twitter—at the end of the day, most people are not useful to coordinate anything against the situation. I wanted to explore the feeling that when bad things happen, we are just waiting. And then, that the social rules vanish. Maybe then, these characters find a way to use the situation to their advantage. I think this is the only movie where an alien invasion is an advantage to the character.

And the aliens don't ever even have to do anything. They just show up and we panic and destroy society ourselves.

How would you yourself react if you woke up to an alien invasion? Could you be a hero?

To tell a story like this, it's because I suspect that I am one of those un-useful people.

We never see the aliens in the film, but did you decide what they looked like?

No, but I did decide on a sequel I had in mind. It will take part four years after the events in this movie and nothing has happened. People come back to the city and they get used to the UFO's presence, so the government uses helicopters to let people go on the UFOs and bars to keep people from falling down. And little telescopes so you can put in a coin and see the city from that height because the view is amazing. It becomes a tourist resort. I think that is not surrealism because if you check the alien activities through the last century, you realize that everything aliens have done to us is messing with our heads. They appear, they disappear, they make circles in the crops, they abduct rednecks and cows—the history of UFOs is a history of pure nonsense. Pure bulls--t. So this movie is actually the most realistic take on this phenomena.

Wait—so you really believe aliens have come to earth just to mess with our heads?

Yeah, yeah! You can check that. Go to the internet and check the UFO sightings. You will notice that they appear in the distance and stay there for five seconds and disappear. Why the f--k do they travel through the universe just to appear for a bit of time? It's a big cosmic, poetic performance.

I've heard you love karaoke. If you could sing a song that captured the feeling of watching Extraterrestrial, what would it be?

You know what? I wrote—but didn't film—a sequence where Julia and Julio first meet each other, and that happened in a karaoke bar. You read my mind. They were singing together—you can make it believable that a couple who just met and likes each other, before they have a real conversation or know each other's names, they're together on a stage. You can be totally drunk on a stage with someone singing karaoke and you can feel the connection. One idea for the song was "Sweet Child O' Mine" by Guns n' Roses.

It is a sexy song.