A Field Guide To Being A Movie Archaeologist 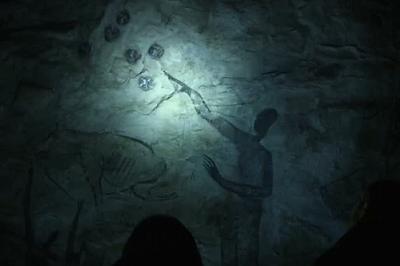 Archeology is a growth industry. The thing about the past is there's more of it every day. The Alien prequel Prometheus digs into a whole new world when archaeologists on the Isle of Skye unearth a map that directs them to an ancient alien culture on a distant planet. Sounds far out, but that's actually an average day in the dirt for movie archaeologists. Looking to get into this exciting profession on the below-ground floor? Here are some tips from the pros*:

DO be superficial. Real archaeologists are more interested in rooting through ancient garbage to learn about regular folks (as if that were interesting) than the millennial battle between good and evil. Movie archaeologists, on the other hand, place themselves on the front lines of that war, usually as incompetent—if not self-immolating—soldiers. Such is the case of Father Lankester Merrin (Max von Sydow) in The Exorcist, who uncovers a hideous artifact that releases a demon with a keen distaste for pea soup. Merrin later loses his life to during its exorcism-too bad he didn't simply rebury the damned thing when he saw it was too ugly to sell to a collector.

DO have a trust fund. This is, of course, a good rule of thumb for individuals in any profession, but one that will prove especially helpful for the archaically inclined. After all, last-minute international flights and years of language lessons in extinct tongues tend to be prohibitively expensive for the average dirt-lover. Thus, follow the example of Lara Croft (Angelina Jolie) in Tomb Raider and simply be a millionaire heiress who sniffs at other people's attempts to actually make money with their careers. Besides, being a jet-skiing badass is already a full-time job.

DO become a crazy conspiracy theorist. Once upon a time (the '80s), movie archeology was about being an expert in a certain field, holding court at an institution of higher learning, and looking crazy-hot once the glasses came off. But these days, it's all about connecting the dots in a way no one else would outside a sanitarium—or Glenn Beck's show. In the alternate universe of National Treasure, Benjamin Franklin Gates (Nicolas Cage) takes logical leaps broader than the Grand Canyon by connecting every single place and person you might remember from middle school social studies in a way that somehow leads him to vast treasures instead of the funny farm. When you live in Movie Archeology Land, the thing about crazy conspiracy theories is that they're all true.

DON'T forget to stretch. "Seventy percent of all archeology is done in the library," drones Indiana Jones (Harrison Ford), the Flakiest Professor of All Time. Au contraire, Dr. Jones. In the four-film series that bears his name, Indy is constantly sprinting through wild jungles, savage mines and booby-trapped ruins while fleeing Nazis, snakes, and giant balls of doom. Even at the library, he's smashing through the floor to break into the secret catacombs beneath. All that running and crashing has got to be killer on the quads and lats, which means he must undo that muscle stress with a power-stretching regimen. (An idea for a fifth-parter: Indiana Jones and the Benefits of Yoga?)

DON'T fall in love. The romance of archeology has always been overstated. Professional archaeologists actually make for terrible life partners: they work long hours, their jobs are unstable, and there's always sand embedded somewhere in their bodies. Thus, movie archaeologists are best-suited for a life with someone they meet on the job. Take Tom Baxter (Jeff Daniels) in The Purple Rose of Cairo, the ultimate movie archaeologist. Tom is a character in a movie until he escapes the big screen to meet and fall in love with film buff Cecilia (Mia Farrow). Yet, Cecilia rejects him for who he is-a dashing movie archaeologist always ready for adventure. Tom should've taken a page from his colleague Indiana Jones and simply found a different lady on each of his exploits.

DON'T touch that! The one thing that movie and real-life archaeologists can agree on is that recently excavated artifacts should be carefully researched before they're used or even touched. Real archaeologists will tell you it's because ancient things are extremely fragile and a single touch can turn priceless knowledge into dust. In the movies, the risks are more, well, awesome. The Mummy's amateur tomb-plunderer Evie Carnahan (Rachel Weisz) learns that lesson the hard way when she unwittingly speaks the words that reanimates the mummy that she and Rick O'Connell (Brendan Fraser) spend the next two hours running away from. If the ancient object seems too easy or convenient—the book's right there, the lever is just within reach—it's probably filled with evil magic. Don't go near it. But if your curiosity overwhelms you, at least give the job to a minion.

*Disclaimer: This list can only cover the basics. Movie archaeologists spend many years having dramatic backstories and cultivating perma-stubble before they are qualified to brave the field. We at Boxoffice cannot guarantee immunity from ancient curses or the homicidal undead.