A History Of Terrible Movie Raps 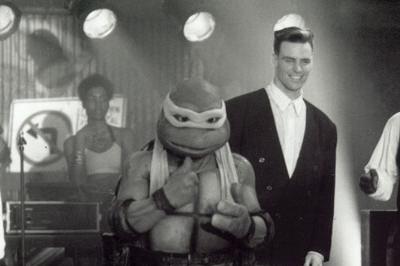 Rap isn't just a skill, it's a science. And to prove it, Ice-T's made his directorial debut with the documentary The Art of Rap, to teach us the science behind dropping science. But a movie about hip hop draws attention to the hilariously awful historic relationship between film and rap. As Tribe Called Quest's Phife Dawg put it, "Just because you rhyme for a couple of weeks/Doesn't mean that you've reached the MC's peak." Word to your mother. See, while plenty of composers can mock up passably generic rock music or convincing jazz, when they try to write a hip hop soundtrack, I say "Hell no." Then again, my opinions don't stop a lot of terribly unqualified people from trying—and failing—to capture rap lightning in a movie bottle. So as we get ready to be schooled on how to rap right, let's see who rapped wrong. Including... the director of The Art of Rap himself.

Rappers who live by the mic, die by the mic—even if you're the director of The Art Of Rap. See, years before Ice-T filmed how great raps are born, even before he helped create gangsta rap with his rhymes about true crime in Los Angeles, he was a just another young MC trying to break into the game by any means necessary. And being based in LA, those means included hilarious appearances in z-grade cash-in flicks about the totally radical '80s art of breakdancing.

In Breakin', Ice was cast as the nightly house MC at a MacArthur Park-based breakdancing spot where he spits verse for the amusement of rival breakdance crews. Far from the laid back pimp persona he would perfect on albums like Power and Rhyme Pays, the Ice-T of 1984 clearly hadn't quite figured out his style. Or, frankly, even how to rap at all.

"Move your body/to the beat/that will make you feel complete." Yowza. No doubt Ice would rather forget this embarrassing record of his artistic development. Alas, some mistakes have to be made twice. Which is why Ice returned for the sequel, Breakin' 2: Electric Boogaloo.

In Breakin' 2, Ice has decided that S&M is the future of the rap game. Remember that picture of your dad with a really bushy mustache? This is like that cranked up to one million. It's probably a miracle that Ice managed to even get Rhyme Pays, his debut album, released because his early film work is its own rebuttal.

Yeah, we get it: Rick Ross wasn't kidding about the importance of hustlin' every day, but seeing the Iceberg drop some of the worst science ever conceived is a lot like discovering there is filmic evidence of Jello Biafra performing Grateful Dead covers. Fortunately, the Ice owns his mistakes-he's on record that he considers his performance in Breakin' to be completely wack.

Mario Van Peebles helped define an entire genre of hip hop called New Jack Swing and launched the careers of Chris Rock and Ice-T the actor with 1991's New Jack City. It's awesome in how it manages to capture the cultural zeitgeist in those last cheerful seconds before grunge and gangsta rap. I chose to see New Jack City as Mario Van Peebles' apology for his appearance in Joel Silberg's tremendously terrible ode to the still-nascent rap music form: 1985's Rappin'.

Rappin' stars Van Peebles as "Rappin' John Hood," a former petty criminal-turned community activist trying to clean up his hood with the power of rap. "This is rap," says John Hood. "It's what we feel and the way we say it when it's real". Yeah, real. Real awful, that is. What follows is nothing short of astonishing as Van Peebles and a very young Eriq La Salle of ER deliver the wackest rhymes in the history of rap while dressed as extras from The Road Warrior.

"I've told you once/now I'm telling you twice/don't push for a third/because I'm not that nice." Yeah, okay Eriq. Sure, Silberg meant well, but he clearly had zero understanding of rap music. For instance, it's never appropriate to drop science in the middle of a city council meeting, no matter how fresh your game. What makes it even better? Allegedly, the film's dubious rhymes were written by none other than Ice-T. Clearly, Ice needed to make a mistake three times.

See, the rhymes in Breakin' and Rappin' were at least written by someone who actually came up in the game. They were terrible, yes, but they were authentically terrible. By the late '80s when it became was apparent that this rap stuff was more than a fad, suddenly old white people in Hollywood were itching to capitalize on it. Behold: white people with no business going anywhere near a mic busting rhymes. Like "City of Crime," the rap featured in the closing credits of 1987's Dragnet.

There's just so much wrong with this, starting with the fact that Dan Akroyd is a better rapper than Tom Hanks. "I'm here tonight to rap about your rights?" If only those rights included the right to have your interrogating police officer remain silent. On the other hand, we now understand one of the more vexing mysteries of the modern age: How a two-time Oscar winner like Tom Hanks could have produced a son like wannabe rapper Chet Haze.

The Michael Terry Rappers and Amanda Ingber, "Top That!" from Teen Witch (1989)

If Tom Hanks and Dan Akroyd are the Rogers and Hammerstein of terrible rapping, meet the Stephen Sondheim. Forget the early sins of Ice T and Mario Van Peebles—they were Grandmaster Flash compared to Teen Witch, which boasted worse production values than a made-for-TV film and a cast that almost seems as embarrassed to be in the movie as the rest of us were to have watched it.

But the film's worst (or best) moment comes when the titular witch and her BFF go on a bike ride and come across some local guys on a street corner who spend all their time rapping. After Teen Witch's best friend-clearly driven insane by sexual frustration—laments that she could never hook up with one of these guys, Teen Witch casts a spell that causes the single worst rap ever made.

"Look how funky he is!" Yes, a screenwriter was actually paid to put those words in an actor's mouth. But it gets even better. "I will never be hip" laments Teen Witch's bestie. Nope.

At last, the moment when Hollywood stopped trying to ruin hip hop. If you were alive in 1991, the only thing you remember about TMNT 2 is the rap "Go Ninja! Go Ninja! Go!' And for good reason: it's the moment that the chill left Vanilla Ice's career.

By May of 1991, Vanilla Ice had just enjoyed one of the greatest debut years of any artist before Adele. In 1990, his song "Ice Ice Baby" exploded out of the void into a gigantic monster hit that immediately made him one of the most famous musicians in America. His album To The Extreme spent 16 weeks at number one. He toured with then-megastar MC Hammer, hooked up with Madonna, and made millions. So he tried to conquer film, first playing himself in the second Teenage Mutant Ninja Turtles film where he 'improvises' the "Go Ninja!" song in order to calm down a club.

Unfortunately, Vanilla Ice's own egomaniacal weaknessess made him an easy target for the emerging backlash against prefab pop music. By the time Secret of the Ooze came out in May, 1991, "Smells Like Teen Spirit" was just four months from dominating America. Instead of establishing Vanilla as a double threat, "Ninja Rap" became the symbol of his decline. And for good reason.

"Have you ever seen a turtle get down/slamming and jamming to the new swing sound!" That is the sound of a career dying. Fortunately, Vanilla's career suicide served a good purpose. It forever discredited the notion of horrible rapping in film, with the random exception of Betty White spitting rhymes. While we can't love Vanilla Ice's music, we can thank him for that service. And in his own words, "Out with the gladiator, baby."