'Abe Lincoln' Director Timur Bekmambetov: Russian Leaders Would Have Fought on the Vampires' Side 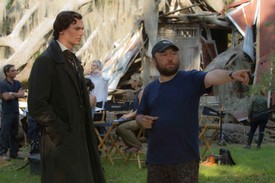 In Russia, Timur Bekmambetov is a bigger giant than Peter Jackson. Literally—his second film, the thriller Night Watch, made more rubles than The Fellowship of the Ring. When Hollywood invited him stateside, he concocted Angelina Jolie's bizarro bullet-bending action flick Wanted, and now he's back with Abraham Lincoln: Vampire Hunter, the weirdest take on the Civil War since Will Ferrell played Honest Abe himself. Explains Bekmambetov, he had to come to America to make this movie—Russian leaders would be fighting for Team Vampire.

Why does it take a Russian to reinvent an American hero?

It's fate. We're very similar, Russians and Americans. We are huge multinational empires, countries with a very intense and traumatic history. Not so many Americans know that the Russian Tsar Alexander the Second freed slaves in 1861, almost the same year.

If you were going to make a parallel film with a Russian historical figure, would you choose him to star?

I have thought about it, but I couldn't find a Russian Abraham Lincoln, because Alexander the Second was a tsar—he wasn't an ordinary man who became a president. It's a different story. But I think Lincoln was a figure who changed the world, not just America.

And today more than ever, Hollywood makes movies for the world, not just America. How do you make a movie about Abraham Lincoln important to everyone?

It's a superhero story, just a superhero story with a historical figure. And like any superhero story, he has an ordinary life, he's a young boy who doesn't know how to live, he's lost his parents, he wants revenge, he finds a mentor—it's like The Dark Knight. And he has the same moral choice to save the world, save the girl. The only difference is that suddenly in the middle of the movie, he understands that the axe is not the best weapon. It's not enough. You cannot kill every vampire. He's a superhero who knows that you have to fight with the people for the people. And then it becomes a political movie suddenly.

And you have Anthony Mackie playing his good friend. How much does their relationship reflect the racial tensions of the Civil War?

It's very delicate. For me as a foreigner, I think it's more visible because what I see is the trauma still exists. But I feel that the story we're telling is kind of healing this pain because when it becomes part of the entertainment world, it breaks barriers and becomes myth. It's not real anymore—it's a more poetical way to talk about this very dramatic moment of American history.

This is your first action film set in the past. The contrast between explosions and crazy fight scenes with this genteel setting is startling.

Yes. It's a chain of attractions. Ben Walker spent three months every day training how to fix with an axe because he's juggling and doing these unbelievable things. With friends from Russia, we developed this whole technique of how do you use an axe because an axe is a very unique weapon. You cannot move it spontaneously—you need to keep it moving. It's like a sword. He lost, I don't know, 30, 40 pounds.

He was on a diet, too, and magic was happening. He transformed from a very successful Broadway actor, tough and fed well, to this skinny, elegant intellectual bad ass death machine.

Are there any world leaders who you wouldn't be surprised to learn are vampire killers?

Ronald Reagan. He has his ambitions. In Russian history, I couldn't find.

No? We always think of Russian leaders as being so tough.

They were tough—but sometimes they were too tough and they were fighting on the vampires' side! I'm sure there were vampire hunters in the Renaissance, in Italy maybe.

DaVinci? He could do everything.