'Abe Lincoln: Vampire Hunter' Star Anthony Mackie: "Julliard is the perfect place to learn how to do a movie like this" 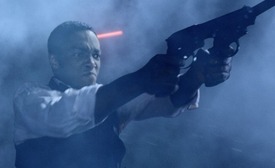 The first time you saw Anthony Mackie says a lot about your movie habits. Was him as a soldier in the Oscar-winner The Hurt Locker? His turn as a robot hustler in Real Steel? As Tupac Shakur in Notorious, as an agent of destiny in The Adjustment Bureau, or will it be here in Abraham Lincoln: Vampire Hunter where Mackie plays the real-life White House worker William Johnson, best known as the man who cut Lincoln's hair and nursed him through smallpox. No one knows exactly where Johnson is buried, just like no one can predict what genre Mackie will try next (though in the next year, you can catch him as a retro detective in Gangster Squad and a Miami bodybuilder in Pain & Gain). We ask him what the actual William Johnson would think to find himself killing vampires 150 years after his death—and what evil monsters he thinks might be behind other American revolutions.

You and Ben Walker, who plays Abe, both went to Julliard. I love the idea of two Julliard-trained actors starring in a movie called Abraham Lincoln: Vampire Hunter.

I think Julliard is the perfect place for two actors to learn how to do a movie like this. The one thing they teach you that I feel a lot of schools and training programs don't is that being an actor isn't so much what you bring to the screen—being an actor is how prepared you are before you get to the screen. Julliard really focuses on teaching you how to do your homework.

Speaking of homework, your character William Johnson was a real person, but most historians describe him more like Lincoln's employee than his trusted adviser.

I wonder what William Johnson would think if he could flash-forward to today and a) discover movies, and b) find out he's a character?

I think he would s--t a brick. It's funny when you think about it. I was thinking yesterday, "If I wake up 200 years from now and someone's making a movie about me and I'm a badass slaying vampires for the good of mankind, I would be pretty happy about that."

You've got a lot of life left in front of you-there's still time for that to actually happen so that movie could be a biopic.

It could happen. I could also do one of those Richard Pryor movies when I'm 50 and do Anthony Mackie: Vampire Hunter. And play myself.

Charlie Kaufman could write that for you.

So has anybody said to you that they're worried a movie that half-blames slavery on vampires could be taken the wrong way?

Someone did and I was like: You know what? In every facet of our lives, we try to figure out a way to explain inhumane gestures by great numbers of people. It's happened with the slave trade, it's happened with the Holocaust, and it's happened with the Crusades. The main focal point of this movie is inhumanity-inhumane treatment of other people. And how could you stand by and let another human being be treated that way and just turn your head from it? What's so interesting about this movie is it gives you a different answer to that question. I've asked that question many times. "How could that happen?! How could someone let tens of millions of people be shipped to another country and no one say, 'Wait! This is wrong!'"

I'm going to name a couple terrible events from American history and ask you if you think there was another secret evil force that was responsible.

Why weren't women allowed to vote until a century ago?

Wowsers. You women and your crazy questions! I'd like to blame everything on Ronald Reagan, so I'll say him.

Wait—Ronald Reagan with a time machine?

Okay, okay. Husbands. Husbands are mean, awful people and they realized if their wives voted, they could come up with laws and rules to stop you from drinking and playing poker.

Except for all those women who like to drink and play poker.

Of course, if they're 18, they technically have to say, "I play poker, but I can't drink for three more years."

Right. I'm sure you didn't take a drink until you were 21.

I grew up in San Antonio, where tequila flows like water.

You started drinking at 12. When you were a baby, they wiped tequila on your gums.

Okay, okay. Then what evil force is secretly behind the War on Drugs?

I'd say rich shipping moguls, because if they're not shipping any drugs, then they're not making any money. Know anybody who owns a shipping company?

Aren't they all Greek?

You said it—I didn't! There you go. Boom.

Then the War on Drugs must be winning because the Greek economy is collapsing.

Serious question: You're actually from New Orleans. What was it like here to be on a set that tries to recapture the old, swampy look of the city?

It was amazing. We actually went out in the swamp and we had an alligator wrangler who had to zap the alligators away from us. There's this street downtown in New Orleans called Julia Street and they put a new facade on all the buildings and dirt in the road. It looked like it was really the 1800s—it was remarkable. New Orleans is one of those cities where no matter what time period or place you want to see, you can find it in New Orleans. Except Antarctica.

Until the next ice age.

Someday there will be a movie, Barack Obama: Mastodon Rider.

That would be genius.

Your next movie is the bodybuilding flick Pain & Gain, which Michael Bay is directing for $20 million. What's it like watching him think small?

It was hilarious because every three or four days, he would go into a tailspin and throw a fit about how he hates low budget movies. It was great. You know, the thing about Michael Bay is though he gets a bad rap, he's really a remarkable visionary. He makes Miami look like Heaven—and he has a way of making people look beautiful. I hope with this, people see that he's also a great storyteller because he shot some really cool stuff and I think it's going to be a kick-ass funny movie.

I have to admire anyone with that much ambition.

I will take that as a compliment!