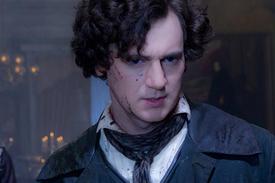 Before he was Lincoln, Ben Walker was the lead in the musical Bloody Bloody Andrew Jackson where as the controversial Trail of Tears president, he belted out lines like, "I'm Andrew F--king Jackson/and my life sucks in particular," or "And the war will go on and on and on/and on and on and on as long as we need!" So why not make his film debut as an axe-wielding, vengeful Abraham Lincoln who wants to slay the vampire who murdered his mother? And though he's uncertain about why directors find him presidential ("I'm tall and I'm cheap," he jokes), Walker does pack a powerful, deliberate calm—and a wickedly dry sense of humor. We ask him about the secret talents of other presidents and those pervasive rumors that Lincoln had a squeaky voice and wasn't that into Mary Todd, if you know what we mean.

So you've played President Andrew Jackson as a rock star on Broadway and Abraham Lincoln as a vampire killer in Hollywood. I'm going to name some other presidents and you tell me their secret talent.

Yeah, that's not a special skill—that's just what he did.

And French women are easy. It's like saying, Thomas Jefferson: Oxygen Breather.

Who's the president with all the illegitimate kids? Oh yeah—Grover Cleveland.

So if you could look at yourself objectively, what is it about you that people see as presidential?

And you have good hair.

I do have good hair. Knock on wood.

We have no video recordings of Abraham Lincoln and almost no pictures from when he was young, but do you think most people have an idea of how they expect him to look and sound?

I do, and we kind of came up against it during the making of this. For example, he's described in writings as having kind of a high-pitched, obnoxious voice, which I think was hard for the producers to rally behind. It's also difficult because I play Lincoln from when he was 19 to his death, so I had to allow his voice to age. There are some departures from what we know about him—obviously-but largely, we stick to a lot of his history in the movie.

I heard there was a chance Lincoln's squeaky voice might just be a nasty rumor.

Most of the people who wrote that actually weren't fans of Lincoln, anyway. So we don't know—and we chose not to listen to those assholes.

What about the gossip that Lincoln might have been gay?

Well, you could write an interesting high school paper on it. He did live with Joshua Speed [played here by Jimmi Simpson] for 15 years or so. But the thing about Lincoln is we have as Americans placed him on this pedestal. By worshiping him, we make him sacred and we rob him of his humanity—we rob him of what makes him truly heroic and complicated.

True. We picture him more as a marble carving than a real human.

Right, and when you do that, that's when politicians start taking his words and bending them for their own political agendas. Fictionalizing the man so that he fits into the box they want him to fit in, so they can use him. I mean, I think he'd get a big kick out of our movie and be really pissed at Congress.

People can't even agree on how he really felt about slavery, but here it's very definitive.

From what we know about Lincoln, there was a turning point in his life when he went down to New Orleans and saw slavery firsthand. His correspondence changed and his political views changed, largely because the climate of the country was changing. But in our movie, we've only got two hours to tell the story and we've got to fit vampires into it, so we streamlined some aspects of it.

Plus, you have to fit in this crazy fight scene surrounded by horses. Talk about shooting that.

That was wild. For the record: No horses were actually harmed in the process of making it.

So no horses were hurt when a vampire throws a horse at another horse?

No! Those were cartoon horses, it turns out. We shot half in an open field with some horses, then without. And then we ran onto a soundstage and they created these CGI horses made of foam that moved like horses, but were stationary.

Your skill at twirling an axe is excellent. Is it useful for anything else?

No, though I do use it around the kitchen every now and again. But it's still cool. Even though it's not going to come in handy in a bar fight or anything.

The twirling is pretty, but how does it actually help you kill vampires?

It's useful for momentum. It's actually really hard to cut somebody's head off with a blade—humans are meant to be all in one piece—so the axe spinning is simultaneously offensive and defensive, and also continues the momentum of the blade so you're not stopping and having to reset and wind-up for each chop. You're literally keeping the speed of the axe going. It ain't just pretty!