close
INTERVIEW: "I always thought we were going to be making independent films."

Alex Kurtzman: From Transformers and Star Trek to his truly personal drama People Like Us 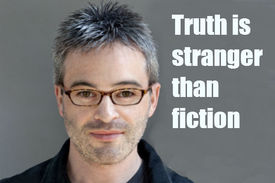 Alex Kurtzman's movies have sold over $2.8 billion in tickets around the globe, but he couldn't be happier about hitting pause on his blockbuster franchise career penning the scripts for Transformers, Mission: Impossible and Star Trek to shoot a $16 million drama that cost less to make than his past films have raked in on opening day. People Like Us stars Chris Pine as a charming but hot-tempered salesman who finds out in his father's will that dear old dad had an affair and left behind a secret half-sister, Elizabeth Banks. That's hard, but what's even harder is that while his father only left him his record collection, he left this strange woman $150,000 that Pine could really use. How can he give her the cash when he doesn't even have the courage to say who he really is, and how can he convince himself that this alcoholic single mom won't waste her shock inheritance—especially when he'd rather keep it himself. Explains Kurtzman, it's a story he had to tell: parts of it happened to him.

People Like Us is based on a true story. What is the true story and how did you find it?

I met my half-sister when I was 30. My dad had had another family before mine. He divorced, met my mom, had us, and we never grew up knowing our siblings. So when I walked into a party one day a woman tapped me on the shoulder and said, "I'm your sister." And eight years later People Like Us happened.

Has she seen the film?

Does she see herself in it? Do you?

There are things that are emotionally very auto-biographical in it, but a lot of it is fictionalized. She's nothing like Frankie, but she sees a lot of herself in the character. She was never a single mom, she was never an alcoholic, but I think that the experience was very personal for her and my half-brother, so, yeah. It was lovely. We watched the movie together, and the experience of this movie and meeting each other brought us much, much, much closer together.

Did you know at the time that you were going to have to figure out a way to write about it?

Yes, it was like an obsession. We didn't write it for money and we didn't write it for anybody but ourselves. The history of the creative experience is that there are so many writers and songwriters and filmmakers who've taken from their lives to create things. I haven't always had the opportunity to do that but I always wanted to, and that was the gift of this experience: getting to work through a lot of stuff. That was part of why I took eight years—it was a lot of separating truth from fiction and figuring out what in my experience to bring to it and what I needed to invent. It just took time, it wasn't something that I could see immediately. And I think that I had to wait for life to present me with these moments. It was about just sitting back and observing, and collecting details that I noticed, "Oh, well that should go in the script, this should go in the script." And Bob [Orci, his longtime writing partner] and I had the privilege of doing that for eight years without anyone breathing over our shoulders except ourselves.

I can't imagine how hard it would be to, say, edit out a scene that was inspired by and important to your own life, but didn't work for this story.

Well, that was why I took eight years. Because the answers were not immediately apparent to those questions. And I knew I wanted to fictionalize it—the story is in some ways far more dramatic than my actual life, but when you make a movie you have to take that into account. But certainly I felt that I was speaking and writing from experience. You know, what I felt the most in talking with my siblings is this incredible sense of lost time. Man, I wish we could've taken care of each other when we were kids. And I think that's really reflected in the last scene between Sam and Frankie. I think when he's sitting there and she's sitting on the step, he's really just as open-hearted as he's ever been in his life. The guy at the beginning of the movie is the exact opposite of who he ends up as. And really that's what he's saying to her, is "I wish we could've been there for each other and I don't want to lose that opportunity now. Even though I've made mistakes, please forgive me. Please accept me for who I am and forgive me." Elizabeth and I always talked about the idea that really, that scene is about Frankie finding her place. As angry as she is at everybody, she understands that if she doesn't forgive her father and brother, than she's not going to have a family ever. And by accepting them, she can move into a new phase of her life.

You co-wrote the script with your writing partner Roberto Orci. Did did you ever consider co-directing it?

You know, we didn't. Bob and I have, after 20 years of working together, such a great back-and-forth, and it's very much about our process together. But I think when you're dealing with a crew of people and a crew of actors, it's much harder to engage in that process with everybody else. And I think we always knew that—I don't think we ever had any real intention of directing together. Still, we both have the intention of directing and we'll always be working together. We write everything together, we produce things together, so at this point the line is blurry. But I think in terms of the voice that's communicated to people on the set, it's easier this way.

Is he the guy you call at midnight when you're nervous about the day tomorrow?

Do you guys take vacations together to relax?

We don't take vacations together. We'd like to take more vacations, period. I haven't had one in a little while, so I'd like one, actually. Wouldn't be terrible.

For people who know you from Star Trek and Transformers, this is kind of a left hook.

The truth is that Bob and I always thought we were going to be making independent films. We grew up in the heyday of independent film and we literally met out of our love for sex lies & videotape, which we saw when we were really little. We're both huge fans of Cameron Crowe and character-driven films, and then our lives went down a very different road. And we've tried with varying degrees of success to make the movies that we write personal. Even if it's a giant robot movie, like, you've gotta try and find something in there that you connect to. But I think we've been waiting for a long time to go back to the kind of storytelling that brought us together in the first place. And that doesn't mean we don't want to keep making the Star Treks of the world—we're writing Spider-Man 2 right now and having a blast—but I think we've been waiting for this for a long time. And we also knew that you can't really go out and make a character story unless you really have something to say. It's gotta be special, it's gotta stand out, it's gotta be different.

That no matter what, at the end of the day the most important thing in life is family. They're the people who are there when you're born and the people who are hopefully there when you die. Families are complicated, and even broken families can be mended. What Sam said in the movie when he's going through the rules of manhood: "Everything you think is important, isn't. Everything you think is unimportant, is." I think that sort of sums it up. He's this character who's been living a lie and spinning all these different plates and doing what he had to do get by, and focusing on all the wrong things, and the crash that he goes through comes when he realizes what really is important in life.

I have to admit: I'm an only child. Now, I feel like I'm missing out on something.

Yeah, but I think even though you're an only child, I do believe that everybody's part of a family, you know what I mean? And everyone has super-complicated relationships with their families, to their parents. And look: everyone's a daughter or a son or father or a mother and that's ultimately what the movie's about is that collective experience and being part of the family.

Did working on one idea for so long spill over into your other blockbuster movies that you were doing at the same time? Wrestling with something for years just makes you smarter in the way you write.

Yeah-you're exactly right. I like to look at a career as a continuum, and every movie—whether it succeeds or fails, whether it's good or bad—you really want to learn something from it. I've had the great, great privilege of watching so many incredible, talented directors, and with each experience, I've made a little mental note in my book about what I wanted to do and how I wanted to do it. By the time this came along, I felt ready to dive off the diving board. But it's a different thing when you're the director. Everyone always makes either captain analogies or military analogies and it's true: you're leading people on a charge. And you're doing it against the clock, and you're trying to find something truthful and the sun is going down. I felt like the only way to do it was to dive in completely.

The writer can always blame the director if a scene doesn't work. Now, it's all on you.

Exactly, but the flipside is that when a scene isn't working, I can call the writer, which is me, and figure out how to fix it.