Allen Abroad: Sure, Woody Can Shoot a Film in Rome—But What About North Korea? 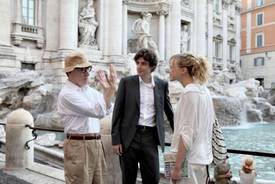 Since his trip to London for 2005's Match Point, Woody Allen has been on his own Grand European Tour from Barcelona to Paris to his latest flick, To Rome With Love. Yet despite this shift to more exotic climes, his films are still about upper-middle-class vaguely artistic types kvetching about their careers and unsuccessful love lives. Would Woody's schtick still work if he were forced to choose a bolder setting without a single tennis club, posh cafe, or romantic fountain? We head outside of the capitols of the West to see what Woody's films would be like in Ethiopia, Mongolia, Egypt, Tibet, North Korea, and Antarctica.

Who Moved My Cheese?: Woody in Mongolia
An inept artisan cheese-maker (Jackie Chan) is frustrated because his spoiled pet goat is refusing to produce milk. In the meantime, his neighbor (Chow Yun Fat), who keeps pretentiously quoting master cheese-makers, is producing superior cheese and stealing all of our hero's business—and possibly even his wife (Bai Ling). Our hero therefore hatches a plan to switch his competition's cheese with his own while his wife and the neighbor are having their trysts. Alas, his wife was cozying up to his neighbor only to poach his cheese recipe. She leaves her misguided hubby in disgust, and then his goat dies of an existential crisis. A comedy.

The Blue Orchid of Alexandria: Woody in Egypt
A group of affluent Americans go on a tour of Ancient Egypt with our protagonist (Jason Schwartzman) being the sole single among the couples. While his friends are busy bed-hopping and making quasi-racist comments about the locals, he falls in love with a local girl (Freida Pinto) who he believes to be a descendant of the ancient god Isis. At one point, he wanders off from the group and gets lost in a sandstorm, during which he shares a meaningful moment with a camel. The film would be peppered with factoids about the Egyptians, such as: "You know, it was common practice for Egyptian pharaohs to marry their siblings. It was part of what made King Tut so sickly."

It's Not Fair, I'm Cold: Woody in Antarctica
A neurotic writer (Daniel Stern) is told by his psychologist that he should take some time off, perhaps go on a tropical cruise. Since he's cheap, "cruise liner" becomes "commercial barge" and "tropical" to "Antarctic." When the ship springs a leak, the captain decides it would be cheaper to jettison the human cargo than the dry goods. So, Woody's character is forced to go live at an research facility near the South Pole despite having no scientific background where he falls for the head of the operation: a beautiful, irritable, and insecure lady scientist (Malin Ackerman). After a power outage, our two lovebirds are forced to stick together and keep warm by arguing over the relative merits of The Grand Illusion versus Rules of the Game.

What's So Funny About War?: Woody in North Korea
A nebbish thirtysomething (Korean pop star Rain) makes it big by doing stand-up about the failure of his marriage to a woman of his own age—younger is the only way to go. But his popularity catches the eye of the repressive government who pays him to promote the Supreme Leader in his act. Our comedian is rocketed to national stardom and international ridicule, but when the public begins to find him too intellectual and the supreme leader thinks he's acting like less of a sissy, he changes his act again—and accidentally triggers an uprising. His ex-wife, now North Korea's first female ambassador, is determined to become a higher trending hashtag on Twitter.

Through Thick and Thin Air: Woody in Tibet
In a last-ditch attempt to save their stalled marriage, an aging couple (Sigourney Weaver and Bill Murray) attempt to climb Mount Everest. The wife, who had pushed her reluctant husband into the expedition in the first place, is invigorated by the trip, and soon becomes attracted to their much-younger Sherpa guide (Jay Chou). But the egghead husband is entirely annoyed by the whole adventure, especially his wife's budding infidelity with a man who can hike 14 hours a day. When they come across a Tibetan monastery, the husband decides to stay both out of curiosity—"I value anyone's religion except my own," he quips—to ditch this exhausting three-person affair. After his wife and their guide reach the summit, she leaves her former husband to marry her new beau and embark on a worldwide publicity tour for her self-help book Climb Toward Bliss.