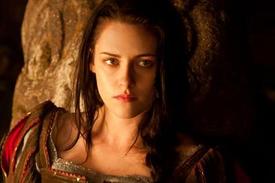 We've living in a golden age of girl action heroes. This week's Snow White and the Huntsman, in which the original Disney princess (Kristen Stewart) gets suited up like Joan of Arc, is the midpoint in a year defined by—if not dominated by—strong heroines. Snow White follows Black Widow's ass-kickery in The Avengers, March's The Hunger Games, the similarly themed Mirror Mirror, and Steven Soderbergh's Haywire, a showcase for MA brawler Gina Carano, and will be succeeded later this same month by the arrow-slinging Brave, featuring Pixar's first female lead (finally!), and Prometheus, the Alien prequel, which subs in the original girl with a dragon tattoo Noomi Rapace for Sigourney Weaver. Although women make up 52% of the world's population, we're still far from a reality where 52% of all awesome movies has a female lead. But while we should note this sign of progress for the hope it brings, let's take a closer look at the heroines we're being given. Are they really role models, or just a new spin on old cliches?

Pretty, Pretty Princesses
Examples: Snow White and the Huntsman, Mirror Mirror, Tangled
Description: When Snow White and Rapunzel trade scepters for swords, princesses get interesting and action heroines get makeovers. The two Snow Whites (Stewart and Lily Collins) team up with huntsmen and dwarfs to rally an insurgency against the reigning queen, while Rapunzel (voiced by Mandy Moore) escapes her evil stepmother's clutches with the help of a handsome thief. These modernized fairy tales abandon old tropes about female passivity and instead teach that survival depends on self-protection and strategic alliances with the masses. Unfortunately, the romance angle means that they're still usually being rescued (sigh), and the Snow White films tend to portray democracy, or at least popular royalty, as a nation-wide beauty contest.

Robots of Revenge
Examples: Hanna, The Girl with the Dragon Tattoo
Description: Hell hath no fury like a woman scorned, nor a girl scorched. Nine years apart in age, Hanna and Lisbeth are united in their need for vengeance—and the cold inscrutability of their stern, but pretty faces. Hanna (Saoirse Ronan) hunts down the CIA agent (Cate Blanchett) who killed her parents and made her inhumanly powerful by genetic experimentation—hey, thanks for that—while superhacker Lisbeth Salander (Rooney Mara) investigates murders and tortures the man who sexually abused her as a child. Although their causes are just, it's hard to sympathize with these Terminatorettes because they're so aloof and skillful they might as well come from Planet Perfectron. Plus, it's a little depressing that the righteous are painted as trauma patients in need of therapy.

Strippers With Guns
Examples: Sucker Punch, Planet Terror
Description: The machine-gunning Lolitas of Sucker Punch have a creeptastic love of lollipops and lingerie, but what's most perverse is how Sucker Punch dolls up its neo-exploitative misogyny as girl-power empowerment. When the film's pedo-bait hookers strip, they escape into a fantasy world where they slay dragons in tiny, flouncy outfits that would make Sailor Moon blush. Done right, Sucker Punch could have been daring for arming its girl ensemble with kick-assery and sexiness. Instead, it's merely one of the most hated films of all time. (Note to director Zack Snyder: Watch Robert Rodriguez's Planet Terror to see how a director can have his star be an amputee stripper with an AK-47 for a leg without utterly degrading her.)

Blue-Collar Gals
Examples: The Hunger Games, True Grit
Description: It's not muscles that make the hero—it's the heart. Family-minded Katniss (Jennifer Lawrence) and Mattie (Hailee Steinfeld) find strength in their lioness roles, both dutifully taking over their respective households after their fathers' deaths. With their inept mothers and dependent siblings, the two girls strive to do right by their loved ones: Katniss in the world's most dangerous game, Mattie in precarious Indian country with a bounty hunter for company. These two toughies grew up in hard times, and their icy stares and familiarity with weapons are testaments of their hardy survival skills. They're also the most worthy successors to the mother of all female action heroines: Alien's Ellen "Get away from her, you bitch!" Ripley.

Despite the irritation of having girl heroes who are either too wooden, too sexy, too princessy or too perfect, at least we're getting a variety of them—even if we are teaching a generation of girls that, like Rapunzel, they can grow out their hair to zipline across forests. But eventually, the suspension of disbelief and the idea of 90-pound Saoirse Ronan beating up three CIA suits will become ridiculous. We need the female versions of Bruce Willis, Jason Statham, Dwayne Johnson and Vin Diesel—well-rounded stars with charisma and a great left hook. Oh wait, we've got Angelina Jolie. Now we just need several other actresses to finally join her in the Temple of Va-voom and shoot The Expendablettes.