close
Remember his name when you're filling out your Oscar pool 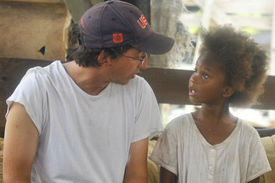 So a 29-year-old director finishes his first feature. It couldn't go any better than to have it win two Sundance awards, two Los Angeles Film Festival awards and a grand total of four awards in Cannes. For Benh Zeitlin and his curious, creative and passionate bayou drama Beasts of the Southern Wild, life is great. It's certainly a lot better than when he won his very first award at SXSW in 2008 for his short Glory at Sea—on the drive to collect his prize in Austin, he got into a car wreck and shattered a hip and dislocated his pelvis. Yes, things are looking up for Benh Zeitlin. And the way people are rhapsodizing about Beasts of the Southern Wild—a gritty fantasy about a 6-year-old girl named Hush Puppy who refuses to get swept away by a hurricane—he just might be on track for a Oscar nomination. With its combination of authentic natural tragedy (the film was literally shot amid the 2010 Gulf Oil Spill) and the larger-than-life entrance of a prehistoric monster who's hungry to face off against against our pint-size heroine, it has all the elements of a serious contender. Our suggestion for Benh Zeitlin's big night: rent a limo and fasten that seatbelt.

You're from Queens. New York is said to have the toughest people in America, but you've said that the people of Louisiana are stronger in their own way.

They're fearless, you know? I think Louisiana attracts fearlessness—and probably repels cowardice. I always feel like in other places, people raise children to be afraid of things: "We should worry about this, don't do this, this will hurt you, this will make you sick." There's a totally different mentality here of you gotta be strong. You have to be able to stand on your own two feet. If you fall out of the tree, pick yourself back up, shake it off—that kind of raising. And also, it just takes a certain kind of bravery to live that close to destruction. It's really a place that lives on the precipice of being wiped out any summer. It's midsummer right now, no one knows what's coming, and I think it takes a lot of bravery to stand on that ground and not run away.

Stubbornness too, yeah. Pride, stubbornness. It's a different type of strength.

You said that you made this film to try to find an answer to the question, "Why do people live in places where they're in peril?" Did you find an answer?

Yeah, I think so. I think what I also didn't know was how you go through, how you survive death. I think when you're when you're with someone or something that you care about—and all you care about its holding on to them—and you know that they're going to disappear, how do you stand by and not run away from that? How do you live through the death of that thing and maintain your spirit, and not be crushed by the tragedy? I think that that's something that I saw down there like with jazz funerals. New Orleans has this incredible relationship with death where they don't allow it to defeat them—it's always this defiant celebration that we're not going to be sad, we're not gonna be miserable. And I don't think I quite understood where that came from when I started making the film.

While you were filming in 2010, the big British Petroleum Gulf Spill happened and took over the news. I can't imagine shooting a film about the end of the world at a time and in a place where people felt like it was actually happening.

It's really weird. It really was scary. You're so busy that you don't really know what's happening as much as the rest of the world does, and then you start to hear, and it starts to creep towards you. Then you wake up every morning and see where the oil is and it's closer and closer to your town. And there was one day on set where we came in and there were ashen faces everywhere, and they had just announced that they were going to close fishing in this town for ten years, which essentially would be the end of the town. It would disappear—that's the economy there. And not even just the economy—there's lots of people there who are not part of the economy, they're literally just living off of the seafood and water. And that was the day we were shooting the scene about the fish dying, so it was all this kind of synergy that was happening. It definitely pushed the film. It was more surreal and more of a comedy when we wrote our original script, and the weight of actually making it down there and the things that were happening definitely pushed a weight into the film that I don't know that it would've had if we hadn't shot it on location.

You auditioned hundreds of kids for the lead role.

Thousands of kids. Did you know Quvenzhané Wallis was the one the minute you saw her?

Well, no. It was interesting. We had several teams around the state looking for people, and her first audition was really weird—she actually barely made the cut to get into callbacks. But the moment she came into her callback, it was mind-blowing. I mean, she was incredible. But she was the first kid who came in, so I didn't realize that we weren't about to see 20 kids that were all, you know, superhuman actors. But as reality set in, it was like, "Wow, we have our movie." She is the movie. We'd never seen that kind of focus and wisdom and poise from someone that young. I wanted the character to be as young as we could possibly push her, and she was five when she came in, which was below our cutoff. She actually snuck in.

She lied about her age? She was already being an actress.

They wrote "six" on the paper, but she was five years old when she did that first audition.

Tell me about designing the beast, the Orox. Is it inspired from a real life extinct animal?

It's inspired by the cave painting. That was really the idea, both conceptually and aesthetically-this fellow creature that was also on the verge of extinction is coming to meet or eat its parallel in her. The cave paintings are, for me, the most beautiful pieces of art on the planet. I went to see them, and it's just this stunning thing where you see this mark that was made by someone 40,000 years ago to express who they were before they disappeared. And she's in such a similar moment for her culture. And so we wanted a beast to be an expression of those paintings.

Yet today, no one can even watch VHS films from 30 years ago. Is the art we're making going to last?

I don't know? I hope so. People should keep shooting on film because who knows what's going to happen to our hard drives.

Watching things get really hard for her, it's pretty easy for people to say, "Just go with the government, get a place to live, get some food." But you decided to show that that alternative isn't as great for them as you might think.

Yeah. Something you hear over and over again down there is people saying, "We're made by the marsh. We are plants that grow here and we do not grow in other soil." It maybe doesn't make a lot of sense when you're not there, but literally the air feels completely different down there. It's a different kind of environment, and it's a different kind of mentality and culture, and it's so in sync with the food, which all comes out the ground and out of the water. There's a connection between the people and the nature they live in, as hostile as it is. It's not a superficial thing where it's the difference between St. Louis and Denver—it's a totally other place that people can't be uprooted from. People hear stories, and people tell you this stuff, whether you believe it or not they say, "My dad fell down and broke his arm, they took him to the hospital against his will, and he came back with cancer in seven places." And they believe that that that cancer did not exist until he went to the hospital—that it was something about being infused with medicine, being outside of their place that killed him. And I think that that belief should be respected and not condescended towards.

If you had a daughter, would you raise her in the swamps?

I don't know! I don't know that I should have a daughter. I've got Quvenzhané.