Dominic Cooper on blood transfusions, burning hearts and other cures for the common vampire 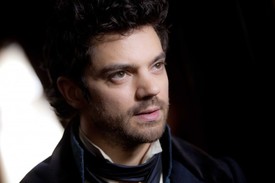 Dominic Cooper has a face you can't forget: wide eyes, wild eyebrows, and a smile that says he's capable of anything—good and evil. To prove it, last year he played the wicked Uday Hussein (son of Saddam) and his enslaved doppleganger in the crazy drama The Devil's Double, and in Abraham Lincoln: Vampire Hunter, he's balancing both sides again as Henry Sturgess, the vampire expert who trains Honest Abe to kill, while hiding a few secrets himself. We quiz Cooper on the history of vampires and ask him if, like Dracula, he'd want to be immortal.

I just learned that while Bram Stoker's Dracula wasn't published until 30 years later, Americans during the Civil War knew about vampires and thought they gave you tuberculosis.

And they used to try to cure tuberculosis through blood transfusions, didn't they? They'd almost empty all their blood out and then fill them back up. That's why people died.

Or they'd dig up the corpse they thought was causing the tuberculosis and burn its heart.

Yeah! It didn't work though.

Some of those old medical things they used to do were just absolutely crazy. There's a museum in Philadelphia of dead people. I went there the other day. It's full of old medical equipment and stories of what they used to do to people who were born with two heads. It was just nasty. Some of the diagnoses and some of the medicines they gave were just ludicrous. But how would they know? I can understand why you'd dig up and body and burn the heart if you don't know any different. We listen to what any old doctor tells us, stupidly or otherwise.

Maybe in 200 years, they'll have a museum making fun of radiology centers.

"Can you believe they thought this would work?!" I think that's actually probably going to happen.

You're drawn to period pieces. Perhaps you should play an old time crazy doctor from the 1700s.

I think there's something in that, actually? There could be something really interesting about that. Now what would he be doing? He'd be getting and selling body parts or something.

A traveling doctor on a wagon.

What does he come up with? He comes up with a cure for something. Let's work this out by the end of the conversation. You're thinking of my future—are you worried about my career after this film?

Definitely not. But if a film like Abraham Lincoln: Vampire Hunter was made in England, where you're from, what historical figure would it star?

Churchill would be quite a cool character as a hunter. What would be be fighting? Not sea monsters—definitely not. It might have to be vampires. They're the only cool monsters. Zombies aren't quite right. I wouldn't believe Winston Churchill would entertain the idea of zombies. But vampires would be something he'd deal with.

The bonus of actually being a vampire is immortality. Do you want to live forever?

We all think we do. We all strive towards this everlasting skincare and the majority of us don't like getting old. We chase this idea of youth. But if you really asked people, I think very few would really want to be immortal. I quite like the idea of it, still. They say you'd get fed up eventually, but I don't think I would—I think it'd be really exciting. Though to see friends move on to the other side might be a bit bleak.

But then you'd make new friends. You'd have all the time in the world to make friends.

So you'd definitely say yes? You can't go back on this.

Absolutely. Think about all the changes we've seen just in our lifetimes—I want to see what happens next.

That is quite exciting, actually—how things have evolved from when we were young. And it's terrifying.

The only thing that could go wrong is if there was a nuclear war and all the immortal people lived.

That would be bad. I think we'd end up killing each other. But they're immortal, too. So you're stuck.