close
INTERVIEW: What would Banks herself have done if someone granted her $150K during her starving actress days? We ask.

Elizabeth Banks on 'People Like Us,' her own crap jobs, and why she wants to work with Quentin Tarantino 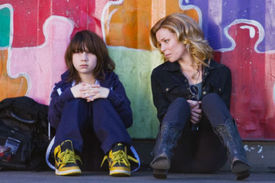 When Hollywood needs a brassy blonde, there's one perfect choice: Elizabeth Banks. At 30, when all the wan ingenues were fading, Banks broke out as one of Steve Carell's almost-conquests in The 40-Year-Old Virgin. Though she's best known for comedy—Wet Hot American Summer, Role Models, Zack and Miri Make a Porno, 30 Rock—Banks has steadily racked up some prime dramas on her resume, proving she can play everything from an alcoholic cop (Man on a Ledge) to a convicted murderer (The Next Three Days) to a bewigged sci-fi chaperone (The Hunger Games) to First Lady Laura Bush (W.) In People Like Us, Banks takes on a tough, realistic role as a single mother and near-broke waitress still angry at the father who abandoned her as a child. What she doesn't know is that the handsome stranger (Chris Pine) who's started casually stalking her and befriending her perennially expelled son (Michael Hall D'Addario) isn't just some cute loser with a crush—he's her half-brother who's entrusted to give her a $150,000 chunk of their dad's estate. (And he's selfish enough he'd rather keep the money for himself.) What would Banks herself have done if someone granted her $150K during her starving actress days? We ask.

Even though your character Frankie didn't grow up with Chris Pine's character Sam, your personalities are a lot alike. What's more powerful: nature or nurture?

I love the nature versus nurture question. I'm a big fan of nature—I do think we're definitely born predisposed to certain things. And so I think in that regard, the way that two of us connect on that level is realistic and would come from the nature over the nurture.

And you also have the same issues with growing up and controlling your tempers.

Yeah, and the other thing to remember is that we were damaged by the same person, so I think while the damage inflected on my was mostly by absence, for Chris, our dad was always there but he was still absent. There's a continuity to our lives that we're unaware of.

It seems random until you look at what's behind it.

You grew up in a big family yourself. Did having lots of people around shape you as much as Frankie was shaped by always being alone?

Do you think you and Chris Pine look related?

I think we look a little alike. We're two good-looking white people. They all look alike.

And you both have the same blue eyes and blonde hair as Michelle Pfeiffer, even though she's only supposed to be Chris' mom.

I was a little worried about that. When they cast her, I thought, "My god—that might confuse people." But I think that was just the dream in my own head that someone might ever think that I look like Michelle Pfeiffer.

At least they didn't give you a gigantic beard so you'd look more like the dad.

Before you started acting, did you have your own period of terrible jobs like the ones Frankie suffers?

A chambermaid is such an old-fashioned, posh name for it.

It was at a bed and breakfast.

Did you have a black and white ruffled uniform?

I did not have to wear a uniform, actually. Thank god.

What would you have done back then while you were cleaning toilets if somebody had dumped $150,000 on your lap?

This is my first time seeing Michael Hall D'Addario, who plays your son.

What did you two do on the set between takes to strengthen your mother-son bond?

He's a very mature kid and he's really into music. He and I had a very interesting relationship. It was important to me that our personal relationship sort of mirrored our relationship in the movie. That just kept things very easy so there was not a big transition from hanging out to "Action!" We're a little antagonistic in the movie—with a touch of love—and that's kind of how we were around each other. I tended to give him a little s--t every once in a while.

As well you should.

Yeah! He's 11. He thinks he knows everything. It's the job of all adults.

There's this tension in the film where Frankie is falling for this handsome stranger named Sam, not knowing that he's spending time with her because he's her brother. The film plays it pretty chaste, but were you open to pushing her crush farther, say with a physical scene?

I would have been up for anything, but that wasn't the movie we were making. We were always really aware of walking a fine line with the incest of it all. I really felt that the timeline of Frankie's emotions really worked with the movie, that the moment she really does open up to this guy as a romantic possibility is just about the same moment that he reveals that he's her brother. It really culminates in a great way. And I think it's important for the movie that we have an initial scene at the bar where she rejects him because I really do think that she doesn't want to sleep with him. He slowly has to build trust with her, and that happens along the same way that she slowly falls for him. I think if I had met him and wanted to be with him romantically right off the bat, tonally, the movie would have felt very weird.

In a way, that almost makes it harder to watch because we see how long it takes for her to trust someone.

Exactly. It has to be a slow burn in order to have the impact that it does when he ultimately reveals the truth.

How have things changed for you since March when The Hunger Games came out?

Gosh, well, I won an MTV Movie Award—that was cool. People have really embraced Effie as a character, which is great. I'm grateful from the bottom of my heart to all the fans and to Suzanne Collins for creating such an amazing character.

I don't think I noticed how deep her character was in the books.

I think it's easy to write her off as comic relief or a clown, or to assume that she doesn't realize what's going on. But of course, Effie's been doing the job that she does for a long time. She's seen a lot of kids die, she lives in the capitol, she's oppressed, she understands to be afraid of the regime. To have that understanding requires someone very smart who knows to keep her mouth shut and do her job, which also sets up an amazing dynamic between her and Katniss because Katniss is someone that she can't control and who reflects on Effie. Anytime Katniss behaves badly, it's bad for Effie, so that dynamic is really fun for the movie.

Good point: She doesn't get the luxury of laying low.

The word is you're doing Charlie Kaufman's next picture Frank or Francis. Is he as mysterious in person?

I don't know when we're going to get to shoot it? It's a project that's in limbo right now. I hope we get to make it—I will be there with bells on.

Going forward, what kind of projects do you want to pick for yourself?

I love great directors. I'd love to work with Quentin Tarantino. I've worked with some great writer/directors in my time—Oliver Stone, Kevin Smith, Gary Ross, Judd Apatow—and they're always very exciting to work with. You feel like you're serving someone's vision, and the vision is so clear and strong and all of a piece. Those are always really fun projects to work on.