close
Because if you take your girl to Magic Mike, she'll make you renew your gym membership 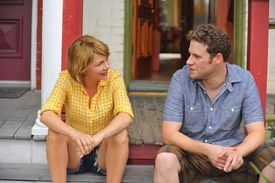 BEASTS OF THE SOUTHERN WILD
You'd be hard pressed to find another indie more lauded than this one. A Sundance discovery, Beasts tracks a little girl named Hush Puppy squatting in a patch of half-submerged Louisiana with her secretive, drunken dad. When a hurricane destroys their shacks, they'd rather rely on their own kind, not the government's interference. But who's going to rescue Hush Puppy from the man-eating mastodons coming to get her?
Director: Benh Zeitlin
Writers: Lucy Alibar, Benh Zeitlin
Stars: Quvenzhané Wallis, Dwight Henry, Levy Easterly
Genre: Drama

I HEART SHAKEY
It's dad's big break! He's got a gig as a master chef and a luxurious apartment in Chicago—but though the fine print stipulates "no pets," he and his daughter refuse to get rid of their dog, Shakey. Enter '80s legends Steve Guttenberg and Beverly D'Angelo as the militant dog sitter and high-end kennel owner who claim they'll "help" them hide their giant dog.
Director: Kevin Cooper
Writers: Kevin Cooper, Eric Stolze
Stars: Beverly D'Angelo, Steve Guttenberg, Steve Lemme
Genre: Comedy

TAKE THIS WALTZ  **OUR FAVE FLICK OF THE WEEK**
Michelle Williams is married to Seth Rogen, a loving but large child. She meets a new guy who looks manly enough and he becomes her escape valve from a plodding romance. Love must be more than playtime and TV watching, but she's forgotten what else to want.
Director: Sarah Polley
Writer: Sarah Polley
Stars: Michelle Williams, Seth Rogen, Sarah Silverman
Genre: Dramedy

NEIL YOUNG JOURNEYS
You may not expect to find the man behind The Silence of the Lambs rocking the camera alongside veteran musician Neil Young—somehow the mix of serious and sensitive seems off balance—but director and long time comrade Jonathan Demme follows the musician through a concert with observational camera work that'll make audiences say "It's like being there, but better."
Director: Jonathan Demme

TRUE WOLF
This rough home movie about a couple who domesticate a wolf points a finger at what we call "comforting" civilization to ask how different we are from the wild—and if that difference is good for us.
Director: Rob Whitehair

BUSONG
A young woman mysteriously afflicted with burn-like scars dreams of being healthy enough to bear a child. Her brother seeks help from a shaman as the two navigate a jungle full of silent hunters and panicked creatures. It could be modern day Philippines, or it could be centuries ago—their situation feels wholly removed from the march of time.
Director: Auraeus Solito
Writers: Auraeus Solito, Henry Burgos
Stars: Alessandra de Rossi, Clifford Bañagale and Dax Alejandro
Genre: Drama; Palawanon-language, subtitled

GYPSY /Cigan
When small towns get claustrophobic, residents leave. But what if you're a nomad and your small town is always moving with you? Our hero teen is aching to outrun his family—he dreams of making it out west and being confused for Pakistani. But gypsy culture is an ancient form of survival, and compromise is part of daily living.
Director: Martin Sulík
Writers: Marek Lescák, Martin Sulík
Stars: Miroslav Gulyas, Martina Kotlarova and Jan Mizigar
Genre: Drama; Romany- and Slovak-languages, subtitled

JATT & JULIET
Jatt is a messy desi and Juliet is a sophisticated kudi. En route to Canada, the two are forced to travel together. But Jatt's roguish charms only work on other girls and Juliet's elegant designs morph into tantrums. Will Jatt and Juliet learn to love eachother? Will we love them?
Director: Anurag Singh
Writer: Dheeraj Rattan
Stars: Diljit Dosanjh, Neeru Bajwa, Jaswinder Bhalla
Genre: Romance; Punjabi-language, subtitled

LAST RIDE
Hugo Weaving is on the run. Why? He won't say, but one thing is for sure: his son isn't down for his dadventure through the Australian Outback. Deprived of school, structure or any nurturing females, the kid is anxious. But dad's in no place to stop his flight from civilization—he has to run if he's going to keep his kid. Bonus: hear Hugo Weaving's real accent!
Director: Glendyn Ivin
Writers: Mac Gudgeon
Stars: Hugo Weaving, Tom Russell, Anita Hegh
Genre: Drama

RUNWAY COP
He's a Korean cop with a beer belly and an aura of B.O., but on this undercover gig he has to pose as a runway model. Who knew going deep-undercover could be so demeaning?
Director: Terra Shin
Stars: Ji-Hwan Kang, Yu-ri Sung
Genre: Action; Korean-language, subtitled

THE MATCHMAKER
A clueless teen takes a job working for a matchmaker. In 1968, the secular world is having a sexual revolution—what use is pairing virginal Jews following their family's orders? Maybe this teen can start his own sexual revolution.
Director: Avi Nesher
Writer: Avi Nesher
Stars: Adir Miller, Maya Dagan, Tuval Shafir
Genre: Comedy; Hebrew-language, subtitled

THELMA
Sisters Thelma and Hanna and runners following in their mother's sweaty footsteps—she would have been a professional runner, too, but she had them instead. When a car hits Hanna and possibly cripples her, they can't afford the operation. Thelma's answer is to race for a prize that will fix her broken sister and end keep the women in the family on their feet.
Director: Paul Soriano
Writers: Froi Medina, Paul Soriano
Stars: Maja Salvador, Jason Abalos, Tetchie Agbayani
Genre: Family Drama; Tagalog- and Filipino-languages, subtitled

UNFORGIVABLE
A widowed Frenchman retires to Venice with his new lover. It's peaceful until his pot-stirring daughter visits to share (or invent) unforgivable histories to break them up. He hires a detective, the daughter disappears, and the lover spends a lot of time away from house. Will their pasts (real or otherwise) sink them like stones in the canals?
Director: André Téchiné
Writers: André Téchiné, Mehdi Ben Attia
Stars: André Dussollier, Carole Bouquet, Mélanie Thierry
Genre: Suspense; French-language, subtitled