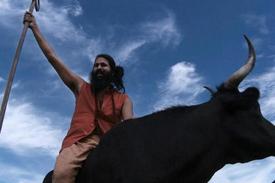 KUMARE, our pick of the week

THE DARK SIDE OF LOVE
Julian's been diligently caring of his ailing mom, while his brother's nursing a drug habit and accumulating debts. When their mother dies they have to inter her together, which disinters a decade of resentment. How the women in their lives cope with the drama remains to be seen, but the root of this ramshackle indie is the neediness that binds the men.
Director: Jorge Ameer
Writer: Jorge Ameer
Stars: Jorge Ameer, Ramon Estrada, Harsha First
Genre: Drama

THE LAST RIDE
Henry Thomas (aka E.T.'s Eliot) is almost unrecognizable as the legendary Hank Williams, country music's original bad boy. Here we see him in the late stages of alcoholism and sickness. Williams famously died during a cross-country drive, and the nature of that death adds to his mystique as a man who couldn't be stopped on his way to a woman, a bottle, or a show.
Director: Harry Thomason
Writers: Howard Klausner, Dub Cornett
Stars: Henry Thomas, Jesse James, Fred Dalton
Genre: Drama/Biography

NATE & MARGARET
You might recognize 52-year-old Margaret from TV's Roseanne and 19-year-old Nate from recent indie The Wise Kids, and if their odd couple situation looks like Harold and Maude, all is not precisely as it seems. Margaret's an aspiring stand-up comedian and Nate's a gay student filmmaker. Their fringe dwelling makes their friendship seem like a warm nest inside a hard world, but it's challenged and threatened with destruction.
Director: Nathan Adloff
Writers: Nathan Adloff, Justin D.M. Palmer
Stars: Natalie West, Tyler Ross, Conor McCahill
Genre: Dramedy

CYBORNETICS
With the ethos of Another Earth and the production values of Plan 9, Cybornetics brings us a future rife with biomechanical advances. The populace is so dependent on their devices that they've integrated their bodies with their smart phones. Into this brave new world enters prototype A.R.C. 1, a cyborg designed for an undisclosed military project. The perfect soldier may be the most human among them.
Director: Dwayne Buckle
Writer: Dwayne Buckle
Stars: Raw Leiba, Pascal Yen-Pfister, Hillary Hawkins
Genre: SciFi

THE INVISIBLE WAR
Kirby Dick (This Film Is Not Yet Rated) takes on another sexually charged taboo: the rape of American female soldiers. It's a crisis widely swept under the rug. It's a travesty for the victims, and the blame game points a finger at superior officers who can't afford the time or trouble of punishment. But this doc aims to drag this problem out of the shadows.
Director: Kirby Dick

KUMARE    *BOXOFFICE'S PICK OF THE WEEK*
Vikram Gandhi sought spiritual enlightenment but was leery of people who sold it, so he figured his quickest path to debunking the frauds was to become one himself. But in the process, he built a following that proved nothing is as fake as he expected. This one's endorsed by both Larry Charles (director of Borat) and Deepak Chopra—talk about stars aligning.
Director: Vikram Gandhi

REPORTERO
Since 2007, 42 journalists have been killed in Mexico, and this spree of violence against the press is frequently stoked when these writers try to report cartel crimes. Sergio Haro is one of few journalists willing to cover the narcotics-related crimes that corrupt Mexico's officials. He'll put his life in danger for it—according to him, his life would be worthless if he didn't.
Director: Bernardo Ruiz

ORDINARY MIRACLES: THE PHOTO LEAGUE'S NEW YORK
Documentarian Nina Rosenblum has spent her career documenting points of historical fascination in her native New York. Her latest film about a group of still photographers from who redefined the way we looked at America promises to go even deeper into the role of New York as a capital of culture, creativity, and national identity.
Director: Nina Rosenblum

MEN ON A BRIDGE/ Köprüdekiler
In modern Istanbul, two illegal street vendors and a cop work the Borsphorous Bridge, the long passageway that, like Turkish culture, joins Europe and Asia. Naturally at odds, the cop and vendors create obstacles to the other's survival. How they make it is a mystery even to them, but what's left if they don't?
Director: Asli Özge
Stars: Cemile Ilker, Umut Ilker and Fikret Portakal
Genre: Drama; Turkish-language, subtitled

ALL ABOUT MY WIFE
Do Korean filmmakers hate marriage? Who knows, but they definitely like making movies about how much it sucks. As is the case with this comedy about a wife willing to move across the country to be with her husband, though he's so sick of her he'll hire a Casanova to lead her astray. Jerk.
Director: Min Kyu-Dong
Stars: Lim Soo-Jung, Ryu Seung-Ryong, Lee Sun-Kyun
Genre: RomCom; Korean-language, subtitled

TERI MERI KAHANI
A romance across time, this love story follows two souls who vow to be together through their many lives and yet find obstacles in every incarnation. From modern England, to '60s Bombay, to Victorian Punjab, their romance is beset with troubles. At least the couple finds themselves in the sexiest of locales. Bit of advice: enjoy the scenery, it's fleeting.
Director: Kunal Kohli
Stars: Priyanka Chopra, Shahid Kapoor
Genre: Romance; Hindi- and English-languages, subtitled

SAGUNI
When an average Joe decides to throw his hat in the political ring, the authorities in place are mysteriously assassinated one by one. The suggestion is that politics in India are super easy to infiltrate—but a career in the field may be a very brief endeavor.
Director/Writer: Shankar Dayal
Stars: Mumtaj, Pranitha, Karthik Kumar
Genre: Drama; Hindi-language

STELLA DAYS
It's 1956 and Tipperary is reeling from the integration of electricity and the hiring of a young priest. Their oldest priest is an ex-matinee star who keeps his secret hidden under his frock. Ignorance is bliss until a young priest plays one of his films in the town theater. Catholics hate false idols, and these don't think better of matinee ones.
Director: Thaddeus O'Sullivan
Writers: Antoine O. Flatharta
Stars: Martin Sheen, Stephen Rea, Trystan Gravell
Genre: Drama