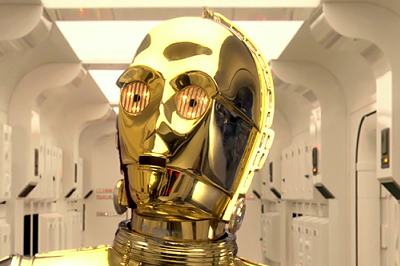 The Alien universe is known for its, duh, aliens. But it also has androids. Androids who can be jerks.

In the first Alien, the android Ash (played by Ian Holmes) was a cool, calculating sociopath who callously lied to humans, tricked them into thinking he was real, and maneuvered them to their deaths, all so he could take a sample of alien larvae back to his evil corporate masters. But in Aliens, Lance Henriksen's Bishop was the precise opposite and stayed loyal to his flesh-and-blood crewmates. And in Prometheus, we now have Michael Fassbender's suave android David, a robot who looks down on his mortal masters.

Despite being superhumanly smart and strong, not one of them survives their movie unscathed. Clearly, being an immortal, brilliant robot-man doesn't pay in the Alienverse. Are androids just not cut out for a space trip of cosmic terrors? To find out, lets look at four other famous androids to determine their odds of outwitting an Alien film.

The galaxy's most famous fancy gentleman has seen plenty of terrifying things: Galactic civil war. The destruction of 40 gajillion innocents. Luke's outrage at not being able to go to Toshi Station to pick up some power converters. He even found himself the object of literal worship by furry little bear creatures just before bearing witness to the explosion of the second Death Star. And he did all it armored in gold plating and snippy complaints.

How he'd deal in the Alien universe:

Two words: "Oh dear!" In the Alien films, androids and humans rarely mesh in their goals and tactics, but they all have a soothing, methodical approach to battle. Not C-3PO. When he sees terrifying monsters in The Empire Strikes Back, he bleats "Beastly things!" He tends to panic, suggest surrender, cry out in terror. And even when he's calm, he's a stuffy little snob. Not exactly the kind of cold, calculating analysis needed to survive an alien attack.

Odds of survival: 0%. C-3PO will get his circuits fried when an alien mother mistakenly tries to implant an egg in his non-existent throat. His last words? "Goodness gracious me!"

The Android: Andrew, AKA The Bicentennial Man

Andrew, lovingly and stalkerishly played by Robin Williams, only wants one thing: To be a real boy! He spends the titular 200 years of his film learning how to think mortal, replacing his robotic parts with human organs, and finally deciding to let himself die of old age just to make a point about being alive. Or something. Frankly, the idea that we have to die in order to truly live is silly, ya big dumb android. Still, Andrew saw many horrors in his ten-score years on this mortal coil, including the death of just about everyone he ever loved.

How he'd deal in the Alien universe:

In space, no one can hear you scream. But can they hear you emote? Bicentennial Man says: "Maybe!" In the Alienverse, while his crewmates are literally losing their heads, Andrew is infuriatingly distracted by trying to understand the alien brain. Slowly but surely, he creates cybernetic versions of alien organs to replace his robotic parts in a pathetic attempt to learn what it means to be huma—um, make that, a savage alien killer.

Odds of survival: 90%. The aliens are so unmoved by Andrew's quest to prove he's alive that they won't even bother killing him. Instead, he's found floating in space 40 years later, reciting dialogue from Patch Adams and trying to laugh his crewmates back to life.

The Android: The Replicants from Blade Runner

Ridley Scott clearly has a thing for androids. He not only made them a major plot point in the Alien universe, in his first post-Alien film, he made them the stars. The conflict between androids and human beings was so combustible, we're still arguing over if Harrison Ford is an android himself. (The answer: not in the movie, but definitely in real life.) And in Blade Runner, the androids—called Replicants because euphemisms are totally futuristic—are subjected to some tremendous horrors, specifically a lifetime of slavery followed by a preprogrammed early death.

How they'd deal in the Alien universe:

They would kill every single one of them.

No, seriously. The Alien monsters wouldn't stand a chance. Replicants' invulnerability and nihilism makes them unafraid of aliens. And the skills they've learned from an artificial lifetime of working in dangerous space mines can be adapted to deliver murder most foul. But before you get your hopes up, know that they're not fighting on mankind's side. The second the aliens figure out how to speak human languages, they'd be able to explain that they're really looking for, you know, humans. Since the humans are enslaving the Replicants, they'd have no problem with that plan and politely GTFO of the aliens way. Humanity destroyed, Replicants free. Everyone wins but us.

The Android: V.I.C.I. from Small Wonder

Small Wonder's Voice Input Child Identicant—yes, the clumsiest of all acronyms, making her the greatest of all androids—is possibly the least equipped for a world of danger. Built by a bumbling robotics engineer, she spent the vast majority of her artificial life living in an affluent suburb. Her only enemies were nosy neighbors and the perils of adolescent obesity. Yet despite it all, she managed to stay hidden and un-confiscated throughout the run of Small Wonder. That's quite an accomplishment!

How she'd deal in the Alien universe:

V.I.C.I. is surprisingly well-equipped to thrive. She's emotionless, powerful, and full of conveniently placed gadgets. She's also incapable of harming humans. She'd have no interest in selling them out to her corporate masters, since she was programmed by someone who violated his own professional obligations. And when the aliens attack, she can overpower them while adorably misunderstanding the subtleties of human idioms.

Odds of survival: 50%. If the Alienverse has any nosy neighbors, she'll be outed before she can convince her human crewmembers that she comes in love, laughter and piece. Her biggest enemy isn't the aliens—it's us. With our awareness of how happily an Alien android can work against humans, even if they don't (or can't) harm us themselves, we'd have her and her pretty curls dismantled before you can say, "Get away from her, you bitch!"