close
FEATURE: The producer of Ted takes us behind the scenes

How to make a teddy bear beat up Mark Wahlberg 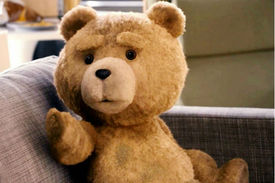 When I first read the script for Ted, it was the funniest thing I've ever read. It's just outrageous in the greatest way. It's Seth McFarlane released from the constraints of television and saying stuff he's been wanting to say for 10 years. But even though it stars an animated bear, we couldn't treat it differently than an R-rated comedy—and at the same time, we couldn't create a big, expensive character who would weigh on the budget of the film like an albatross. Our rule was that technology would be second to creativity.

Of course, you can't just run a camera past an empty space and tell all the actors to imagine a bear. So for Ted, we created these Stuffies, teddy bears with simple rod puppetry that our visual effects producer would walk around to suggest Ted's performance so everyone would have a sense of how tall the character would be, where the character would be, where he'd end up sitting and whether he was standing or slouching in that chair. Meanwhile, Seth would be doing the dialogue off-screen so you would get used to hearing Seth's voice, but projecting it onto the puppet. Once that was all rehearsed, we removed the puppet from the scene and shot the empty space, but now everyone is used to how fast he walks across the set and where to look in the chair.

So much of comedy is about timing and actors playing off each other. But if you have a CG character, there's no improvisation and the performance doesn't always feel connected to the voice. That was our challenge: to make a comedy where Ted could literally be in the moment in every scene. How can we make an animated character feel immediate, like he's really there?

Seth has great animated experience and he wasn't just our director and our voice, he was our actor—we motion-captured his performance. And we didn't record him in a booth, we recorded him in the same environment as Mark Wahlberg and Mila Kunis. Of course, if you take the Ted character and shrink him down, he's essentially a third the height of a man. So if Seth was to look at Giovanni Ribisi's eyeline, Seth would have to look three times as tall as Giovanni—say, if Giovanni is 6 feet tall, then 18 feet is the top of his head and 16 feet is his eyeline. So much was in the head and neck motions, but as Seth trained more and more, he kind of understood where the eyeline would be. And, of course, the person who's supposed to be looking at Seth is staring way down low just above his kneecaps.

We had to shoot a scene where Ted is scared of thunder, so in one shot he runs across the room, lands in the bed between Mila and Mark, annoy Mila and Mark as though he's just pushed his way in between the two of them and affected all the bed covers, and then sing a song. I think he gives the finger in the middle of it. We tried to use special effects to create an interactive environment on the bedding and we were kind of successful in it. But we were more successful in that we didn't limit the animators while giving them some motion to really feel like Ted is running across the bed.

Another tricky sequence that I love is when we had to do a big party scene where Ted fights a duck. That was complicated. But probably my favorite scene to block out was the fist fight between Ted and Mark. One of the hardest things to create is contact between a CG character and a human, and this is a long, knock-down, dragged-out, ass-kicking fight. There's punching and hair-pulling and smacking and kicking and strangling—everything. It's two minutes non-stop and we had to make people feel the impact of the punches when there's nothing hitting Mark—he has to create the hits. And there's not even anything for him to hang on to—he has to create that, too. His performance is remarkable. You never doubt for a minute that there's a teddy bear kicking the ass of Mark Wahlberg.

Ten years ago when I did Stuart Little, no one had ever done CG fur. And now here we are bringing a magical teddy bear to life and making the audience believe in him so much during the first five minutes that they forget he's a teddy bear and just think he's this foul-mouthed dude who's really cute.