close
INTERVIEW: The documentary provocateur returns with his most incendiary film yet

Kirby Dick on his U.S. Military Rape Expose: "This Film is a Three-Pronged Attack" 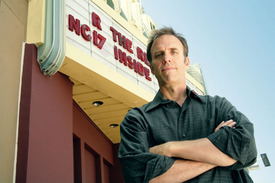 Kirby Dick has made 10 documentaries and most of them are about sex. Not sexy sex—sinister sex, like his film Sick: The Life And Death of Bob Flannagan, Supermasochist, or 2004's Twist of Faith, about a man's recovery from being sexually abused by a priest, and especially his last flick Outrage, which exposed closeted gay politicians who voted against Don't Ask Don't Tell—and their own secret sexual lives. His newest doc, The Invisible War, unearths the largely buried military rape crisis where violated women (and the occasional man) find their attacks swept under the rug in service of keeping honor and order-and often because the rapists are the same superior officers to whom the victims are supposed to report the assault. If it sounds like a '70s horror movie, that's because it could be. The cover-up extends into all branches and even bars the brutalized victims from medical assistance.

All sniggering at his name aside, Kirby Dick is a documentarian who clearly believes that sex and scandal intersect more than we're comfortable knowing—and that's why he's determined to tell us all about it.

Your projects show a lot of interest in the darker side of sex.

The Invisible War is about some really horrifying stories. Though this is a documentary, you don't hide your sympathies in order to sound neutral.

What I'm trying to show is the experience of these subjects, the profound sense of idealism, betrayal and psychological devastation they've suffered. I'm trying to bring the audience inside their heads. Not only the minds of my subjects, but the minds of the spouses and families who are also devastated by seeing their loved ones traumatized. All of these people had great faith in the military. So my goal is really to bring the viewer inside the mind of the subject to understand the experiences through their point of view.

Did you talk to a rapist?

We tried very hard to find that person. We asked military defense attorneys and whomever we could find with a connection to them. We could do the interview in shadow [to keep the rapist anonymous]—obviously, what they've done is heinous but their participation in the film would be heroic. They would be helping us. It could have exposed aspects of the perpetrator's psychology, but we weren't able to get that. What we were able to get, particularly from the point of view of investigators and Army trainers, was insight into the psychology of these often serial perpetrators. We also got access to this series of Navy studies that I don't remember seeing exposed as extensively by any other journalistic outlet. The studies were so unknown that people in the highest levels, even in the departments that deal with sexual assault, didn't know about these studies—despite the fact they were Navy studies.

Do you have a personal investment in this story?

No. My father was in the Navy but he certainly never spoke to me about this at all. This is unexplored territory and required a serious investigative journalist undertaking. And this was really meant as a letter to a few people: the Secretary of Defense, the President, whom I don't know if he has seen it yet, and the Joint Chief of Staff—the people who can really make changes. This is an open letter to them and it's structured in a way they would be moved by, but would not make them defensive, which is why our film is in no way anti-military. Our subjects, in fact, were quite proud to have served and said they would not be in a film that was anti-military. I know the way these emotional stories have carried has made a significant impact on the policy makers who've seen it. The military is aware of unprosecuted rape crimes as an issue, but four-star generals have told us that this film said more about the issue than all of the briefing papers they got on the subject in the course of their careers. And eventually the Secretary of Defense, who saw it, held a press conference two days later and instituted some policy changes. This film is a three-pronged attack: it's meant to be a moving and powerful film experience, an advocacy tool and a letter to a very small group, 8-10 people, who can change policy.

The investigations into the rapes of these women are stonewalled in part because they can be ignored or covered up. In dealing with the justice system inside the military, did you fear representing it as ignorant?

Well, the military has its own justice system and there are many good people within that system. Thirty, forty years ago, civilian society experienced a partial transformation in the way they approached the issue of sexual assault—the problem is still significant but the civilian world became more successful at investigating and prosecuting the crimes. The military has yet to go through that transformation. They have to investigate and fight this problem with the will they would approach a war, because these are really enemies from within. And until it does that, the military is will continue to have this problem.

Tags: Kirby Dick, Outrage, The Invisible War, This Film is Not Yet Rated
Print