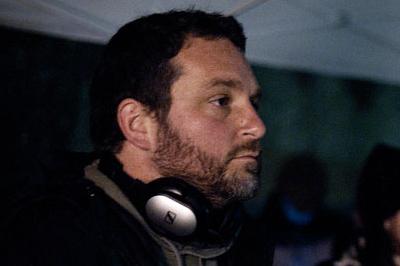 Walking to my interview with Colin Trevorrow, director of FilmDistrict's indie love-fest Safety Not Guaranteed, I dropped my voice recorder on the sidewalk; a demure crunch accompanied a small spray of black glass. The loss forced me to rescue my backup: a decommissioned iPod that lived at the bottom of my bag. Reviving it reminded me: this was the recorder I used to interview Trevorrow back in the early 2000s, when we were both just starting.

In 2004, Colin Trevorrow was at San Francisco's DocFest with Reality Show, a documentary about the making of a reality TV pilot. In it, a horn ball entrepreneur rallies a newbie crew, some half-dressed women and crates of booze in a Mexican motel. After the script-less project imploded, Trevorrow turned the footage into a doc about a crew with a promiscuous urgency for employment got stuck to an "entrepreneur" with a hunger for promiscuity. Some would call this turning lemons into lemonade...the entrepreneur called it tart PR and keeps it out of public view.

Safety is inspired by reality but that's where it's relationship to documentary ends. Its love story unites a dour magazine intern with a possibly unhinged Washingtonian who's written a classified for a time travel partner—"I have only done this once before. You must bring your own weapons." Trevorrow's breaks out charmer splits the difference between sincerity and ironic distance, and puts him in the position of enjoying the idealized ascent to high-cred indie "stardom." Not simply following in the lead of Mark Duplass (Puffy Chair, Cyrus) and Lynn Shelton (Humpday, Your Sister's Sister), he also cast these multi-hyphenates, thus showing what flowers teamwork in the garden can yield. Talking to me on this overcast day, he proves time machines are everywhere, and not just for Trekkies, romantics or regret-mongers. Still, his break out is a quirky indie, so I wasn't gentle.

This iPod recorded our interview in 2004 when you were here for Reality Show.

Oh, my God! That was you!? A writer in Seattle asked me about that—he was talking about you?

Yes! That was Tyler Foster. He used to be with Boxoffice
.
Was our interview in San Francisco? If it was, that was my first interview ever!

Well, I've become combatant in my old age so, about Safety Not Guaranteed...are you into quirk or just mental illness.

I think we're all a little crazy—I know some people who are a little crazy but still functional and this guy [referring to the writer of the classified ad] goes pretty far. I mean he did convince himself that this woman [an ex girlfriend] was dead and he is delusional, but in his delusion he built a working time machine.

So as long as it's constructive....

Ok, fine, I'll bite. Either quirk is a flaw in a system or it's the thing that used to make European comedies special. If you're quirky you're wearing your flaws on your sleeve and if those flaws are charming they suggest you've survived but sustained damages. Really, it's become this signifier for indie authenticity. If you've ever seen CuteOverload's "Sad or Cute" page, you know the feeling.

That word is just thrown around a lot and when I look at something like Juno, which I like, the dialogue doesn't feel like real people to me. For the most part, making the people in Safety Not Guaranteed talk like people was a high priority to me. If it's quirky, I can't fight that, but whatever word we use to describe it, it wasn't manufactured.

The story is based on a classified ad that became a meme. What's so inherently fascinating about it?

For me, I think what's fascinating is the longing behind the words but also a search for a partner, which is what the movie is about.

And why it had to be a romance?

We see a romance in the need to do this thing—go back in time and do a thing—but this character can't do it alone. The message here is that both these people are kinda fucked up and maybe the goal is to find someone who's crazy like you to march through time with. I think there's something inherently fascinating with the idea of being able to go back and change something personal to you and if I was to ask "when do you want to go back in time?" it might be for something minor like "I want to go back two years ago because the way I broke up with this person wasn't cool and I want to do that differently." I got some red on my ledger, and I think we all do. And that's what grabbed me.

Well mental illness may be a solo sport but you had good help in Seattle. That was Lynn Shelton, director of Your Sister's Sister, with the big hair at the High School ballgame, right?

Duplass, who also executive produced, is clearly her pal, but did you choose him because he's a pal or because he looks unhinged and backwater while holding a rifle?

No, I chose him because he still looks like a normal guy despite holding the rifle.

You could imagine someone like...James Franco—a great actor—dude can look crazy. Mark, however, has a softness that takes edge off that crazy. He's a warm human to talk to and look at and hear speak, and cutting the crazy with a little warmth makes him into a character we'll be ok watching Darius get down with. We'd be worried for her otherwise. We walk that line and ask "Do I want him for her? Am I ok with that?" And a guy like Mark Duplass, who can sit and sing a song by a campfire and really mean it, goes a long way to help us trust him with our Darius.

One of the facets of their relationship is it's not clear how mocking their jokes are. Which is in tune with the classified ad—you don't know what part is funny or serious, who the joke is on? If we're reading Bradbury or Infinite Jest?

Right. "Must bring your own baggage." There's ridicule in their dynamic—it's inherent because when they meet she's disingenuous, she's playing a character. You know a lot of shows have used their first scene together at the grocery store as the clip to represent the film—the Tonight Show just did that—and it bugs me because if you see it out of context you don't know that she's performing; it's just like "well Aubrey isn't acting very well." She also "performs" in the football game. Later the two are on that log in the woods and she tells him she'd go back to save her mom and she changes-she's one person at the beginning and another at the end—and Duplass says "sometimes I think you're with me on this mission and other times I'm not so sure." The tonal turning point is the home video they make about the mission, when Mark tells the camera "this mission is about regret." That's when you start to realize we're going to a different place. But when the dynamic changes between the two of them, that's...

—the hardest part of tackling this as a subject.

Right. Making the tonal tightrope walk work. We're not tackling time travel metaphorically. There are not time travel rules; we don't have to deal with the results nerd-wise. That's not what the movie is. It's about characters who need a time machine and all evolve to different levels of satisfaction and are becoming self-aware. Self-awareness with characters is something I care about very much. Jake's journey in the film is about the improvement of his self-awareness. Self-awareness is a huge change for people internally. When you realize "I'm kind of an asshole," it's a big moment for you.

Ha! "When you realize you're an asshole...that's a big moment?" You're being completely sincere but—

I didn't mean you.

Oh, I know, it's ok. What's funny is how much distance this idea contains, but it's totally sincere, non-ironic distance. Depression also wrestles with distance. Is that why Audrey Plaza's Darius is depressed?

I didn't think she was depressed—I thought she was a girl spit out into a world that has nothing to offer her. She represents a generation coming out of college: all that's available to her is an internship and she has to live with Dad. College used to mean you were going forward. It seems like a lot of young people are being sent backwards.

Then what is time travel? It doesn't look literal or about regret anymore. Is it about choosing your place and time?

Darius just starts the movie not wanting to be here right now. The most evident scene is when she's at the bus stop with Arnau (Karan Soni) and says ‘I don't want to be here, I want to live when people were killing themselves for each other.' I don't feel the weight of her depression because beneath it I see the girl who loves Somewhere Over The Rainbow and that peeks through. It's metered out enough that we're not dealing with bummer Tom Hanks at the beginning of Joe Versus the Volcano.

That's a reference! Thank you, Colin. You know, this was our own little time machine.

You and me...pretty crazy, huh?