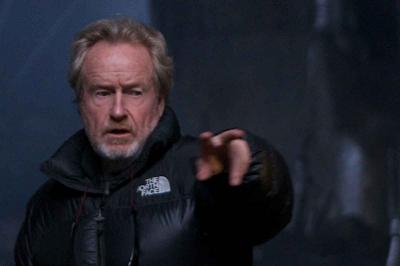 With the release of Sir Ridley Scott's Prometheus last weekend, we're taking a look at the history of his films at the box office in this week's Number Crunch. Considering his status among the so-called Hollywood elite, one might naturally assume that Scott's resume is packed with huge financial successes. Not exactly. Especially not lately.

Scott's 2010 adaptation of Robin Hood famously broke the bank with an outlandish $250 million budget. Universal, Scott, and star Russell Crowe all hoped they could justify the cost with a film that would set the stage for an ongoing franchise. Audiences didn't buy it. They found Crowe's Robin Hood too gloomy and the film too much like a rehash of Gladiator. The film ranked in only $322 million worldwide—a solid sum only if the movie had cost half as much.

To find Scott's last in-the-black success, you have to leap back three films and five years to 2007's American Gangster, which exploded out of the gates and kicked off the November holiday season with its $43.6 million domestic opening weekend. While we can attribute some of the film's positive word of mouth and overall appeal to the presence of bona fide box office draw Denzel Washington (who co-starred with, you guessed it, Russell Crowe), the film's $266.5 million global tally was barely enough to make good on its $143 million negative cost.

In fact, if we jump to the year before, in which Scott released the wine country romance A Good Year, we find yet another Russell Crowe film and yet another critical, commercial, and financial disappointment. If you're counting at home, that's four Russell Crowe films, three flops, and one minor hit. A Good Year was made for $57 million and amassed an embarrassing $42.1 million at the worldwide box office, making it less profitable than Body of Lies and the third-least profitable film of Scott's career.

And those are just his most recent films. Looking over his last decade of work, it becomes evident that somewhere along the line, Scott's great talent became overshadowed by unjustifiably large budgets and dull, rehashed concepts. There was the financial disaster that was Kingdom of Heaven, the worst summer-opener in years in the United States, which grossed only $47.4 million here against its $180 million budget. (Luckily, it did better abroad.) 2003's Matchstick Men didn't fare much better—the quirky Nicolas Cage vehicle barely broken even on its $62 million budget.

But before that, Scott was arguably in his "second" prime. Black Hawk Down was a certifiable hit, albeit not as financially successful as many might believe due to its enormous $125 million budget, yet 2001's Hannibal knocked it out of the park. The long-awaited Hannibal Lecter sequel dominated February of that year and went on to make more than four times its production budget (nearly three times the total budget with marketing costs in play).

And, of course, there was Gladiator. The 2000 Oscars' Best Picture winner cost a hefty sum $145 million, but audiences who fell in love with the film sent its box office to over $457 million worldwide. To this day, it's still Scott's most financially successful film of the past 20 years-though Hannibal isn't far behind.

Ten films in 12 years is a breakneck streak. It's easy to forget that in the 18 years between 1982 and 2000, Scott directed just seven films—and of them, only two were certifiably profitable: 1991's Thelma and Louise and 1989's Black Rain. Even 1982's Blade Runner wasn't a huge hit at the time. The $28 million film grossed just $32.9 million at the box office. Consider that loss an investment: it became a genre classic and did half of the work in building up Scott's fan base around the world.

So what's Ridley Scott's most successful film? His second. 1979's Alien redefined the science-fiction/horror genre—or invented it, depending on who you ask. Made for just $11 million, the classic blockbuster grossed nearly ten times that, raking in almost $105 million worldwide. To put that in perspective, Alien was more profitable than Gladiator, Hannibal, and American Gangster—combined.

So it's no wonder after his 30 year string of mostly flops, Scott wanted to revisit his first and best franchise with Prometheus. The recent success of big sci-fi flicks like Avatar, Inception, and District 9, seemed to prove that fans were anxious to see a return to the glory days of hard-R-rated science fiction. But the comeback story could end there.

While Prometheus debuted to a respectable $51.1 million domestically, critical reception has been only somewhat positive and the fan reactions are even worse. Prometheus carried a $180 million budget (surprisingly lower than that of Robin Hood), and with the 3D and IMAX boost, it should track close toward a $140 million domestic finish. Overseas, the film is on pace to gross at least $250 million and could make a run for $300 million. And if Prometheus manages to be given a China release later this year, it would tip the scales in the film's favor. As of now though, we're projecting a worldwide finish near $400 million—certainly enough to qualify the film as profitable, but leaving Scott and 20th Century Fox in the position of trying to figure out if they can justify another big budget for the rumored sequel(s). Perhaps more importantly, now that Scott has alienated (pardon the pun) some of his original fan base by his disapointing return trip to the Alien mythology, the big question is: will they keep showing up for his future projects?