close
FEATURE: Because we make him 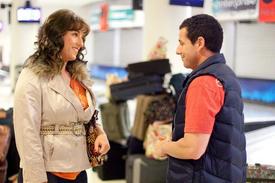 Those are all faux movie titles that starred Funny People's hack comic, played by Adam Sandler. They were meant as jokes, but you might be hard-pressed to tell the difference between Sandler's fictional resume and his real one.

With the loud thud created by That's My Boy's $13.1 million opening weekend, it's high time to ask what's been going wrong for Mr. Sandler at the box office. There's no doubt that the veteran SNL alum built up a devoted following over the past decade and a half, but many of his original fans have slowly left him behind—and instead of being inspired to win them back, Sandler's doubled-down on his "low brow" family flicks.

That's My Boy is far from the beginning of Sandler's downslide. 2011's Jack and Jill, his sister/brother double role comedy, was a financial disaster most of the industry saw coming from a mile away—the premise alone was a bad joke. Jack and Jill grossed only $150.5 million at the global box office on its $120 million budget, but That's My Boy is headed for an even bigger disaster with its $105 million price tag. Even in a best case scenario, the film will need a miracle to get anywhere near a $100 million gross—and if it doesn't, it will be Sandler's first bona fide comedy to make less than $100 mill since 2000's Little Nicky.

Of course, the flipside is that the rest of his comedies have made at least $100 million and are considered generally consistent box office performers. So what are his biggest hits versus biggest bombs—and is there anything Sandler can learn so he can bounce back?

Of Sandler's five foulest flops, the bottom two slots are taken by 2009's Funny People and 2002's Punch-Drunk Love. The former grossed an underwhelming $71.8 million three summers ago (for a 0.66 gross-to-budget ratio) despite a huge marketing campaign bolstered by Judd Apatow's name, while the latter angsty love story made just $24.7 million (a 0.57 gross-to-budget ratio).  In third place is Sandler's 2007 post-911 drama Reign Over Me, whose gross-to-budget ratio clocked in at 0.56 after a $22.2 million global box office run.

To no one's surprise, Little Nicky claims the number two spot on this ill-fated list of missteps. Not only did it gross a paltry $58.3 million against a $112 million negative cost, it was Sandler's first ever box office bomb. But even that notorious disaster doesn't outmatch the financial disappointment of his 2004 dramedy Spanglish. That film's $55 million worldwide gross represented less than half of its total budget.

The common denominator: four of Sandler's five biggest stinkers all came when he attempted to actually act. And tragically, Punch-Drunk Love, Funny People, and Reign Over Me make up three of his top four highest Rotten Tomatoes scores. So audiences don't even care when his movies are good. Sure, we can make fun of him for being in moronic comedies, but we're partially to blame if we don't support Sandler when he aims higher. The shame is that Sandler deserves credit for daring to try dramas, which most comedians shy away from. (Can you picture Rob Schneider crying?) But as audiences don't bother seeing him in anything other than comedies, then the budgets for these films proved hugely unjustifiable—something Apatow probably should have noted as the last in line to try to shoot a serious Sandler flick. As for Little Nicky, well, that comedy was just awful.

And here are Sandler's most profitable films: 2010's Grown Ups, 1998's The Wedding Singer, 1999's Big Daddy, 1998's The Waterboy, and 1996's Happy Gilmore. That means that four of Sandler's five most profitable films were four of the first six films he ever made. So what's Adam Sandler to do to turn his career around? Revisit his roots, forego the paycheck that he no longer needs, and hire some writers capable of delivering fresh material. The same applies for any of his future ventures into more serious roles (should he dare attempt another). It's up to Sandler to stop looking for the cash cow and get back to basics: entertaining fans instead of gunning for cheap laughs. If he can do that, he might finally merge the best of both box office worlds.