close
FEATURE: Hail to the toughest presidents in American history 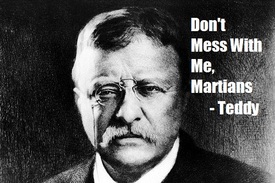 Abraham Lincoln was so larger-than-life that he seems written rather than real. And we don't just mean the fact that he was 6'4", a giant by the standards of his time. He was a lawyer, a laborer, a politician and a frontiersman—all very manly pursuits—and over the course of his amazing life, he also survived numerous maladies that would have felled most mortals including: near-drowning, frostbite, being clubbed on the head by robbers, smallpox,malaria (twice!) and being kicked in the head by a horse. The only thing ridiculous about Abraham Lincoln: Vampire Hunter is being asked to believe that Honest Abe could cut a swath through the population of undead bloodsuckers without getting a statue in honor of that, too.

But Abe wasn't our only super hero president. American history is replete with men whose exploits prove they could battle horrors in order to keep the world safe for truth, justice and imperialistic expans- er, I mean, the American way. Here are three other Presidents worthy of being turned against the various things that go bump in the night.

You know that George Washington never told a lie. You also likely know all about his profitable whiskey business, his false teeth, and of course, his wig. He also had a death wish for cherry trees. But did you know he also almost single-handedly-and accidentally-started the chain of events that led directly to our war for independence?

As a young officer in the Virginia militia, Washington was sent by the colonial Governor into Ohio territory to protect British business interests. When the French Canadian commander Joseph Coulon de Villiers was murdered outright by one of Washington's Iroquois allies, the so-called "Half King" Tanacharison, over an old grudge. De Villiers' death sparked a diplomatic crisis that culminated in the Seven Years' War, which in turn led to the postwar tax disputes between Britain and the American colonies that directly caused the American Revolution. All because a young George Washington couldn't keep a handle on the men under his command.

But if America stands for anything besides mom and apple pie, it's for doing with the land whatever the hell we want, even if it ends up causing tap water to become flammable.

George Washington: Lumberjack reveals the horrifying truth behind the cherry tree slaughter, and the blunder that caused a revolution: a young officer's desperate attempt to stave off the destruction of humanity at the hands of nature itself. While on patrol with the Virginia Militia and their native allies, young George Washington stumbles upon a beleaguered French Canadian outpost under siege by mysterious forces beyond their understanding. They soon must join forces to destroy the greatest threat to American interests ever conceived—sentient fruit trees bent on removing European colonies by any means necessary.

In the end, it turns out that Washington really could tell a lie—that is, it was necessary to prevent the world from finding out that an ancient menace may yet still sleep in the Ohio River Valley. To be directed by M. Night Shyamalan.

Andrew Jackson was the closest America has ever come to having Dirty Harry as president. His military career began as a 14-year-old POW in the American Revolution, during which he caught smallpox and learned to hate the British with the fire of a million suns. He fought in numerous duels and would carry a bullet from one of them inside his body for the rest of his life. He was a wealthy slaveowner who railed against what he considered to be undemocratic forces (yeah, we don't understand how that even works, but whatevs) and as a general, he pretty much stole Florida from Spain. When president, he closed down the national bank, defied the Supreme Court when they tried to prevent him from evicting Creek Indians in order to steal gold, and when a crazy man tried to shoot him, he nearly beat his would-be assassin to death with his own cane. Also, he taught his beloved pet parrot to swear, which paid off when said parrot squawked profanities at Jackson's funeral.

So yeah, surviving duels, smallpox, assassination, and even the rule of law. Clearly Jackson was practically immortal. Which is why Jackson was uniquely qualified to fight the walking dead.

President Evil: Resurrection aims to tell the untold true story of the Second Cholera pandemic of the 1830s, which caused its victims to appear to die, then awaken with an insatiable hunger for human flesh. The burgeoning United States begins to collapse from within as entire regions go dark (or, well, the 1830s equivalent of going dark) when their populations succumb to the illness. Enter Old Hickory. When all else fails, President Jackson embarks on a secret trip into the hills of Georgia accompanied only by his friend Francis Scott Key and his fists. Jackson must use his cowboy cop style of justice to end the outbreak by any means necessary. To be directed by Clint Eastwood.

Author. Statesman. Naturalist. Hunter. War Hero. Imperialist. Boxer. Advocate of the manly mustache. Football fanatic. Elephant hunter. Our 26th president had a life that would be rejected as unbelievable were it a novel. The sickly scion of an impossibly wealthy New York family, Teddy suffered from severe asthma that he conquered by sheer force of willpower—no, really. He managed to get elected to public office less than a year after finishing college, wrote an acclaimed history of the American Navy before he was 25, spent time as a rancher in the Dakotas, became a reform-minded New York police Commissioner and famously resigned as Assistant Secretary of the Navy to form a volunteer cavalry unit which he took with him to Cuba in the Spanish-American War. He even got himself elected Governor of New York. And all of this happened before he ended up President of the United States.

Anyone who reaches the age of 40 with even half of that on their resume could probably spend the rest of their lives supporting themselves with profits from their memoirs. But what if Teddy's story was even more unbelievable?

Teddy Roosevelt vs. The Martians reveals the exciting secrets behind everything from Teddy's miraculous willpower cure for asthma, to why he thought speaking softly while carrying a big stick didn't sound incredibly creepy to anyone with a passing familiarity with Freud. Ranching in the Dakotas after the untimely passing of his wife, young Teddy spends his days moping about and wheezing. That is, until invaders from the Red Planet arrive, intent on staking out the badlands as the first leg of their "conquer the humans" tour.

Armed with nothing more than some primitive rifles and his host of horses, Teddy takes it upon himself to teach the alien invaders once and for all just who God shed his grace on in these here parts (Spoiler: It's America the Beautiful). Fortunately, with the help of a young writer from England named Herbert Wells, they soon discover that the invaders have serious allergies to Earth bacteria. They kill the now gasping and wheezing Martians one by one, though not before antigens produced by the aliens' immune system cure Teddy of his asthma once and for all.

Sure, his experiences instill within him a seriously disturbing obsession with military power and severe bloodlust. But at least we understand why Americans hate immigration.