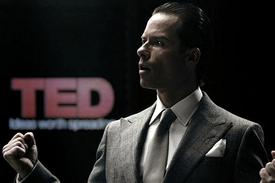 If you don't recognize Guy Pearce in Prometheus, then he's done his job. The British-born, Australian-raised actor plays Peter Weyland, the space entrepreneur who founded Weyland Corp., a company that would later deem the crew of Alien "expendable." Talk about a harsh boss. One of the fun facts of Prometheus is that Peter Weyland is already alive—according to sci-fi lore, he was born in 1990, making him an ambitious 22-year-old today and near-ancient by the time Pearce plays him in 2093. We ask Pearce if Weyland the man would be proud of what his company becomes, and his own opinions on extraterrestrial life—and if aliens exist, do they make sci-fi space movies?

Your character's name lives on in the Alien series as Weyland Industries, a corporation more sinister than he is himself. How would he feel about what his company becomes?

It's hard to say. He's obviously a man of incredible vision and incredible ambition. I have to assume that for a lot of those people whose companies end up becoming bigger and bigger, the question of morals and the question of what's positive and negative perhaps becomes a little blurred and tricky to decipher. I think the power that somebody like Weyland ends up having also makes one's own feeling about the enormity of their company a tricky thing to get around, as well. I guess some people tend not to think about it too much. If you look at the Weyland company website—which, obviously I've done to try and understand my character even more—you get an idea of what he's developed technologically. Looking at all of that stuff, I was thinking, "Well, as long as he feels he's creating what he thinks to be good technologies for a better world, then he'll just keep on going." He'll just keep on growing and growing and taking over. He's a fascinating character to play in this world—and fascinating also because, as you say, he sort of becomes a bit mythical in the films that follow.

After the film, you shot a viral video of a TED talk where Weyland gives a speech 60 years before Prometheus starts. Did you learn anything new about him by playing Weyland as a younger man?

Ridley Scott and I had talked about the TED talk before, and I think by the time we finally did it, I was fairly clear on who he'd been through his life. Strangely enough, I think in his mind as an older character, he probably feels the way he did when he was younger, anyway—even though he's obviously very old. But it was a nice opportunity to play perhaps a more robust version, and to actually express some of the philosophy that you perhaps don't see in the film. It was funny because after all the journalists here saw the movie, they all said, "Ah, right. So that TED talk was shot for the movie and just cut out, was it?" I said, "No, not at all. It was purely designed as a marketing thing for the film."

Another part of the film's philosophy is that people have a hard time reconciling science and religion, just as we see today. Do you think that will always be the case?

As long as a certain segment of the population only believes in one and not the other, and vice-versa. Then it isn't ever going to be reconciled, I suppose. Obviously, there are many people who sit somewhere in between and are able to reconcile the two points of view. But there are some pretty extreme feelings and views on both sides out there. It's fascinating, but I think there will always be two camps unless there are major discoveries that completely quell one or the other.

It does seem like in our lifetime, we'll have the option of going on an exploratory space mission to discover firsthand the things we've only seen in telescopes. Would you want to be one of those space tourists even if it meant you might never come back home?

It's a great question because how could you not want to go and explore. But at the same time, this idea of never coming back: do you really want to give up what it is that you do know in order to go and discover more? I'm not really sure. Would you rather leave it to others to do? The idea of exploring out there is massive—I've struggled to even see enough of the country that I live in, let alone the various galaxies and planets out there.

Think there's anybody who has seen every corner of Australia?

No, but I reckon some people have seen a lot of it.

Do you believe in extraterrestrial life yourself?

Absolutely. There's no way I can believe that we are the only living creatures of any of those planets that happen to exist in the universe. I just couldn't believe that's true. I don't think we were necessarily created by another life that's out there, though.

Whatever that form of life is, I wonder if they make movies?

Exactly. That's the other strange thing—when you do start to wonder about the life out there, then what the hell are they like? How have they developed? Is there another Prometheus out there somewhere?

How do you feel about Pluto being demoted as one of our planets?

I would be sad—has that actually happened?

I heard that, but I wasn't' sure if I actually knew that or if it was an idea that was bandied around. But no, it doesn't feel right because as a kid growing up and learning about the planets, you go, "Pluto's part of it." Why has it been demoted? It's like it's been turned into a noxious weed. It was a plant, but now it's just a noxious weed. What's it considered now, then?

It's considered a dwarf planet. They found a lot of objects bigger than it in the solar system and said we either have to have 300 full planets or just eight.

I think it should get special treatment. I mean, it's been in there for so long.

In Prometheus, you work with Logan Marshall-Green, and in your next film Lawless, you're with Tom Hardy. On film, they look like twins. Are they easier to tell apart in person?

Absolutely, but funnily enough, I was literally looking on IMDb yesterday at something or other that had a photo of Logan with a beard. Tom has a beard at the moment, and staring at this particular photo, I said to my wife, "Look—he and Tom could be brothers!" They're both really good-looking guys, but if you saw them next to each other without their beards, I don't think that the likeness is that obvious. But there are photos where they could pass as brothers or twins-and funnily enough, Logan actually has a twin.

All three of them in one room would be every girl's fantasy.

If you could overhear people discussing Prometheus as they walk out of the theater, what would you want them to be talking about?

We did overhear people talking about it after the premiere the other night. We walked out as the crowd did and somebody said, "Oh my god—that's the best horror movie I've ever seen in my entire life." They were completely shocked and freaked out by it—in a positive way, not completely disturbed. But ultimately, you just want every film you do to be effective in the way that it's designed, whether it's a love story or a horrendous story. You just don't want to hear people saying, "I didn't believe it." That's the ultimate thing—particularly the character that you're playing. You certainly don't want to be the weak link in a strong movie.

The very first film I saw you in was Priscilla, Queen of the Desert and I had this idea that you were a comedian. Do you miss getting to be funny?

Oh, no. I love drama. I really like funny stuff as well, but I don't know that it's my forte. And I don't really get asked to do it much. I have been asked to do a few comedy-oriented things, but I haven't found them funny so I didn't do them. I'm fine with the strange and weird worlds that I've entered in to in film. You know, I find such variation in the things that I've do that I always feel quite satisfied.

What is there left that you'd love to play?

I don't know? I'm open to being surprised. I don't have a list of things that I want to check off—in fact, on the contrary, I really prefer not to know until the script comes along and so I can be surprised by something. I find if I've got an idea in my head, then there's something that dies as far as my motivation. There's something that propels me in the surprise. So for me to feel, "That's my ultimate character I want to play," I just don't view the world like that for some reason or another.

You mean: if you know the destination, why take the journey?

You signed on to Iron Man 3 before The Avengers came out. When The Avengers' box office exploded, did it spill over into your enthusiasm for Iron Man? Did it add more pressure?

What would you do if you made a billion dollars like The Avengers did?

I'd certainly give a lot of money to people and animals that needed it! Definitely sit down and have a good think about who needs money more than I do. Probably buy myself a new car as well, because I need one of those.