Quvenzhané Conquers Hollywood: 20 Questions for the 8-year-old star of 'Beasts of the Southern Wild' 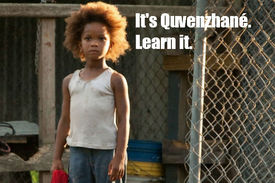 Every year, there's a small film by an unknown director that makes it to Sundance, wows audiences, convinces the critics, wins a major award and gets snatched up by shrewd indie distributor Fox Searchlight who positions it for an Oscar run. Along the way, its leading actress becomes a star. It happened in 2010 with Jennifer Lawrence in Winter's Bone, again in 2011 with Elizabeth Olsen in Martha Marcy May Marlene, and now all eyes are on 8-year-old Quvenzhané Wallis, the star of the surrealistic swamp drama Beasts of the Southern Wild. Quvenzhané was just five—a year under the casting agent's age limit of six—when she lied about her birthday and won the role of Hushpuppy, a tough bayou girl who's being forced to grow up fast. Her daddy Wink is dying, a hurricane is about to wreck their trailer home, and worse, an ancient beast named the Orox is en route to prove it could eat her for breakfast. With fans already insisting she deserves to win an Oscar nomination before she graduates the fourth grade, Quvenzhané is the center of attention. And she loves it. We sat down with the headstrong and brave breakout star to learn more about the girl who's causing such a fuss.

This is the first time a lot of people are seeing who you are and they might think you're a lot like Hushpuppy. How are you different?

She doesn't wear pants. She has more animals and her father is dying. And she gets to explore the world and do whatever she needs to.

What do you think other young girls will like about her?

That she's brave and she'll do anything to take care of herself.

You do a lot of stuff in this movie like running around with sparklers. What was your favorite part to shoot?

Whenever I burped and screamed. All the times I screamed.

You're a loud screamer. I kind of want to ask you to scream now so I can hear it in person.

I can do it. I'll have to cover my ears, though. [She lets loose an ear-piercing scream and grins]

I'm from the desert. I've never lived in a place that wet and swampy.

I've never been to a place like that, too. I'm not used to being dirty and stuff and being in the mud.

You must have had dirt in your elbows and all over.

How do you think other kids manage to grow up there?

I have no idea! I couldn't grow up there.

Was making a movie different than you thought it would be?

Yes. I thought it was just going to be, like, a mean director who tells you what to do.

Did you like having cameras on you? Do you love being in front of cameras at home?

What's a movie that you love that you wish you could have acted in?

You were five when you auditioned for the movie. Did you have any idea what would happen after that?

What did you and the guy who plays your dad do on the set in between takes?

Tell me about shooting that scene where they pour out all those fish in front of you.

Ugh. That was stinky. And gross.

If they're fried, then yes.

How to you feel about the fact that soon, people in all sorts of places are going to watch your face on the big screen?

It's already happening. Different people come up and ask for autographs and pictures, which is happening now.

And you have a long name. Does that get tiring?

What do you think it's going to be like going back to school next year after your big summer?

They probably don't even know what the movie is.

If you could picture 20 years into the future, what do you want to be doing?

Being a dentist. I like to see people smile with white teeth.

Do you think dentists have as much fun as actors?

What's something that you really want people to know about you that they might not know from the movie?

That I really do know how to burp and scream.

Click here to watch Quvenzhané in a scene from Beasts of the Southern Wild.