close
FEATURE: Then cross your fingers that it won't happen

The Ends of the World, As We've Seen Them: Pick Your Favorite Movie Apocalypse 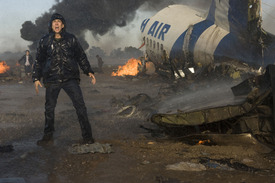 After a last-ditch space laser rescue mission fails to prevent an asteroid impact on Earth, Steve Carell is promptly dumped by his wife. With everyone on the planet having just three weeks left to live, Carell and Keira Knightley go on a soul-searching road trip in Seeking a Friend for the End of the World. Call it the Lovepocalypse. But c'mon-is the apocalypse really going to be bubbly and romantic, or is it going to be more like getting into a fistfight with Satan? There's more than one way to destroy the earth. Here are four films with drastically different takes on Armageddon.

One year before the new millennium, Arnold Schwarzenegger capitalized on Y2K paranoia when he played retired cop Jericho Cane, pit against Lucifer in the flesh (he's a Wall Street banker!) who will destroy the world on New Year's Eve. Though its writers added enough classic Ah-nold quips to satisfy rabid fans (he tells Satan incarnate, "Go to hell"), End of Days deviates from the Governator's usual outings in that his star power is secondary to the trendy Nu-Metal that dominates the soundtrack. Yes, End of Days is a terrible movie. But if you have to watch the devil get stabbed in his heart as Dick Clark drops the ball on Times Square, it may as well be to the jams of KoRn and Limp Bizkit.

The Fertilocalypse: Children of Men (2006)

Sick of baby pictures cluttering up your Facebook? There's blessed relief in Alfonso Cuaron's film about the end of pregnancy. When women can't conceive, the next generation can't be born, which means the Earth will die out not with a bang nor a whimper-just an old man grumbling for someone to hand him the remote. Children of Men tracks Theo Faron (Clive Owen) as he tries to find safe shelter for the world's last pregnant woman in an empty, grasping world where everyone wants her fetus for their own political gain. Men arguing over what a woman should do with her body? Sounds like this apocalypse isn't that far-fetched.

The cause for Earth's demise in The Signal? A satellite broadcast whose transmissions produce raving, murderous lunatics. And how do the people of Earth react with they come across this killer channel? By slaughtering their families and neighbors with whatever's handy—baseball bats, insecticide—and then happily getting ready for a dinner party. Shot by three directors in 13 days for a grand total of $50K, it's The Crazies meets Shaun of the Dead in a flick that's equal parts splatter film, black comedy and post-apocalyptic love story. And apparently, the film itself is a destructive force—a man stabbed two people in his movie theater during a showing in Fullerton, California.

When math rules everything around him, Nicolas Cage goes crazy. As MIT astrophysics professor John Koestler—a father and the only possible savior of mankind-Cage is as Cage as Cage gets. He's as over-the-top absurd as the film's own end-of-the-world vision, some mumbo jumbo about numbers, backwards numbers, time capsules, aliens, solar flares and really creepy children. Even for movies about the apocalypse, Knowing is a total blowout of nonsense. It only makes sense if you interpret the destruction of the world an allegory for Cage's divisive appeal—is he man or maniac? And if we're all going to die anyway, who cares?