close
OPINION: Why a bow and arrows is girl heroes' weapon of choice

Seriously, ladies—what's with the arrows? 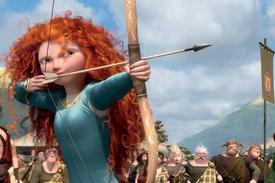 Between Merida in Brave, Katniss in The Hunger Games, and the little girl who shoots Emily Blunt in the leg in The Five-Year Engagement, the archeress looms large this year, as she has almost every year since ancient times. Female archers were major figures in Greek mythology, from the goddess Artemis—the deity of hunting—to the Amazons, who famously mutilated their bodies for the sake of deadlier aim. The recent spate of girl-hero movies have found many heroines picking up a bow and arrow alongside—or even in lieu of—a gun. But what's the connection between archery and femininity? And what does using of a bow and arrow reveal about modern movie heroines?

Girl heroes are old-timey. In a world full of weapons that get more fatal and futuristic by the day (and that's just in real life), there's something quaint and DIY-ish about using some wood, twine, and a sliver of metal to seriously maim someone. Unfortunately, killer archeresses tend to live in distant times—usually in the past, sometimes in the future—as if female heroism were a lost tradition or a utopian wish that's impossible today. Brave’s Merida (Kelly Macdonald), for instance, lives in a bygone Scotland when princesses still lived in drafty castles. Her skill in archery serves her best in a subversion of fabled archery contests of yore: she promises her hand in marriage to the suitor with the best aim, then enters the contest herself. Kinda modern, but she's still, you know, forcibly betrothed and all.

Girl heroes don’t need to be—or look—strong. Archery requires a great deal of upper body strength. An adult beginner bow typically has a “pull” of 40-45 pounds, while older models, like the medieval English longbow, have a “draw weight” in excess of 100 lbs. But you’d never glean that from watching female archers on the big screen, who tend to be as thin as the arrows they let fly. With the exceptions of, Jessica Biel and MMA fighter-turned-actress Gina Carano, actresses seldom possess the bulging muscles of athletes. Thus, female strength gets redefined as determination, cunning, and compassion, rather than, you know, being strong. Wood nymph Keira Knightley is a perfect example of improbable strength in Princess of Thieves, in which she plays expert archer Gwyn, Robin Hood’s plucky daughter. Ugh, don't even get me started on the rope bikini top they made her wear during battle scenes.

Girl heroes are nonconfrontational. An archer’s greatest strengths are her focus, patience, and precision. She can best utilize these qualities when she has a bit—or actually a lot—of distance between herself and her target. Accordingly, she becomes a lot less powerful in one-on-one combat. In The Hunger Games, Katniss (Jennifer Lawrence) proved that point by staying hidden in treetops for most of the duration of the game, wisely avoiding either killing or being killed. Significantly, she’s also hiding from Cato (Alexander Ludwig), an angry athlete built like a truck that Katniss, badass or not, would have little chance of defeating in a fistfight.

Girl heroes are solitary. Wisecracking archers are hard to come by. The combination of the self-possession and self-seriousness that comes from battling evil tends to produce a bunch of flinty-eyed Ally Sheedys who have little time for friendships or romance. This is clearly a double standard—when was the last time you saw a male hero not get the girl? Take the eponymous heroine of Hanna (Saoirse Ronan). Between shooting an arrow into a reindeer’s heart (and repeating the death blow to Cate Blanchett), Hanna learns that the things that have made her strong and special—genetic experimentation, knowledge of countless languages, a lifetime of combat training—are also the same things that leave her orphaned and alone. Bruce Wayne ain’t got nothing on her.

Girl heroes in co-ed ensembles are supporting characters. No duh, right? Assigning archery to minor female characters portrays bows and arrows as lesser or specialized weaponry. Femaleness and archery skills end up reinforcing each other’s secondary status. Even the dude archers in ensembles—William in Snow White and the Huntsman, Hawkeye in The Avengers, and Legolas in The Lord of the Rings trilogy—are beta males who play second fiddle to their more macho partners. Susan Pevensie (Anna Popplewell) in The Chronicles of Narnia, for instance, receives a bow and arrow from Father Christmas while her brothers receive swords. (At least that's still better than her younger sisters medical kit?) Her warrior status gets further sidelined when she’s made queen and is rechristened with the badass warrior name of “Susan the Gentle.”

Girl heroes should be played by Jessica Biel. There's one exception to female archers' lonely, passive,old-fashioned fragility: Blade Trinity’s Abigail Whistler, played by the aforementioned Biel. The practically named Abigail carries around a compound bow that shoots three arrows at a time and lives in a world that bears a lot of similarities to our own (except for the vampires)—and she can hold her own against her partners, Wesley Snipes and Ryan Reynolds. Sure, she doesn’t have time to date, but that's because she's spending every minute that she's not slaying bloodworkers working on her biceps and lats at the gym. It's too bad Biel is trying to be a serious actress, because with Angelina Jolie gallivanting around the world for UNICEF, Hollywood is in desperate need of a lady who looks like she can kick serious ass—and enjoy doing it.