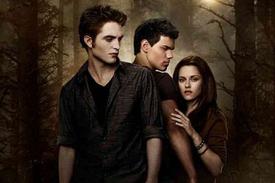 When the final Twilight film opens in November, the industry will want to capitalize on the popularity of Kristen Stewart, Robert Pattinson and Taylor Lautner. Worldwide, the four Twilight films have already raked in $2.5 billion and triggered fan frenzies from Chicago to Cairo. Surely, casting one of Twilight's three major stars in a film is a savvy business move. Or is it?

Let's start with Taylor Lautner. Despite the millions of girls screaming their loyalty to Team Jacob, Lautner's made only two films since breaking out in 2009's Valentine's Day and Abduction. The former was a financial success as it more than doubled its $90 million budget at the box office, but the catch is that Lautner was hardly the star of the film—in fact, he's 15th billed way down after Julia Roberts, Bradley Cooper, Jamie Foxx, Anne Hathaway, Ashton Kutcher and Queen Latifah. Sure, Lautner helped the film appeal to teen girls, but he's a minor part of a very large ensemble cast with far more drawing power. At least he was at the center as the lead of 2011's Abduction. Made for $60 million, the action film bombed. At home, it made just over $28 million and totaled a mere $78 million around the world. That's his first strike—but Abduction's big loss could keep Taylor Lautner from getting two more chances.

How about Robert Pattinson? His first post-Twilight role was playing the painter himself in the Salvador Dali biopic Little Ashes. Made for a modest $2.9 million (before marketing), the indie film never caught on (his mustache and bisexual makeout scenes weren't what his fans wanted to see) and earned a worldwide gross of only $767,567. Pattinson then landed the lead role in 2010's Remember Me, a 9/11 romantic drama that cost $37 million only to disappoint domestically with just $19.1 million. One year later, Pattinson starred alongside Reese Witherspoon in the adaptation of the bestselling novel Water for Elephants. With America's Sweetheart as his buffer, Elephant's $68 million budget seemed reasonable to a studio banking on a breakout date night hit, but its $116.8 million total gross wasn't quite enough to send the film into the black. Alas for Pattinson, he's on the cover of every tabloid but hasn't yet proven he can open a movie—or be taken seriously as the fine actor his directors say he is.

Last, let's examine Kristen Stewart, the actor with the largest pre- and post-Twilight career. Since her first Twilight film in 2008, Kristen Stewart has made time to star in five films. The first was Adventureland, a quasi-comedy directed by Greg Mottola of Superbad fame, which was arguably Stewart's most high-profile, non-vampire film up until last weekend's Snow White and the Huntsman. The niche film drew in $16 million domestically back in 2009, and $17.1 million worldwide. At first glance, those numbers are respectable for a small scale film. But Adventureland's large cast, which also included Ryan Reynolds, Jesse Eisenberg and Kristen Wiig, bumped the production budget to almost $10 million, which made the flick fall short of theatrical success.

Worse, her next outing, the $15.5 million southern convict romance The Yellow Handkerchief never made it to wide release and amassed a mere $318,623 theatrical gross. Ouch. And though her third film, the Joan Jett biopic The Runaways was a huge buzz-maker for Stewart and her co-star Dakota Fanning, it only made $3.7 million against its $10 million cost. It also never made it to wide release, and neither did her fourth film Welcome to the Rileys, in which Stewart played a teen hooker in New Orleans. Made for more than $10 million, Rileys grossed just $317,382 worldwide.

Which brings us to Kristen Stewart's first major role since Twilight itself: the lead in Snow White and the Huntsman. With a $56.2 million domestic opening this past weekend, Hollywood has deemed it a success. At first sight, maybe. But not with that $225 million budget, which includes marketing. Snow White needs to clear $400-450 million worldwide to deserve those accolades, yet it's only on pace for a worldwide tally around $300 million—and possibly a little less. To its credit, however, it's making strong bank without a 3D or IMAX price advantage. Maybe Universal should have added those on when they greenlit Snow White's solid gold budget.

That's three stars, eleven films and no non-Twilight hits. For Kristen Stewart, Taylor Lautner and Robert Pattinson—three young actors eager to shake free of vampire fare—that totally sucks. Being under the scrutiny of an industry is a challenge after becoming the face of a franchise like Twilight. Just ask Mark Hamill and Carrie Fisher, who gained instant and eternal recognition as the faces of Star Wars, or Orlando Bloom after the back-to-back phenomens The Lord of the Rings and Pirates of the Caribbean, and without question, almost every actor to wear James Bond's tuxedo after Sean Connery. (The cast of Harry Potter is already panicking.)

When audiences come to know an actor for one character, it's hard to see past that image and give their other ventures a shot. Snow White and the Huntsman at least gave Stewart the opportunity to headline another franchise, and Pattinson and Lautner will have at least one more crack at blockbuster success. But ultimately, it may be those small productions where their future careers lie. And studios need to remember that one actor alone is no longer an automatic box office draw. Keep budgets for Twilight's Big Three at a minimum until these stars can prove they're bankable—that is, if they ever do.

Please note: In our determination of "profitable" films, a film's worldwide gross must be at least double its total budget, including marketing costs.

In addition, marketing budgets for Welcome to the Rileys, The Runaways, The Yellow Handkerchief, Adventureland, and Little Ashes were not available at the time of the writing of this article. 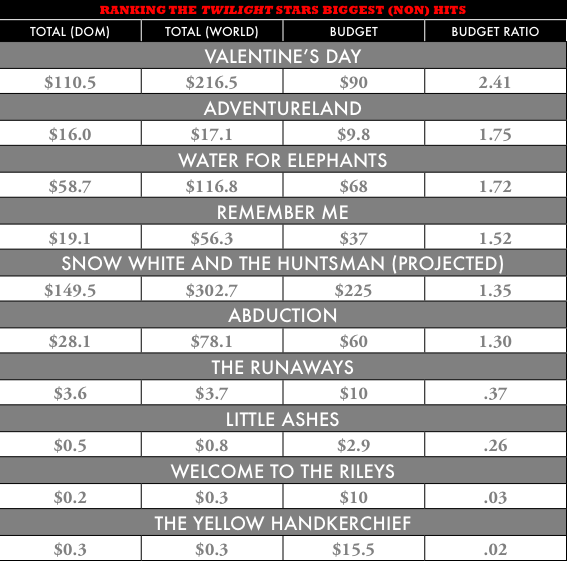