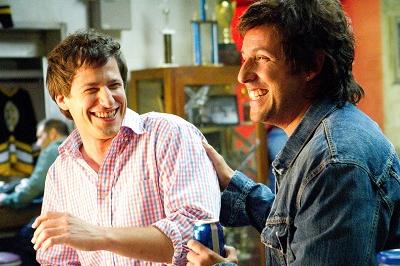 Last month, Andy Samberg said goodbye to Saturday Night Live after seven years on the show to launch into movie stardom. Or co-stardom, anyway. Samberg will play supporting characters in three of his fellow SNL alum Adam Sandler's vehicles over the next year: That's My Boy (opening this weekend), Hotel Transylvania (out this fall), and Grown Ups 2 (slated for Summer 2013). Samberg's got a guaranteed hit in Boy, in which he plays the emotionally damaged son of a creepy teacher (played by Eva Amurri Martino and her mom, Susan Sarandon) and her then-13-year-old student (Sandler). It's by far Samberg's biggest role to date, easily surpassing his bit parts in I Love You, Man, Friends With Benefits, What's Your Number? and his debut starring role in the little-seen Hot Rod.

Of course, for every Adam Sandler, Will Ferrell and Tina Fey, the NBC sketch comedy show has produced five Finesse Mitchells, Robin Dukes, and Jim Breuers. (Who? Exactly.) Samberg's come a long way since his Internet-famous days when he was only known among the YouTube cognoscenti, but it'll probably be awhile yet before his stardom will eclipse "Lazy Sunday" and "Dick in a Box." How will he fare in emulating the success of other SNL grads? Let's check the odds:

Will Ferrell (1995-2002) - Comedians more than any other entertainers have to craft a persona and embody it for the rest of their careers. Through Ferrell's impersonations of President Bush on SNL, he crafted his own niche: an overconfident, oversized oaf. He spun his Dubya knockoff into gold by adapting that buffoonish persona to a string of successful films.
Samberg's odds: 20:1. Through his most famous "Digital Shorts," Samberg has cultivated an image as a playful music geek, the Weird Al of the 21st century. Unfortunately, that's not a flexible or widely available role in the movies. And it doesn't help that he's brayed like a jackass through all of his non-SNL projects—he hasn't showcased his versatility as much as he has those horsy teeth. The blockbuster exposure Samberg'll get from co-starring in all those Sandler films will help his recognizability, of course, but at the cost of subsuming his identity under someone else's comedy.

Bill Murray (1977-1980) - Of the 140 or so cast members that have passed through SNL over the last 37 years, Murray has arguably enjoyed the best movie career of them all, having worked with the likes of Wes Anderson, Jim Jarmusch, and Sofia Coppola. Granted, Murray has also confused many a fancy-pants cinephile by starring in Garfield and Garfield 2, but no other alum has so convincingly shifted between comedy and drama-and no one will for quite some time.
Samberg's odds: 100:1. Samberg's goofy sense of humor seems allergic to the kind of ennui and world-weariness that Murray exudes even in his comedic roles, which isn't necessarily a bad thing. The douche who bragged, "I'm on a boat!" will show a softer side in the romantic divorce comedy Celeste and Jesse Forever (written by and co-starring Rashida Jones), whenever that film finds a release date. But Samberg probably shouldn't hold his breath for that call from P. T. Anderson.

Adam Sandler (1991-1995) - One of the biggest moneymakers to ever emerge from Lorne Michael's dream factory, Sandler has made, with a few notable exceptions, the same type of movie for almost 20 years. An air of self-satisfaction has surrounded the world's laziest mogul since his Operaman days, but that seems to have somehow helped him in turning his passive-aggressive nice guy act into embarrassingly huge box office payouts.
Samberg's odds: 15:1. As a skinny Jewish kid who parlayed a musical schtick into star-making sketches, Samberg obviously owes a huge debt to Sandler, who blazed his trails via the "Chanukah Song" and the "Thanksgiving Song." Samberg occasionally channels the older comedian, especially when he plays tantrum-throwing doofuses. But he never plays it as broadly as Sandler does—Sandler's for dads, Samberg's for hipsters—which means his appeal won't be as broad, either.

Rob Schneider (1990-1994) - If you can't beat Sandler, join him. Sandler has a reputation for being a loyal friend/employer to those in his close circle—a situation that's benefited Schneider for decades, if at the cost of his dignity. Schneider played annoying weirdos like the Copy Machine Guy on SNL, but he's since portrayed increasingly grotesque sideshows in Sandler's movies.
Samberg's odds: 8:1. It's nice work, if you can get it. Sure, Samberg might be getting in with Sandler's crowd, but Schneider will cut a bitch before he lets his cash cow go. Then again, Sandler might be itching to replace Schneider, who's conspicuously absent in That's My Boy, to sub in Samberg in an attempt to attract younger audiences to his movies. Watch your back, Samberg. Seen All About Eve, lately?

Jimmy Fallon (1998-2004) - Depending on how you feel about Jimmy Fallon's crack-ups on SNL, he was either Tina Fey's adorable little brother or the most unprofessional cast member ever. After his departure from the show, Fallon floundered in non-starters like Taxi and Fever Pitch despite his boyish good looks and not-terrible acting abilities. Five aimless years later, he found the gig of his life in Late Night With Jimmy Fallon, singing with The Roots and starting ice cream fights with Stephen Colbert. Some people just aren't cut out to be movie stars.
Samberg's odds: 2:1. It's actually way too easy to see Samberg as part of another variety show, one that grounds him in short-length sketches and allows him to be comedic, musical, and mischievous with casting. (Remember "Natalie's Rap," which had Natalie Portman throwing shade like it was her bizness?) Samberg might do better on a niche forum like Comedy Central or Cartoon Network, but it really would be much more satisfying to see him do his comedy on cheaper media than broad shtick on big-budget disasters. Just ask Bill Murray about that.

Chris Kattan (1996-2003) - Remember this guy? He was one of the "What is Love?" club-humpers in A Night at the Roxbury with Will Ferrell, who then padded his resume with some bottom-of-the-barrel scripts like Corky Romano and Undercover Brother before disappearing off the face of the earth. Without a marketable persona to ground him, Kattan went from SNL regular to "Oh yeah, that guy" in a couple of years.
Samberg's odds: 3:2. Oof. We sure wish the best for Samberg. He's a good-looking dude with a lot of talent and charisma. But worryingly, Samberg's been making a lot of noise in his post-SNL exit interviews about putting out another Lonely Island record instead of writing scripts. As Will Ferrell, Kristen Wiig, and Mike Myers have shown, the best way to have a movie career after Saturday Night Live is by writing your own script. Samberg doesn't even have a comedic persona that will translate easily into feature-length storytelling. He better get started on his Austin Powers or Bridesmaids, because no one else is gonna write it for him.