close
Brave fails at the one thing it promises 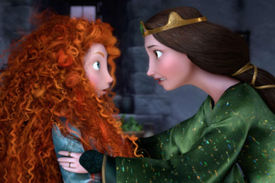 It took Brave just seven days to make more than $100 million at the domestic box office and Pixar's launched a parade of self-congratulatory rhetoric focused almost entirely on the fact that their latest hit features Pixar's first-ever female protagonist, the Scottish princess Merida. Congrats to Pixar for finally exploring the perspective of more than 50% of its audience. Still, it's troubling that in 2012, the mere fact of bothering to have female protagonist in a major studio animated film is considered novel. The applause is depressing, not empowering.

But better late than never. Brave's success will hopefully ensure future Pixar films with women as protagonists rather than living macguffins or sidekicks. However, for the future, Pixar needs to think very critically about Brave's fatal flaw: the fact that Merida fails on almost every level to attain the kind of personal agency Pixar created for a cast of anthropomorphic automobiles. Frankly, Brave simply isn't.

One critic I hold in very high esteem proclaimed on Twitter that the film passes the Bechdel Test. For those of you unfamiliar, the Bechdel test from Allison Bechdel's long running comic series, Dykes To Watch Out For, consists of three very simple rules:

1) The film must have at least two women in it

2) Who talk to one another

3) About something other than a man. This isn't limited to romance - two women talking about a male family member also fail the test.

(The excellent Bechdel Test blog is a good resource for films that pass or don't pass.)

Brave certainly passes the first and second rules. But when you look closely, the root of the conflict between Merida and her mother the queen never transcends two fundamental questions: whether or not Merida will marry, and what is a woman's proper role in a society governed and dominated by men.

One of the more unfortunate tropes in popular culture is the idea that a strong woman is someone who is humorless and disciplined. She functions as mother not only to her own children, but also to the grown men in her life. Men joke, play, and have, you know, actual personalities. Women must be the resident grown-up who sternly keeps the men in line. It's the G-rated version of the Victorian obsession with women as the caretakers of correct moral behavior who must forever tempering the base, animal urges of men who can barely contain their sexual compulsions. And it's Merida's mother's primary characteristic.

Throughout the film, Merida and her mother butt heads over Merida's refusal to heed mother's constant attempts to instill a sense of responsibility about the kingdom. In essence, Merida is being raised as a sexual peace treaty: her impending betrothal to one of sons of Scotland's three most powerful noble families is crucial to preventing war. Marital duty appears to be the sole option available to women in this universe. Indeed, it's the Queen who does literally all the heavy lifting involved in governing, and when the noble families arrive to begin their wooing, they bring no women with them and leave the Queen in sole charge of keeping them in line. Merida sees the stress of her mother's responsibility, and the fact that the men seem to spend all their time drinking and fighting while women cook, clean, and nag. Why shouldn't she reject this fate? And her rebellion—which takes the form of her never plot-relevant love of archery—she is encouraged by her jovial father the king, further underscoring the idea that mom = humorless nag and dad = the fun parent.

After the film's second act begins—we won't spoil the details here, but suffice to say it's not really conceptually related to the first half of the film or the promise of its title—and Merida and her mother are forced by circumstances to work together to evade a series of plot contrivances, they reach a truce. The Queen recognizes that a little independence might be a good thing, and Merida recognizes that taking responsibility is the adult thing to do. At least, that's what Pixar says we're supposed to feel. What actually happens is that Merida finds herself understanding her mother when she is forced to do precisely what her mom does: play the role of ubermom to every last man in Scotland. Oh, and learn to sew.

Yes, it's true that in the end, Merida is allowed to marry in her own time, and with the husband of her choosing. But it's still strongly implied that she'll only get to choose from one of the three princes she didn't want to marry in the first place. And Merida learns to accept the eventuality that she will one day take on the role her mother currently "enjoys." Meanwhile, her younger brothers remain giggling pranksters and the men continue to be rough and tumble rowdy boys who need the civilizing influence of a strong woman. Ultimately, despite pretensions to the contrary, their entire film ends up being about two women managing the men in their lives.

Frankly, Brave is a film about fitting into the patriarchy, rather than fighting against it. Entertaining? Sure. Beautifully animated? Definitely. But feminist it absolutely ain't.