Will Smith: The Last A-List Star? 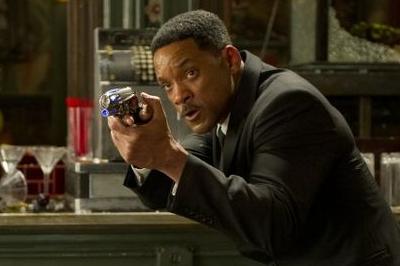 After Tom Cruise and Arnold Schwarzenegger collapsed, Will Smith was declared the world's last box office draw. Sure, plenty of A-list stars boast a following. Yet few actors are entrusted to carry a blockbuster—instead, they've been preemptively padded by a sturdy franchise and special effects, safeguards that have solidified as social media now affects a film's box office performance more than the cast. But is Smith still the most likeable and bankable actor in modern Hollywood?

Smith's first major box office hit, Bad Boys, set his career standard incredibly high. Made for a very modest $23 million, it went on to gross $141 million worldwide back in 1995. And then just a year later, Smith starred in Independence Day, one of the highest grossing films of all-time, at the time. Independence Day's astounding $817 million global take made Smith an A-list star in just two flicks—and despite costing over four times as much as Bad Boys, it still made eight times more than its budget. The next year, Men in Black gave him the second of back-to-back summer blockbuster successes when the sci-fi comedy pulled $589 million on a $115 million budget. Will Smith had arrived—and conquered.

Interestingly, these first three hits remain the most financially successful films of his career. They're also his smallest paychecks. With a salary of just $2 million for Bad Boys and $5 million each for ID4 and MiB, the canny and ambitious Smith knew that despite already being a platinum-selling rapper with a hit network show, to break into Hollywood, he had to make himself a bargain buy. Say the studios: those were the good old days.

That would change. The next year, 1998, the semi-profitable Enemy of the State raised Will Smith's paycheck to $14 million. 1999's Wild Wild West was Smith's third Fourth of July blockbuster release in four years, but it opened to half the money of ID4 and MIB. Made for $220 million (including Smith's $7 million payday), it grossed only $222 million worldwide—the first time a Smith-headliner not only failed to turn a profit, but barely broke even.

But Smith refused to risk becoming box office poison. (Take note, Taylor Kitsch.) Instead, he immediately dropped big-budget popcorn flicks for several years to work on boosting his credibility as a serious actor. But 2000's The Legend of Bagger Vance and 2001's Ali completed his trifecta of box office flops. In fact, both lost even more money than Wild Wild West. Still, his salary continued to increase to $10 million for Bagger Vance and a huge $20 million for Ali. And since then, Smith's take-home has matched or exceeded $20 million per movie.

With his move to dramatic roles a financial bust—though Ali did win him Oscar and Golden Globe noms—Smith tackled his first sequel with 2002's Men in Black II. Word of mouth was mediocre, but luckily for him the $195 million flick returned a $442 million global gross—just enough to deem it a theatrical success. So he made another sequel: 2003's Bad Boys II, which raked in $273 million worldwide against its huge $175 million budget. Not good.

But Smith's pay day continued to increase. He made $28 million for 2004's I, Robot, a modest success that made double its $165 million budget, and then played a voice in the financially successful animated flick Shark Tale before delving into romantic comedy with 2005's Hitch, a $113 million comedy that pulled over $368 million worldwide—his best profit-maker in eight years.

Shark Tale and Hitch began a string of five consecutive very successful films for Mr. Smith: 2006's The Pursuit of Happyness more than tripled its $95 million budget, 2007's I Am Legend gave him his first successful action blockbuster in a decade, and 2008's Hancock saw his successful return to the July 4th weekend. With its $624 million worldwide tally, Hancock stands as his second-highest grossing film to-date. His hot streak ended with 2008's goofy drama Seven Pounds. While it didn't lose that much money, it was the worst critical failure of his career.

From there, Smith took four years away from acting to produce and shepherd his son Jaden's own acting career. His big return—Men in Black III—debuted to a disappointing $54.6 million (estimated as of this writing) over its three-day holiday weekend debut thanks to the taint of MiB2 and the fact that The Avengers has kept audiences busy for four weeks. Even in a best case box office take of $600 million, the film's hefty $320 million price tag (including Smith's $20 million payday) means that the film will struggle to break even.

What does it all mean? Smith hasn't had a continuous string of successes, but two decades of regular hits argues that audiences still like him. You could even argue that he's the only reason MiB3 is making any money at all. But no matter how much people like Smith, the question does have to be asked: should he really command a $20 million pay day? Of his 11 biggest salaries, six of the flicks were runaway successes, two barely broke even, and two-potentially three-lost money. Despite his reputation as a hit-maker, that's not a great track record. But it's not terrible, either. And in each, Smith was the marquee draw—he's rarely paired with a powerful co-star. Without him, especially as few of these films were adored by critics, they'd have made a fraction of their final take-or, likely, they'd never have been made at all.

The answer: Yes, Smith can justify making as much as he does. And he's still young, on top of his game, and able to sell tickets. Even cutting down his salary wouldn't have done much good for any of his box office failures (other than Seven Pounds, perhaps), so the lesson is that studios need to use him cautiously so they can both capitalize on his (only half-true) reputation as a hit-maker. Control the budget and refine the script before production begins (ahem, MiB3), and Will Smith can still lead a film to a profitable box office.

That said, his next project is M. Night Shyamalan's After Earth. Considering the polarizing filmmaker's string of critical and commercial flops, it will be a battle of Smith's stardom versus Shyamalan's stigma. Which reputation will win out? Call us optimistic, but both are due for a return to box office glory. 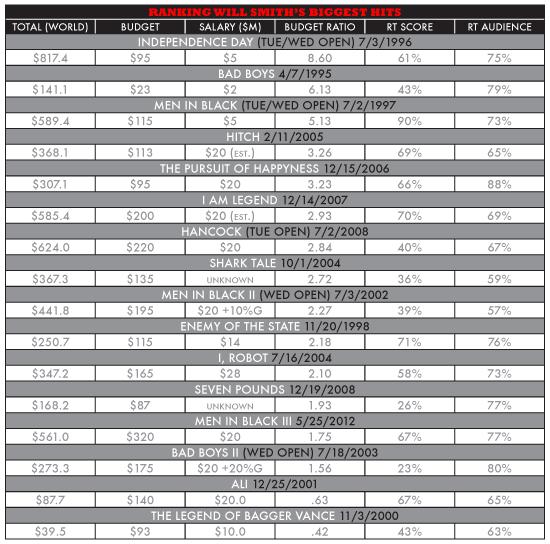