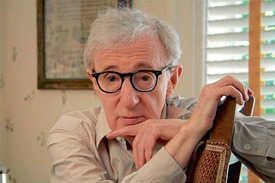 ACTING IN HIS OWN MOVIES
"When I write a script, if there is a part for me, then I play it. As I've gotten older, the parts have diminished. I liked it when I was younger, I could always play the lead in the movie and I could do all the romantic scenes with the women, and it was fun and I liked to play that. Now, I'm older and I'm reduced to playing the backstage doorman or the uncle, or something, and I don't really love that."

WHERE HE GETS HIS IDEAS
"Ideas come to me in the course of a year, and I write them down and throw them into a drawer in my house. And then, I go and look at them, and many of them seem very unfunny and foolish to me, and I can't imagine what I was thinking when I originally did it. But sometimes, there will be a little note written on a matchbook or a piece of paper that says, for example, 'A man who can only sing in the shower,' and it will occur to me, at the time, that it could make a funny story. That is what happened with this. There were some ideas in this movie that did come out of the notes that I had given myself over the year."

LEAVING NEW YORK FOR EUROPE
"It was strictly financial. The first one was Match Point. They gave me the money to make it in London, so I was happy to make it there. And then I found that other countries started calling me. Barcelona wanted me to make a film, and then Paris and Rome. I get calls from countries that ask me to come and make films there. I've made 30 or 40 pictures in New York, I can't remember how many. And then suddenly you find yourself working in London or Barcelona or Rome, and the necessity of accommodating these new surroundings forces you into areas that you would not have otherwise explored. It gives it a certain freshness and exuberance. I think Match Point would have worked in New York. But doing it in London gave it a certain freshness that wasn't shooting in Central Park or on Broadway or on Park Avenue. The scenery and very Roman sensibility in To Rome with Love makes a contribution to the picture that's beyond anything that I can contribute."

DEALING WITH FAME
"Life is tough, whether you're famous or whether you're not famous. In the end, it's probably, of those two choices, better to be famous ‘cause the perks are better. You get better seats at the basketball game, and you get better tables and reservations at places. If I call a doctor on Saturday morning, I can get him. There's a lot of indulgences that you don't get, if you're not famous. I'm not saying it's fair. It's kind of disgusting. But, I can't say that I don't enjoy it. There are drawbacks to being famous, too, but you can live with those. They're not life-threatening. If the paparazzi are outside your restaurant or your house-and actors make such a big thing of it and scurry into cars and drape things over themselves—you think they're going to be crucified or something. It's not a big deal. You can get used to that. It's not so terrible. The bad stuff is greatly outweighed by the dinner reservations."

TIME TRAVEL
"I would like to go back in time, but just for lunch. I would not like to live in the past because there are all those drawbacks, as I mentioned in my other movie [Midnight in Paris]. You don't get anesthetic when you go to the dentist. You don't get antibiotics. You don't get the things that you are used to now, like cell phones and televisions and things that are very convenient. It takes all year for the ambulance to come. You don't want that. But, it would be fun if you could, just every now and then, meet a friend for lunch in Paris in 1900, or go back to 1870 for a couple of hours and take a walk in the park, and then come right back to Broadway."

WHAT HE'S LEARNED ABOUT LOVE
"When it comes to the important things in life, you never learn anything. You make a fool of yourself when you're 20, and you make a fool of yourself at 40, at 60 and at 80. The ancient Greeks were dealing with these problems. They screwed up all the time, and people do now. All over the world, relationships between men and women are very, very tricky and very difficult. It's not an exact science, so you can't learn anything. You're always going by instinct and your instinct betrays you because you want what you want, when you want it. It's very tough. Most relationships don't work out, and don't last long when they do work out. When you see one that's really lovely, it's a rarity. It's great that two people, with all their complex exquisite needs, have found each other and all the wires go into the right places. I've learned nothing. I have years and years of failure. I have nothing to say. I have no wisdom."

RETIREMENT
"Retirement is a very subjective thing. There are guys I know who retire and are very happy. They travel all over the world, they go fishing, they play with their grandchildren, and they never miss work, at all. And then there are other people, and I am one of that kind, that like to work all the time. I just like it. I can't see myself retiring and fondling a dog somewhere. I like to get up and work. I have too much energy, or too much nervous anxiety. So, I don't see myself retiring. Maybe I will suddenly get a stroke or a heart attack and I will be forced to retire, but if my health holds out, I don't expect to retire. But, the money could run out. Sooner or later, the guys that back the films could get wise and say, 'This is not really worth all the suffering,' and then stop giving me the money. But, I still wouldn't retire, I don't think. I think I would just go write for the theater or write books."

IF HE LIKES HIS OWN MOVIES
"When you make a film, it's like a chef who works on the meal. After you're working all day in the kitchen, dicing and cutting and putting the sauces on, you don't want to eat it. That's how I always feel about my films. When I begin a film, I always think that I'm going to make The Bicycle Thief or Grand Illusion or Citizen Kane, and I'm convinced that it's going to be the greatest thing to ever hit celluloid. And then, when I see what I've done afterward, I pray that it's not an embarrassment to me. I've never been satisfied or even pleased with a film that I've done. I make them, but I've never looked at one after. I made my first film in 1968, and I've never seen it since. I just cringe when I see them. I don't like them because there's a big gap between what you conceive in your mind when you're writing and having to meet the test of reality. You write and it's funny and beautiful and romantic and dramatic, and then you have to show up on a cold morning, and the actors are there and you're there, and you don't have enough of this and this goes wrong and you make the wrong choice on something and you screw up."

WAIT—EVEN ANNIE HALL?
"When Annie Hall started out, that film was not supposed to be what I wound up with. The film was supposed to be what happens in a guy's mind, and you were supposed to see a stream of consciousness that was mine, and I did the film and it was completely incoherent. Nobody understood anything that went on. The relationship between myself and Diane Keaton was all anyone cared about. That was not what I cared about. That was one small part of another big canvas that I had. In the end, I had to reduce the film to just me and Diane Keaton, and that relationship, so I was quite disappointed in that movie, as I was with other films of mine that were very popular. To me, it's always less than the masterpiece I had been certain I was destined to make."