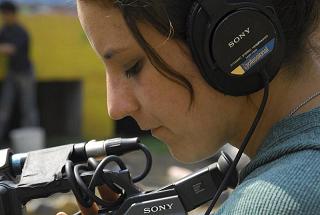 Director Mai Iskander's new documentary Words of Witness follows Heba Afify, a young, passionate journalist covering every aspect of Egypt's revolution—from overthrowing a dictator to grappling with the transition to democracy. Heba must balance her mother's pleas to stay at home, where she is safe, with her determination to cover the issues her fellow citizens grapple with. From protesters who disappear without a trace during demonstrations to a feud between Muslims and Christians that is rumored to have been started by Egypt's secretive State Security, Heba hits the streets and brings to light the stories of Egyptians who are discovering their power and taking charge of their futures. Boxoffice recently caught up with Iskander via email to discuss her new film.

How did you come across Heba and decide to make her the focal point of the film? Had you been searching for a young and politically active Egyptian to follow?

After completing my last film Garbage Dreams, which followed three young men, I wanted to return to Egypt and make a film focused on women. Then the revolution started, so I decided to focus on a female activist. I met Heba through friends in the media, who run the Egyptian-based production company Birthmark Films. Right away, I was moved by Heba's courage and complete commitment to her work. Here was someone so very young, putting her own life at risk to report the news. I also found her youthful optimism and her constant fight to overcome limitations to be especially poignant.

Heba not only navigates Egypt's revolution, but also the rigid boundaries of her concerned mother to examine the struggles, hopes and fears of a people on the brink of democracy. In her personal obstacles and triumphs, I saw a reflection of the larger struggles of the Egyptian people taking their first steps toward democracy.

Heba has to balance her ambitions as a journalist with her life in Egyptian society as a young woman and the pressure her mother places on her. Heba tells her mom that "rules that are broken during the revolution will remain broken." Does that mean social norms such as gender roles may shift?

Both men and women were a vital force during the Revolution. During the Revolution, women faced snipers and tear gas on those same streets as men. Many of the young people involved in the pro democracy rallies are women. It is the mothers of the martyrs who died throughout the revolution that constantly urge others not to let the fight for democracy that their children had started die in vain.

Was Heba often outnumbered as a female journalist? Was access more difficult for her because of her gender?

With stories such as Heba's, I sincerely hope that we can spark an open, honest conversation about the issues that affect female journalists worldwide. Her story addresses the crucial need to expand and strengthen the role of women in journalism worldwide, so that our news media can move toward a more accurate portrayal of our society that includes the perspective of both men and women equally.

Were there any moments while you were filming when you felt genuinely concerned for Heba's safety?

There certainly were times when tensions would rise in Tahrir Square, specifically surrounding Heba as people clamored for her attention in order to have their opinions heard-one such incident appears in the film—but overall Heba was never seriously threatened or hindered from doing her job that I know of.

Of course, I completely understand where her mother's worry is coming from.

Heba worries that the revolution is not finished. Do you think there is reason to be concerned that a fatigue will set in if change does not occur quickly enough?

Many Egyptians are frustrated. Sixteen months after Mubarak left office, a constitution has not been established, many are unhappy with the two running presidential candidates and many feel that justice remains to be served.

Egypt has not yet changed, it is changing. Democracy does not happen overnight. It's a long process. The country is emerging from over 30 years of dictatorship, challenges are certainly to be expected. And Egyptians have far from given up—this is apparent in the continued demonstrations in Tahrir Square. Revolutionary parties are becoming unified and the wheels of change are turning.

What do you think the future holds for the country? Do you think these elections will usher in a new era of democracy, or will the old regime remain?

One thing that is certain is that Egyptians will have to continue to put pressure on their government. Egypt's governing power needs to be rebuilt on the basis of human rights and social justice. To ensure that the government is listening to the voice of the people, Egyptians must remain vigilant and involved.

Throughout the revolution, Egyptians learned an incredibly important lesson about their own power. They discovered that they have the ability to go out on the street and say no to a dictator. So I don't expect Egypt to go back to the way it was before the revolution.