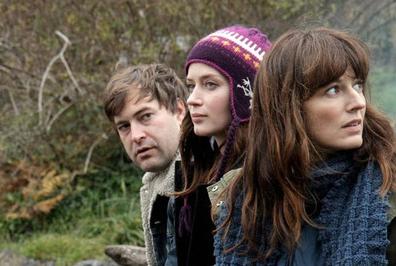 Lynn Shelton insists that her relationship with her sister (step-sister, technically) is nothing but unicorns and rainbows—that's not to say the sibling struggle of others (the Duplass Brothers, for example) haven't provided her ample comic inspiration. Your Sister's Sister is her biggest picture since she began directing in 2008, and it may star Emily Blunt, Rosemarie DeWitt and regular partner in crime Mark Duplass, but it's produced on a scope and scale as modest as some of the indies that pad her early career. According to her, that size of production is essential to successfully managing a shoot with so much improvisation. "If you're not feeling it," she says, "we need to step back" and a big shoot can't really afford to take a break for the actors to regroup and talk backstory. But for as exhausting as exercising constant flexibility might be, the finished product is bursting with energy and boasts the kind of nuanced self-observation common to high-pedigree foreign films. Did I mention it's also really funny?

How did your relationship with your sister filtered into the sibling and sibling-like relationships the actors built.

I really relied on the actors to build those relationships. I have a sister but she's my step-sister and she came into my life when I was about 16. We never actually lived under one roof and we both have brothers so we'd always wanted to have sisters and we just fell into each other's arms wholeheartedly and called each other "sister" ever since. There's nothing but pure love between us. I can't recall ever having tension; it's just been a beautiful blessing in my life so I really didn't have much to draw on. Except maybe from my brother, how was five years younger than I and we had tensions. I have, though, observed many sister relationships and the really tense ones seem to be among sibling closer in age. Though, my mom and her sister had some really complicated dynamics between them and they're seven years apart. It's always been something that's intrigued me enormously and it's not just personal, we were always telling stories, first and second and third hand stories. Improv here worked a little along the lines of how improv worked for Humpday; I don't know what it's like to be a guy so I was really heavily involving the guys to get there.

You make yourself sound very observational.

How do you maintain control then?

I'm the wrangler, facilitator and I set up the phone calls and decide who's invited and say, "I think Emily and Mark and I need to talk, or I just need to talk to Emily and get a sense of who she is and her character." We had these conversations and all kind of stuff shows up to see what'll stick. We had this weekend workshops the summer before we shot and all kinds of crazy thoughts came out and some of them were really exciting. But when I got home I realized some of these ideas contradict each other and you're trying to create backstory to support an interesting plot and sometimes backstory can't provide what plot needs—or vice versa—but ultimately I'm the one who says "yay or nay" but we're all always on the same page and I come back to them and say "here's what I could make work" on the script or the treatment or the scriptment, and I keep them involved all along the way. It's a very ego-free feeling. I hope, to them, it doesn't feel like I'm coming down with an iron hammer saying, "these are sweet ideas but here's where we're really going." Authenticity is the guiding light and even if absurdity happens in the plot it's never so absurd it wouldn't happen in life; if it's within the realm of human behavior it's fair game. I love characters that do unexpected things.

It's funny you're drawn to the dramatic shifts because your film is built on subtle ones. In one scene, the girls are sharing a bed and the camera focus shifts from one girl to the other, effectively handing off the scene as the dialogue changes-it points to deeper stories but it's not about the dramatic moments.

What unfolds—one behavior that leads to another and another—does reveal deeper secrets, so stuff happens and does hinge on nuance but one of my favorite scenes in the film is so short, Hannah is changing the sheets and Iris says ‘you don't have to change them' and Hannah says her relationship ended and she's dropped this big news but the going tension still revolves around "why are you still changing the sheets?" It encapsulates everything about this sister relationship. The actresses nailed it because they found every little nuance and are getting on each other's nerves during this bonding moment and it's so real. It's the combination I like—the nuances and the major dramatic turns are never on their own.

You said "authenticity" and just said "real" but it sounds like a balancing act that leads to discovery-as if seeking is a key.

We do all this background to create a context so that when actors are on set they know who they are and are grounded enough to play out the scene. They can embody their characters—I've said they're slipping on their characters like a glove and they have so much backstory to guide you through the scene. So often you're on set and someone's not feeling it and we have to stop everything and regroup and try to figure things out. If anyone's not feeling it we have to step back. In most sets if you're not feeling it the director has to come to you and talk you through it so you can get to the next scene, but here if we couldn't feel something we had to work it through before going back to it. We were so small and working so intimately, we weren't part of a bigger machine that needed to push forward to keep the gears together. Also, as a director, I'm improvising as much as they are and I have to be on my feet and willing to go with whatever is best for the film and the story at that moment and I'm able to do that because the structure of our work makes it possible.

How did Emily Blunt get involved?

I saw her in Sunshine Cleaning and fell for her—felt she was so intriguing-and then realized she'd also been in Devil Wears Prada. Mark had called me up with the premise for an idea and we were looking for someone in their mid-late-20s who was likable and could be read as a best friend and a possible romantic interest and luckily her agent was a big fan of Humpday and found out he was friends with my manager, I got to call her and talked to her about our process and at that point didn't even know if she could improvise. You know, some actors really rely on the script as a spine for their work and that's why I'll never give up on working with scripted projects, because I always want to work with a wide range of actors. Well she brought up her first film, a picture called My Summer of Love which was completely unscripted. I was excited because she'd done it before and was willing to do it again and she pretty much said, "yes" in that first conversation and I hadn't realized I'd seen that film and I had no idea it was her and it was improvised. I wish more people had seen it. It was so visually stunning it gave me the sense I could raise the sophistication of the visual-giving a sense of place but also isolating people in landscape when they're lonely and I was trying to do that here as well.

I have a film called Laggies by a young writer named Andrea Seigel. Anonymous content is producing, I read it a month ago and fell in love. Alex Madigan from Winter's Bone is working with me and we're hoping to start shooting by early 2012.

Is there a chance of it being another improvisational effort?

It's scripted! But I'm definitely in the camp of whatever works. Even if I'm working with a script, I'm not precious with it. I hope my experience working this way will benefit me in other places. It worked great when I worked on Mad Men.

Is that where you found Rosemary DeWitt?

No! We needed a replacement and as soon as she popped into my head I really wanted her. Luckily by that point she had seen and loved Humpday and was game to try improv.

Since you have a smaller, or rather, lesser known cast for Humpday, do you feel you had more room to push envelopes?

No, it just happened to be a less edgy story. But even working here we didn't have to come up with fee, we paid everyone on the back end, so we didn't do a thing we didn't want to because we were held to a fee or a contract. The freedom was important.