close
Do All Alien Films Have to Be Xenophobic?

Alien as Predator: What we're really talking about when we talk about alien invasion movies 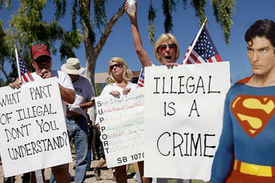 There's something squicky about the new movie The Watch, starring the comedy dream team of Ben Stiller, Vince Vaughn, Jonah Hill, and Richard Ayoade. It's not the ubiquitous green goo or the repeated references to Stiller's semen. (Been there, done that!) It's the obvious subtext of a suburban fortress of white-itude having to be defended at all costs against invasion by dark, dangerous outsiders. Back in March, the real-life tragedy of Trayvon Martin's shooting death in a Florida gated community forced the studio to change the film's original title, Neighborhood Watch, after it was revealed that Martin's alleged killer, George Zimmerman, acted in his capacity as a neighborhood watchman. The Watch's initial scenes actually bend over backward to distance Stiller's character, Evan Trautwig, from Zimmerman—Evan congratulates one of his Latino employees on his recently gained citizenship, acts genially to his Indian and Korean neighbors, and serves as a strong contrast against the block's graying, gun-toting redneck who literally yells at people to get off his lawn. But as the movie progresses, the film completely drops these early affirmations of multiculturalism and quickly conflates whiteness with homeland, and foreignness with menace. As one of the invading aliens tells Evan with a shrug, "We come to planets, we destroy them. That's what we do."

The Watch's xenophobia isn't blatant—it's just lazy. And it's not unlike the way Hollywood passively but persistently casts white actors in 90% of its roles. In the 1950s and 1960s, alien invasion flicks like Invasion of the Body Snatchers and The Blob played on fears of Communists and immigrants—not to mention sudden death from above—and tapped into a preexisting "us versus them" mentality. All subsequent alien invasion films have inherited this political baggage, and most, including The Watch, indifferently accept it. Even as America becomes ever more visibly a land of immigrants, as it always has been, foreigners continue to be almost exclusively depicted as destroyers and infiltrators.

While there are a thousand and one films that feature blandly evil aliens—say Independence Day, War of the Worlds, and Battleship—Hollywood occasionally attempts to make a xeno-philic "literal aliens as legal aliens" movie. But even these "progressive" films about extraterrestrial immigration have disappointingly retro views. Take Alien Nation, a 1988 buddy cop drama about a grizzled human detective (James Caan) and his newbie alien partner (Mandy Patinkin). Three years before, 300,000 aliens landed on Earth and assimilated into Angeleno society, and the odd-couple officers investigate a series of deaths in the "Newcomer" part of town. The movie is basically one long PSA about how if you really got to know the aliens, you'd learn they weren't so different from you. But this pat message completely avoids the fact that the film portrays "good immigrants" as cucumbers—green on the outside, white on the inside—who conform precisely to the norms of their adopted planet. There's nothing welcoming about approving of visitors only when they think and behave exactly like you.

Even worse is the trope of aliens who earn their citizenship by altruistically helping out natives, as if they wouldn't deserve to be accepted as equals if they didn't drop everything in their life to rescue a hapless white person. Consider Superman: the Man of Steel, a testament not just to square, Midwestern values, but also to Hollywood's strange obsession with the notion that immigrants exist to better the lives of native-borns (also see: Magical Negro, Sassy Black Friend, Wise Old Indian). In 1978's Superman, Clark Kent (Christopher Reeve) doesn't just cast his heritage aside by rejecting his alien dad's advice for that of his earth dad—he also constantly goes out of his way to help Earthlings, thus defining the ideal immigrant as one who performs endless, life-risking service to his new country. (Note that the inverse—a earthling integrating into an alien society—is usually an opportunity for a white savior to not just rescue but rule that society, a la Avatar and John Carter. When's the last time an alien dude or dudette saved our planet and was rewarded with governance over humanity and marriage to Earth royalty?

A new high in fictional alien-Earth relations was reached in 1997's Men in Black, which received several notices from critics for its progressive take on immigration issues. True, the extraterrestrials of MIB were by and large "normal," even cute, with the exception of the rare individual who wanted to commit planeticide. MIB's aliens, in fact, are exactly the kind of immigrants whose presence seem to be least objectionable: refugees, small-business owners, the ultimate assimilationists. But by the time the franchise's third installment came around, real life intruded into fiction, and retroactively cast the G-Men in a much less flattering light. In a post-9/11, post-Arizona SB 1070 America, where the rights of anyone who doesn't look "American" enough have been dramatically curtailed, Agents J (Will Smith), K (Tommy Lee Jones), and the rest of their initialed ilk make for morally questionable figures, since our heroes' job is the constant, unannounced monitoring and interrogation of immigrants' lives, lest they endanger humanity.

If well-meaning sci-fi screenwriters feel like tackling the issue of immigration, assimilation, and integration, they could start by ceasing to depict foreigners as grotesque monsters. But this isn't why most of us go to the movies: we want heroes and shoot-em-ups and happy endings. It's not bad to want or have these experiences—they're part of how we cope with and take pleasure from life. But it's also important to rid ourselves of our Cold War xenophobia and embrace a multi-hued America. If invaders from space actually landed on Earth, the men and women fighting them off wouldn't be lily-white, and the movies should reflect that fact. This is a pretty radical idea for Hollywood, but maybe it should try harder to shed its racist, jingoistic legacy from the Joseph McCarthy/George Wallace years and have America protected and represented by, say, Djimon Hounsou and Michelle Rodriguez and John Cho, instead of a white guy, his two white friends, and one token minority. We've seen that movie before.