close
Boy gets bitten? Boring. How about boy has spider-babies?

Five Ideas Worth Rebooting Spider-Man For 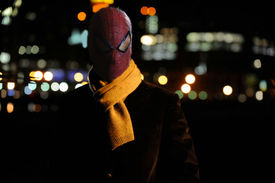 The reviews are in, and the critics—if not the fans—agree: we don't need another Spider-Man film about Peter Parker going from loser-nerd to bite victim, and grieving nephew to acrobatic crimefighter. While the crazy-in-love chemistry between Andrew Garfield and Emma Stone distinguish The Amazing Spider-Man from the many, many other boy-puts-on-leggings-and-fights-evil movies, the film's overwhelming similarity to its 2002 predecessor emphasizes the need for Spidey to face some new obstacles. Here are five Spider-Man stories we'd much rather sit through in 2022 than another origin-story reboot:

The Net 2 — In the era of blogs, camera-phones, and "citizen-reporters," one of the most anachronistic things about Spider-Man is Peter Parker's ability to support himself as a newspaper photographer. An updated thriller finds the webslinging superhero (Jesse Plemons) forced to search for a new job when J. Jonah Jameson's The Daily Bugle lays him off. The New York Police Department quickly offers Spider-Man a contractor position. (Why not a full-time job with benefits? Are you kidding—in this economy?) But since Peter is determined to take the job without revealing his identity, he must get a Social Security number and a driver's license for his alter-ego. But with no birth certificate or proof of citizenship, Peter is forced into a Kafkesque bureaucratic journey in which he must prove that Spider-Man exists, while trying to pacify the riot-inciting birthers who claim he's an alien.

The Amazing Spider-Manhood — Has there ever been a more lovelorn superhero than Spider-Man? Peter Parker (Michael Fassbender) wakes up one morning with the realization that his unabashed romanticism has served him very badly in life. His greatest loves—Mary Jane Watson, Gwen Stacy, Felicia Hardy—have all died or become institutionalized for trauma after their repeated kidnappings. Dead-eyed and desperately guilty, Peter—or rather, Spider-Man—compulsively picks up women every night of the week, convinced he should keep away from love for their sake, yet too lonely to stay away for long. Even when he begins to neglect his crime-fighting duties, Spider-Man only turns down one-night stands when they insist he remove his mask in the bedroom. When he begins to develop an unsavory reputation for using and losing women, Aunt May (Gena Rowlands) drives up from her retirement community in Florida to help him learn to love again. No, not that way. Gross.

When Peter Met Bruce — Peter Parker (Bill Hader) has always had trouble making male friends who didn't later try to kill him. Things seem to be finally looking up when he and Bruce Banner (Zach Galifianakis) embark on a bromance to end all bromances after meeting in a therapy group for radiation victims. They bond over not just the accidents that made them, let's face it, freaks, but also by sharing battle scars, training for future fights, and geeking out over the latest scientific developments. When Bruce learns of an unproven cure for his radioactive temper, Peter valiantly tries to convince his new pal that his super-strength is worth keeping. But Peter didn't anticipate how badly Bruce wants out of the superhero gig, and when the cure doesn't work, the un-jolly green giant goes on a kamikaze rampage through Metropolis in the hopes that Superman's (Jon Hamm) severe sense of right-and-wrong and overwhelming force will be strong enough to kill him suicide-by-superhero style while fending off Peter's efforts to save him from himself.

Marie Curie: Goblin Slayer — There's nothing special about Peter Parker receiving a bite from a radioactive spider. It could've happened to anyone—and it did. From the producers of Abraham Lincoln: Vampire Hunter comes the story of the world's first human-spider hybrid, Marie Curie (Amanda Seyfried), the discoverer of radioactivity. An irradiated arachnid chomps on Pierre (Liam Neeson) and Marie Curie, turning him into an eight-legged goblin and her into a superpowered hottie. (Radium is weird that way.) While a berserk Pierre hides in the sewers, Marie quickly fakes their deaths by cancer from radium exposure. When Pierre starts turning the stone gargoyles of Notre Dame into real monsters (radium is seriously crazy, you guys), Marie finally confronts her husband and former lab partner, armed with exploding test tubes concealed in her bustle and garters.

Webbing Crashers — Peter Parker (Bradley Cooper) has always been burdened by the great expectations placed upon him by his father figures. His efforts to live up to the moral standards of Uncle Ben, Captain Stacy, Doctor Osborn, etc., have made him the great man that he is, but Peter also wants to give his three red-headed boys the worry-free childhood he never had. When love—in the guise of Tracy (Drew Barrymore)—finds the middle-aged widower, Peter marries his new love right away. But the newlywed couple find it hard to agree on how to raise their little boys. Peter, for instance, doesn't mind that his prepubescent boys swing around their giant surburban home and leave sticky white string all over the house. Tracy, meanwhile, is afraid that Peter will force any children they have together to become superheroes. ("With great power," etc.) When Tracy finds out she's pregnant, she must decide whether their romance can survive not just childrearing, but a brood of flying spider-children.