close
Because you're not in the mood for a talking mammoth 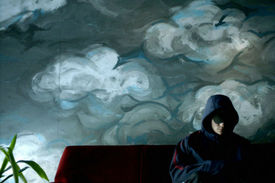 THE IMPOSTER, our favorite flick of the week

THE OBAMA EFFECT
Director Charles Dutton is most known for playing the minister in David Fincher's Alien 3, but here he writes and directs a cheery bit of propaganda throwing his support behind President Obama's reelection campaign. Dutton stars as a corporate man who has a heart attack and realizes his number one priority is getting Obama elected, even if that means begging money from his wealthy Republican friends like comic Katt Williams, playing a right-winger who snorts cocaine and loves orgies. Soundtrack by Cee Lo Green.
Director: Charles S. Dutton
Writer: Charles S. Dutton
Stars: Katt Williams, Meaghan Good, Charles S. Dutton
Genre: Comedy

PONIES
Drazen makes a living on the ponies—it's harder than it sounds—and though he calls his gambling "a living," everyone knows it's an addiction. When he meets a immigrant who shares his good sense and strangely similar sob story, he takes him under his wing. But then the cops get involved. Everywhere is a track for Drazen, and all the man can do is race.
Director: Nick Sandow
Writers: Mike Batistick
Stars: John Ventimiglia, Kevin Corrigan and Babs Olusanmokun
Genre: Drama

UNION SQUARE
From the producer of Rachel Getting Married comes another tale of sibling-endangered nuptials. Jenny pretty much divorced her family, but now her hot-mess sister is on her doorstep: destitute, with dog, and just in time for Jenny's wedding. The last thing Jenny needs is a reminder that "family is forever" is always longer than "'til death do us part."
Director: Nancy Savoca
Writers: Nancy Savoca, Mary Tobler
Stars: Tammy Blanchard, Mira Sorvino, Michael Rispoli
Genre: Drama

DRUNKBOAT
Mort drinks to forget Vietnam, but he needs a place to drink and for that, he wheedles his sister to let him crash at her home. She doesn't want her son to hang around Mort, but she's gotta go out of town and better the boy have some guardianship than none. Of course, the minute she goes, he attempts to buy a boat. And when that gets rough, Mort decides to float in Cutty Sark.
Director: Bob Meyer
Writers: Bob Meyer, Randy Buescher
Stars: Dana Delany, Brian Deneen, John Goodman
Genre Drama

NIPPLES AND PALM TREES
A painter named Jackson (played by artist Matthew James) could be more prolific, but he couldn't be more promiscuous. He'll complain he can't find a nice girl—but it only takes about four minutes for him to stumble onto a willing playmate. He's hardly model-esque but whatever his allure, the women love him. Boredom is on the horizon but, for now...whatever.
Director: Dylan Reynolds
Writer: Matthew James
Stars: Akihiro Kitamura, Dallas Malloy, Matthew James
Genre: Comedy

THE IMPOSTOR  **OUR FAVORITE FLICK OF THE WEEK**
Director Bart Layton presents the true story of the Barclays, a family from San Antonio, Texas whose son Nick disappeared when he was 13. Three years later, they found him. Or so they thought. Their newfound son was really a 23-year-old French-Algerian imposter called "The Chameleon" by French authorities. When you're desperate for your son, you'll believe anything.
Director: Bart Layton

BALL PLAYER: PELOTERO
This Dominican Republic baseball coach likens his work to farming: "You plant the seed, water it, clear the land and when it grows, you sell it." Considering 20% of the baseball players (peloteros) in the Major League come from the Dominican Republic, that's a hell of a farmer's market. And the boys who hope to be discovered by the American recruiters are changing their lives when the bartering begins.
Directors: Ross Finkel, Trevor Martin, Jonathan Paley

DECONSTRUCTING DAD: THE MUSIC, MACHINES AND MYSTERY OF RAYMOND
Raymond Scott was the bandleader on the TV show Your Hit Parade, and a widely accepted musical genius. He didn't just invent a sound, he made his own instruments of modern tools—it's the kind of thing that stuns audiences and confuses the heck out of kids, which is likely why Scott's son Stanley Warnow interviewed some of the world's most important composers about his father. Who better to deconstruct dad?
Director: Stanley Warnow

I AM
The center of pop music in 2012 isn't LA—it's Seoul. Boy bands, girl bands and pop icons are big business in Korea, which is why director Jin-sun Choi rounded up 32 singers and dancers for this round-up of what's rocking around the world. If your image of Korea needs an update, this is a perfect high-energy dose of this modern, music-mad country.
Director: Jin-sung Choi

IT'S THE EARTH NOT THE MOON
In 2007, a sound man and a filmmaker arrived on the isle of Corvo in the Azores archipelago, a small island chain 800 miles west of Portugal in the Atlantic Ocean. Though its population is small—just 440 people—and its history only 500 years old, the culture's lack of written records has resulted in this much-needed documentary.
Director: Goncalo Tocha

FAMILY PORTRAIT IN BLACK AND WHITE
Olga Nenya adopted 16 children, and not one of them is her race. Her colorful kids aren't accepted in their small Ukranian hometown whose inhabitants range from bigoted to hostile. The quantities of food Olga makes for every meal are amazing, but more incredible is the connection of the mother to her adopted children—they're kids no one else wants, and they're her flesh and blood.
Director: Julia Ivanova

2016 OBAMA'S AMERICA
Based on Dinesh D'Souza's book of the same name, this doc lodges its criticisms of Obama in time for the 2012 election. With footage of African Americans in conflict and white boy scouts in happy parade formation. Do what you will with that.
Directors: Dinesh D'Souza, John Sullivan

EASY MONEY aka Snabba Cash
Before Swede Joel Kinnaman of The Killing was chosen for Robocop, he played a high-end coke overlord running at the speed of house music in this Swedish thriller based on Jens Lapidus novel. The popularity of this film inspired a sequel and The Weinsteins to pick it up for U.S. theatrical distribution. For a view of this baddie in softer circumstances, watch him dump Greta Gerwig in Lola Versus.
Director: Daniel Espinosa
Screenwriter: Maria Karlssom
Stars: Joel Kinnaman, Dejan Cukic, Fares Fares, Lisa Henni, Dragomir Mrsic, Annika Ryberg Whittembury, Matias Padin Varela, Lea Stojanov
Genre: Drama/Crime; Spanish-, Serbian-, Swedish- and English-language, subtitled

VALLEY OF FORTITUDE/Gei Oni
Fania enters Israel at the turn of the century, her father on one side, her dangerous brother on the other, and in her arms a child born to her by rape. Quickly she's married off to a young widower with two children, but they struggle. She finds her success in Muslim robes and a man's world.
Director: Dan Wolman
Writers: Dan Wolman
Stars: Tamar Alkan, Zion Ashkenazi, Ya'ackov Bodo
Genre: Hebrew-language, subtitled

ALPS/Alpeis
An emergency medic, a nurse, a gymnast and her trainer form a clandestine group to invent a strange form of therapy—one that benefits them more than their clients. They enter the home of mourning families and play-act conflicts the families had with their deceased. Bodies are interchangeable—sort of—in this drama by the writer/director of Dogtooth and Attenburg.
Director: Giorgos Lanthimos
Writers: Giorgos Lanthimos, Efthymis Filippou
Stars: Stavros Psyllakis, Aris Servetalis, Johnny Vekris
Genre: Drama; Greek-language, subtitled

FAREWELL, MY QUEEN
Based on the novel by Chantal Thomas, Farewell, My Queen conjectures about a romance between Marie Antoinette and one of her servant girls. Leading feverishly to the storming of Versailles, the Queen flirts with her female consorts—until her morals earn criticism and the mobs beckon.
Director: Benoît Jacquot
Writers: Benoît Jacquot, Gilles Taurand
Stars: Diane Kruger, Léa Seydoux and Virginie Ledoyen
Genre: Drama; French- and German-languages, subtitled

COCKTAIL
Gautam dreams of emigrating to London, but before he can, his mother insists on finding him the perfect bride. Instead of telling him, however, she persuades the girl's parents to put their daughter on a plane with her son. A bit of forced coincidence is meant to make magic in the (literal) heavens. Perhaps that's why they need cocktails.
Director: Homi Adajania
Writers: Imtiaz Ali, Sajid Ali
Stars: Deepika Padukone, Saif Ali Khan, Randeep Hooda
Genre: RomCom; Hindi-language, subtitled