close
Because why not turn your trip to see 'The Dark Knight Rises' into a double feature? 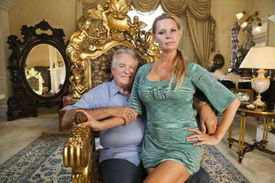 'The Queen of Versailles,' our favorite flick of the week

30 BEATS
A hopeful romcom about the possibilities of finding love in sex, 30 Beats might be a loose adaptation of Max Ophüls' La Ronde. 30 Beats owes little to literature, but much to the chances we take on metropolitan streets when every stranger we haphazardly pass could be someone we'll know naked.
Director: Alexis Lloyd
Writer: Alexis Lloyd
Stars: Jennifer Tilly, Jason Day, Vahina Giocante, Paz de la Huerta
Genre: Comedy

SALUTE
The 1968 Olympics were fraught with socio-political tensions: when the gold and bronze medal winners—both from the U.S.—gave the Black Power Salute from their pedestals, it became one of the 20th century's most iconic images. Australian Peter Norman won the silver, and stood silently between the two. This doc by his nephew confirms his respectful complicity with the moment and his running mates.
Director: Matt Norman

STRONG!
Cheryl Haworth is a prodigy weight lifter. By 15 she was an American star, by 19, an Olympian. Now 29, this hefty cherub who can kick anyone's ass faces retirement.
Director: Julie Wyman

WAGNER'S DREAM
Wagner's Ring Cycle is the Mount Everest of operas—a six-hour magnum production based on the epics that formed the German national identity. Even if we'd made an opera out of Johnny Appleseed, Pocahontas and the Alamo combined, it wouldn't be this big. This is the story of how the Metropolitan Opera House slayed the beast.
Director: Susan Frömke

LUNG NEAW VISITS HIS NEIGHBORS
This 154-minute film tracks Lung Neaw through the rice patties and brush of his village. A Mexican/Thai coproduction, this doc hopes that by showing the quiet and resonant existence of one man in complete self-sustenance, it can inspire viewers toward a simpler path.
Director: Rirkrit Tiravanija
Thai-language, subtitled

QUEEN OF VERSAILLES  **OUR FAVE FLICK OF THE WEEK**
This doc rocked Sundance. A pyramid schemer drags down his family, but his society wife's spirit and bouffant are unsinkable. While the queen of their home (called Versailles) waits for the taxman to come, she's keeping their spirits afloat-that's admirable, no matter the income bracket.
Director: Lauren Greenfield

FIXING THE FUTURE
I say "Anthony Bourdain," and you say "the guy who travels to eat!" but I say "David Brancaccio" and most draw a blank. Like Bourdain, Brancaccio goes from town to town hungry, but instead of hoagies, Brancaccio seeks the next solution to America's damaged economy. He finds people building business alliances, community banks and work cooperatives. According to him, it's all local.
Director: Ellen Spiro

SHUT UP AND PLAY THE HITS
LCD Soundsystem didn't dissolve into hurt feelings and bad romances like most bands do when they break up. They broke up like professionals. They had a farewell album, a Madison Square Gardens send off, and then...well, then what? This sexy doc by the directors of Blur: No Distance Left to Run is sleek, savvy and hip enough to make fans of casual rockumentary auds.
Directors: Will Lovelace, Dylan Southern

THE RUNWAY
Oscar Nominee Demián Bichir stars as a lost pilot whose plane crashes in County Cork. A fatherless boy meets grows quickly attached to the man he's sure is his father. So the boy convinces the town to build a runway to help "dad" home. Based loosely on the 1983 true story that made Mallow, Ireland an international name for one bittersweet moment.
Director: Ian Power
Writer: Ian Power
Stars: Demián Bichir, James Cosmo and Kerry Condon
Genre: Family

THE WELL DIGGER'S DAUGHTER/La fille du puisatier
Daniel Auteuil plays the father of a graceful girl who falls for a wealthy boy. No sooner than he has her, he leaves her. Auteuil tries to marry her off to a good man, a well-digger like him, but she loves the rich cad who puts her in the family way.
Director: Daniel Auteuil
Writers: Daniel Auteuil
Stars: Daniel Auteuil, Astrid Bergès-Frisbey, Nicolas Duvauchelle
Genre: Drama; French-language, subtitled

HARA-KIRI: DEATH OF A SAMURAI
Takashi Miike has a reputation for violence, evident her in this story of feudal Japan follows a struggling samurai, determined to defend his honor in a culture not interested in his survival.
Director: Takashi Miike
Writers: Kikumi Yamagishi
Stars: Kôji Yakusho, Naoto Takenaka, Eita
Genre: Action; Japanese-language, subtitled