close
Because there's even funnier movies than Ben Stiller's latest 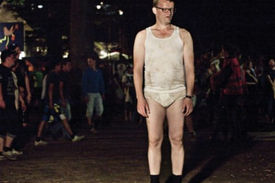 The Danish comedy KLOWN, our favorite flick of the week

HOME RUN SHOWDOWN
Most of the team was cut last practice, but these two 12-year-olds who suck at baseball still think they have a fighting chance. These scheming tots recruit a drop out, ex-minor-leaguer to lead them against their old team, and the director has found other real-life minor-leaguers to make cameos in support.
Director: Oz Scott
Writers: John Bella, Tim Cavanaugh
Stars: Matthew Lillard, Dean Cain, Annabeth Gish
Genre: Family/Sport

FALLING OVERNIGHT
A young man with a tumor falls for a free spirited photographer. He tells her: "They say you should live like you're dying...but that sounds pretty stressful." And so these two pretty twentysomethings wile away one night, sifting through their anxieties to find a romance.
Director: Conrad Jackson
Writers: Aaron Golden, Parker Croft
Stars: Parker Croft, Emilia Zoryan, Barak Hardley
Genre: Drama/Romance

DIGITAL DHARMA
Gene Smith was a Utah-born Mormon, but his interest in Buddhism led him to assist Tibetan refugees displaced by the Red Army. Witnessing the consequences of the loss of homes and temples, as well as the culture and records they protect, Smith is determined every Sanskrit and Tibetan text he can in service of preserving a culture marginalized at home.
Director: Dafna Yachin

RUNAWAY SLAVE
According to Pritchett Cotten and the black men and women he interviews in this doc, the government is imposing a brand of slavery upon African Americans that's got nothing to do with chains. While racism can seem an outdated problem, black men and women are still beset with a governmentally ordained set of limitations—among them, the welfare state.
Director: Pritchett Cotten

AI WEIWEI: NEVER SORRY
This doc by China-stationed journalist Alison Klayman promises to show us the day-to-day of conceptual artist Ai WeiWei. His work draws attention to how China has failed its citizens and proves that dissent can be patriotic. Poised somewhere between art and activism, all of his installations enact a critical love for a China he knows can be greater than it already claims to be.
Director: Alison Klayman
English- and Chinese-language, subtitled

SEARCHING FOR SUGAR MAN
Today, he's vanished. But in the '70s in Cape Town, Rodriguez was a rock star on par with The Beatles or Simon and Garfunkel. His messages of disenfranchisement spoke to the Apartheid-saddled South—which may account for his lack of recognition just about everywhere else. Malik Bendjelloul follows one record shop owner's search for answers and finds not a man, but a poignant mystery.
Director: Malik Bendjelloul

PLANET OF SNAIL
Young-Chan is a blind and deaf poet who moves at a snail's pace through our overwhelming world. His sweetheart is a woman named Soon-ya. Born with a spinal deformity he can't see, she communicates with Young-Chan through a form of touch braille. They've invented a form of communication that seems flatly practical, yet somehow not of this earth.
Director: Yi Seung-jun

ABENDLAND
Europe is a famously comfortable continent. Their civic planning was so thoroughly well designed, it's lasted them centuries. But all this progress and established civilization has a dark side—at least, so thinks documentary vet Nikolaus Geyrhalter who prowls the night searching for proof his Europe is nefarious and nocturnal.
Director: Nikolaus Geyrhalter

BIG BOYS GONE BANANAS!*
In 2009, two Swedish documentarians released Bananas!*, a disparaging flick about Dole Foods. Naturally Dole didn't want the film to come out—especially not when they were already being sued across South American for their misdeeds. So they sued the Swedes, and the result is this documentary sequel about this David vs. Goliath case.
Director: Fredrik Gertten

CONVENTO
A Dutch artist moves to the country and gets primitive in this SXSW doc. This means wearing pelts and helmets, spraying paint like it's a weapon, and turning bird skulls into doorbells.
Director: Jarred Alterman

IRON SKY
With the shame of the earth raining down upon the defeated Third Reich, a handful of Nazis with access to uber-technology take a shuttle to moon where they establish a Spartan training base and raise an army to return to earth and complete their plans for world domination. Also featuring Udo Kier and girl soldiers in super-tight Reich-wear.
Director: Timo Vuorensola
Writer: Michael Kalesniko
Stars: Julia Dietze, Udo Kier, Peta Sergeant
Genre: Action/Comedy; German- and English-language, subtitled

NUIT #1
Avoiding morning-after complications, Clara tries to tiptoe out of Nikolai's apartment, but he stops her with sharp criticism, when she really just wishes he'd talk her into staying. It's a wonder these self-protective two can even participate in a conversation, but the fact they're talking makes their pursuit of a connection all the more raw.
Director: Anne Émond
Writer: Anne Émond
Stars: Catherine de Léan, Dimitri Storoge, Véronique Rebizov
Genre: Drama; French-language

KLOVN: THE MOVIE **OUR FAVE FLICK OF THE WEEK**
Even in an in-crowd of idiots, Frank's an idiot apart. Wealthy and matched with a too-forgiving woman, Frank skates through life, navigating the stunningly bad advice of his peers on his path to even more career success. But when his girlfriend gets pregnant, she hides it from him, citing his lack of "fatherhood potential." So he kidnaps her nephew for a canoe trip that'll prove he's dad enough for her. Oh, and he's in his underpants a lot.
Director: Mikkel Nørgaard
Writers: Casper Christensen, Frank Hvam
Stars: Frank Hvam, Casper Christensen
Genre: Comedy; Danish-language, subtitled

SACRIFICE
After the birth of an heir, a clan is massacred and the attending doctor hides the baby and raises him in secret. The boy has a birthmark on his forehead (what's up, Harry Potter), and training is clandestine (like a less mystical Hogwarts) but once grown, the boy can return to the place he's told is home, and leave behind the guardian once thought was his father.
Director: Kaige Chen
Writer: Ningyu Zhao
Stars: You Ge, Xueqi Wang, Xiaoming Huang
Genre: Drama/History; Chinese-langauge, subtitled

DERANGED/ Yeon-ga-si
People are throwing themselves into the river—it's a deliberate drowning epidemic. One doctor finds a family with symptoms to this aggressive but temporary death wish and he tries to beat the clock to find the antidote that could save them and the town.
Director: Jeong-woo Park
Writer: Jeong-woo Park
Stars: Moon Jeong-hee, Dong-wan Kim, Ha-nui Lee
Genre: Thriller; Korean-language, subtitled

BURNING MAN
This Australian drama stars Matthew Goode (A Single Man, Leap Year) as a passionate chef who loses his wife and finds naughty solace in swarms of women. In the melee though, he loses sight of his son—an anchor that could keep him from going too far from shore.
Director: Jonathan Teplitzky
Writer: Jonathan Teplitzky
Stars: Matthew Goode, Rachel Griffiths, Bojana Novakovic
Genre: Dramedy