close
Because you already saw 'The Amazing Spider-Man' on Tuesday 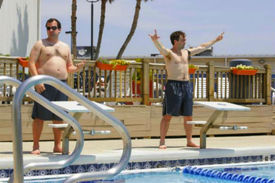 Two out-of-shape brothers face off in THE DO-DECA-PENTATHLON, our pick of the week

THE PACT
In this horror flick, a grieving daughter rouses a spirit in her otherwise quiet home, again proving ghosts are totally happy to chill until people get up in their business. The daughter hires a ghost whisperer—and then she also grabs a kitchen knife.
Director: Nicholas McCarthy
Writer: Nicholas McCarthy
Stars: Caity Lotz, Casper Van Dien, Mark Steger
Genre: Horror

CRAZY EYES
Zach has too much money and too many women. Still, when he sees a brunette he dubs "Crazy Eyes" across the bar, he's hooked. He's a mess, but she's a hot mess. And that smells like redemption to a guy who got his priorities out of a Bret Easton Ellis novel.
Director: Adam Sherman
Writers: Adam Sherman, Dave Reeves
Stars: Lukas Haas, Madeline Zima, Jake Busey
Genre: Drama

COLLABORATOR
After a bad show, a playwright flees to his mother (Katherine Helmond, always reminding us of Brazil) and meets her neighborhood's reformed criminal (David Morse). The ex-con invites the playwright for a beer and when the cops arrive uninvited, the crook gains a gun and a hostage. Is there no such thing as hospitality in Los Angeles?
Director: Martin Donovan
Writer: Martin Donovan
Stars: Martin Donovan, David Morse, Olivia Williams
Genre: Dramedy

THE DO-DECA-PENTATHLON  **OUR PICK OF THE WEEK**
Manhood and maturity are at odds in this Duplass Brothers comedy made before they broke out with The Puffy Chair. Mark is turning 40, but around his brother he'll always be 14. When one instigates a 25-event competition in embarrassing athletics, the brothers go all in with no shame and plenty of sweat.
Directors: Jay Duplass, Mark Duplass
Writers: Jay Duplass, Mark Duplass
Stars: Mark Kelly, Steve Zissis, Jennifer Lafleur
Genre: Comedy

CHINA HEAVYWEIGHT
Like Yung Chang's last doc Up the Yangtze, this is about a generation experiencing their adolescence alongside their country's. Coach Qi Moxiang recruits peasants and trains them as boxers. He says: Train hard and "you'll be the country's people. You don't, you're just your mother's." A more poignant and pressing model of overcoming hardship is hard to find.
Director: Yung Chang

UNITED IN ANGER: A HISTORY OF ACT UP
ACT UP began with just a bunch of people from NY's LGBT community. They knew people were dying because of Reagan's media freeze on AIDS reporting and the medical establishment's avoidance of research. Initially thought of as a gay disease, AIDS was viewed with religious scorn surprising political indifference. ACT UP answered that cruelty with anger and have continued to fight.
Director: Jim Hubbard

BOL BACHCHAN
A city boy relocates to the country, where he accidentally defaces a temple and has the junior-league idea to blame his imaginary twin brother for it—it was all he could come up with when confronted by the town's torches and pitchforks. Hijinks, bus crashes, explosions and kung fu fighting ensue.
Director: Rohit Shetty
Writer: Yunus Sajawal
Stars: Ajay Devgn, Asin, Abhishek Ba
Genre: Action/Comedy; Hinid-language, subtitled

DAISIES/ Sedmikrásky
Released in 1966 in its native Czechoslovakia, this previously-banned feminist experiment reaches us via Janus Films. It's a giddy artifact about two girls named Marie who do everything together: think together, play together, date together. (Are all Czech girls are named Marie?) Would make a crazy double bill with the upcoming For a Good Time Call.
Director: Vera Chytilová
Writers: Vera Chytilová
Stars: Ivana Karbanová, Jitka Cerhová, Marie Cesková
Genre: Dramedy; Czech-language, subtitled